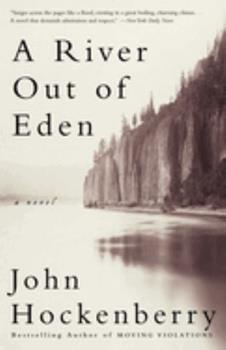 A River Out of Eden

On a night of torrential rain, a warrior appears near the Colombia River, where the Chinook people thrived before the hydroelectric dams came and changed their entire way of life. He has come to reclaim the river, to return it to its original majesty. Soon after, government employees are found murdered with elaborate harpoons. As the body count grows, Francine Smohalla, a government marine biologist of Chinook and white descent, embarks on her own...

Published by Thriftbooks.com User , 21 years ago
This was a very well written first novel. The stream of consciousness technique used by Hockenberry may be more difficult to grasp for readers who do not like to think too much. This novel demands deep thought, and awakens us to look closely at issues most of us prefer to ignore. Bigotry, Alcoholism, Suicide, Spirituality, and Greed all swirl in the reader's mind much like the water of the river. The flow of thought addresses all of these issues, but leaves no answers. Hockenberry is asking us to each find our own answers, and find our own paths just like the river that he writes about. I particularly liked the fact that some common misconceptions about Native Americans were addressed. Today, many people are angry that Native Americans have what they think are special rights. I hear people complain about the money they lose at casinos owned by tribes, yet they choose to go there and spend their money. These same people complain about reservation land, because they have no understanding of what it is about. Reservation land was placed under trust status in order to protect it in 1934 under the Wheeler-Howard Act. When land was first alloted to individual tribal memebers, much of it was lost. Trust status exempted it from taxation, and it could not be sold or leased without prior approval from the BIA. Native Americans were declared citizens in 1924, but they had restrictive voting rights and were denied state welfare and social benefits until 1968, when a special Indian Rights Section was included in the Civil Rights Bill, which guaranteed equal citizenship rights for American Indians. This same bill also gave legal jurisdiction over reservations to the to the tribes. Too many people associate "Indians" with alcoholism, ignorance, and poverty. Hockenberry takes us past these misconceptions, showing both the good and the ugly. He also explains clearly what it means to be of mixed blood, as many Native Americans are today. Often they feel they must choose between being white and being Indian, as they are not allowed to be both. Truly being a Native American, means understanding their culture, history, and spirituality. Ancestry is not enough alone; it must be respected and learned. In this story, both the salmon and the characters struggle to find their way, just as those before them did. The thoughtful reader will question their own thoughts and actions in the past and think of the relevance of their decisions in life both in the past and in the future.

A complex yet brilliant work

Published by Thriftbooks.com User , 21 years ago
Perhaps her plight is that of most Americans as her heritage (as a half- Chinook Indian) battles with her professional life working as a Corps of Engineer marine biologist on the Columbia River. Francine Smohalla cares about both of her worlds even if the divergence leaves her with inner turmoil. She knows the dams built by the Corps have destroyed the life of her people and she realizes that her people want to destroy the dams.However, Francine was not expecting a serial killer to emerge who goes one step further by eliminating those individuals working for the Corps and associated organizations. The evidence accompanying the first corpse discovered by Francine points towards a Chinook Indian as the culprit. As other events add to the heated dispute and the death count grows, Francine worries that her beloved Chinook father is the killer and she begins to investigate.A RIVER OUT OF EDEN is an exciting amateur sleuth thriller that showcases the Pacific Northwest dispute between environment and heritage vs. technology. The story line is fast-paced, enjoyable, and filled with critical details that brings the area and the dispute to life. Although John Hockeberry has too many sub-plots filled with the range of issues diverting the reader at times from his central theme, the author writes a strong tale. Sub-genre readers will find this novel provides insight into a very complex debate inside an entertaining mystery.Harriet Klausner

This book is great for any mystery/thriller lover. Superior

Published by Thriftbooks.com User , 21 years ago
"A River Out Of Eden" sounds like it might be a very pastoral and peaceful novel about a beautiful river. Yes, the river is beautiful, and the country it flows through is likewise pastoral -- and the river is very real. It is the mighty Columbia. Hockenberry has done a great deal of research of the region. Many issues make up this fascinating novel about the Chinook native peoples, the dams on the river, white supremacists, a plutonium researche at Hanford, excessively heavy rain that treatens the strength of the dams. When people begin to show up dead by a strange but familiar harpoon, Francine Smoholla, a marine biologist who happens to be part Chinook Indian decides to do some investigating. This is a real page turner, well worth your time.

Published by Thriftbooks.com User , 21 years ago
Anyone who has lived in the Pacific Northwest or who has visited its magnificent landscape will enjoy this detailed, well-researched novel. Hockenberry's tale of the ancient and modern history, cultural clashes, and immense natural forces of the Columbia River is very different from his memoir, but his readers will continue to appreciate an amazing gift for storytelling.

An extraordinary telling of a complex story

Published by Thriftbooks.com User , 21 years ago
'A River Out of Eden' is so richly layered both in the characters and in the story. It reflects a massive amount of research. John Hockenberry refers to places and situations in the Pacific Northwest that I have been around for 25 years, yet he clearly knows them more intimately than I do. I 'stayed in the book' even after I had finished reading it.
Trustpilot
Copyright © 2022 Thriftbooks.com Terms of Use | Privacy Policy | Do Not Sell or Share My Personal Information | Accessibility Statement
ThriftBooks® and the ThriftBooks® logo are registered trademarks of Thrift Books Global, LLC