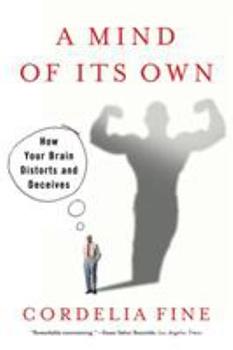 Mind of Its Own: How Your Brain Distorts and Deceives

"Provocative enough to make you start questioning your each and every action."-- Entertainment Weekly The brain's power is confirmed and touted every day in new studies and research. And yet we tend to take our brains for granted, without suspecting that those masses of hard-working neurons might not always be working for us. Cordelia Fine introduces us to a brain we might not want to meet, a brain with a mind of its own. She illustrates the brain's...

Can Your Trust Yourself To...

Published by Thriftbooks.com User , 15 years ago
According to the story, in a survey taken several years ago, all incoming freshman at MIT were asked if they expected to graduate in the top half of their class. Ninety-seven percent responded that they did. And another piece of research in 1989 compared mathematical competence in students in eight different countries. Korean students ranked the highest in mathematical skills, while those in the United States had the lowest rating. Yet the American students had the highest overall opinion of their ability, while the Koreans who had the best results had the lowest opinion of how they had done. Most of us believe ourselves to be to be above average compared with most other people: better drivers, better at evaluating character, more ethical and capable. Indeed when people begin to feel that they are below average that alone can lead to a referral to a psychologist, for it may be a sign of depression or some other disorder. How is it that we are so good at insulating ourselves against reality? That is the core question that Cordelia Fine tries to answer in this, ahem, fine book. She details - perhaps, at times, over-details - a number of fascinating research studies into the very common problem of self-deception and self-distortion. This is a problem that stretches beyond the confines of academic psychology into psychotherapy, personal and spiritual development, relationships and even politics. She coins a nice term - our "Vain brain" - to capture the way in which we distort reality about ourselves and the ways in which the brain biases perception to favor the perceiver. It is a commonplace that when things are going well, we tend to attribute our success to our sterling qualities, while failures are more commonly a result of bad luck and trouble, the perfidy of others or that there were other "reasons" that staked the deck against us. Our brains have a remarkable ability to edit our memories and insights in such a way that it can constantly protect us from the truths that surround us. Cordelia also discusses the way in which the brain warps perceptions to match emotions. She discusses one of the most bizarre things that you will see in clinical practice: the so-called Cotard delusion in which people believe that they, or parts of their bodies, are dead. It most often occurs in psychotic depression in the elderly: the depression drives the thought that they are dead. One of the things that makes this book interesting is that Cordelia also proposes some ways of dealing with the problems of a self-deception driven by unconscious (? preconscious) processes: recognize and acknowledge your brain's scheming, and become aware of the ways in which your brain and mind play tricks upon you; develop greater self-awareness and work to see the world as it is. Though she does not explicitly say so, this is what spiritual teachers have recommended for millennia. She also mentions the way in which we can recruit our unconscious processes to fulfill uncon

A funny thing happened while I was thinking...

Published by Thriftbooks.com User , 16 years ago
The funny thing is the thought itself. Self-delusion is a keystone of human cognition and Cordelia Fine has described our sad state with great humor. Even though I got much of this from my undergraduate psych classes, Fine is such a wit and pulls the material together in such an engaging manner that I just loved reading the book. I disagree with an earlier reviewer's suggestion that Kida's "Don't Believe Everything You Think" is a better book. I appreciated Kida's book a lot and it has a different goal for the reader. But as a writer I enjoyed Fine's delightful wit more. Both writers have something to offer towards a better understanding of human behavior.

Published by Thriftbooks.com User , 16 years ago
This is an excellent book. It brings together a wealth of academic research into the way our brains work and, in particular, how we can't rely on them, and I found this fascinating and in the case of some chapters genuinely helpful and illuminating. What sets the book apart is the fact that this material is presented so clearly and readably - and it's often very funny - but that doesn't mean it's simplistic. The last reviewer said it was suitable for 12 year olds but the fact that it is easy to understand doesn't make it any less insightful. This book was strongly recommended to me by a friend and I'm very glad I have now read it. I in turn recommended it to a friend who is an eminent psychiatrist, and in fact he'd already read it and thought it was very good too. So it works for a top brain-doctor and for a complete layman like me. Exceptional.

If You Can't Trust Your Own Brain

Published by Thriftbooks.com User , 16 years ago
If you can't trust your own brain, who can you trust. We've all seen those drawings that fool your brain into thinking that this line is longer than that line or that these straight lines are curved. Those are just trivial, amateur things compared with the experiments described in this book. In fact, what's really striking to me on this particular day (election day) is how the professional politicians seemed to have studied the brain and how it works very well. (I just got my fourth phone call - 'I am _____ and I really hate receiving those automated phone calls, but I've just got to tell you ....) If she hates these calls so much, I agree, hang up on her machine, and am not going to vote for her. This book is aimed at the interested casual reader. But if you're in advertising, public relations, sales, or (God forbid) politics, I'd consider this book to be mandatory reading. And that's besides it being fun and interesting.

Insights into the way people think & behave in a nutshell!!

Published by Thriftbooks.com User , 16 years ago
An excellent, quality read. A small book, packed with research-based information about why our brains think the way they do! One of those books you pick up and can't put down until you finish the chapter, then the next chapter and the next. The author reports on a multitude of tricks our brains play and explains the research (behind the theories) in a witty and succinct way. The book is also interspersed with some light entertaining comments on life! Highly recommended to any student of brain & behaviour, psychology and the human condition!
Trustpilot
Copyright © 2022 Thriftbooks.com Terms of Use | Privacy Policy | Do Not Sell My Personal Information | Cookie Preferences | Accessibility Statement
ThriftBooks® and the ThriftBooks® logo are registered trademarks of Thrift Books Global, LLC