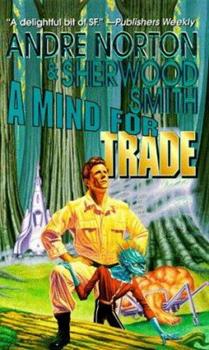 (Book #7 in the Solar Queen Series)

by Andre Norton and Sherwood Smith

The new novel in the popular "Solar Queen" series. Hesprid IV can't be that bad. Especially when it holds such a huge deposit of lucrative cielanite ore. Or so thinks Dane Thorson and the rest of the crew of the "Solar Queen", and its new sister ship, the recently recovered derelict "North Star". The plan seems simple--make landfall, mine ore, leave. Too bad things are never as easy as they appear.

Published by Thriftbooks.com User , 21 years ago
This is a sequel to the novel, "Derelict for Trade." It makes substantial references back to the previous book, and the reader should probably read the books in the order they were written. The story is interesting as the crews of the North Star and Solar Queen attempt to exploit the mineral resources on the planet Hesprid IV. It turns out not to be a milk run as they encounter wretched weather, unexpected XTs, stranded miners, and pirates. The question is whether they can come out of the venture with a profit. The story is well developed and generally well written. The authors have an annoying habit of sometimes switching back and forth between using characters' first names and using their last names - potentially confusing if a reader has not developed a rapport with the characters.

Published by Thriftbooks.com User , 22 years ago
Yes, another Solar Queen adventure. Again Andre Norton has surpassed the average writer's abilities to write a great book. Sherwood Smith was the reason why I bought this book, he needs to get more books out in print, NOW!

After 40 years, but the Solar Queen and crew are still fresh

Published by Thriftbooks.com User , 23 years ago
The Solar Queen and the North Star are checking out the Hesprid IV claim in hopes that they can clear a profit. But several external circumstances seem to be conspiring against them. First there are the unknown ' PSI ' effects being displayed by the apprentices. The planet's extreme fluctuations in EMP, hostile weather, frequent earthquakes, and increasing solar activity, are compounding the dangers of trying to mine any profitable cargo volume. And then there are the other ships 'hiding' within the system who could very well be pirates. The Solar Queen is back!! When I first began to read science fiction as a teen, Andre Norton was a favorite. In later years she expanded to subject and style areas that I did not, but I always maintained my enjoyment of her 'original' works. 'THE BEAST MASTER', 'THE SIOUX SPACEMAN', and all of the 'Solar Queen' series are still on my 'Favorite Books for life' list! Now, in partnership with Sherwood Smith, Norton has returned to the original 50's sci-fi opera style with two new Solar Queen stories. 'DERELICT FOR TRADE' and 'A MIND FOR TRADE' are better than Cool...
Copyright © 2020 Thriftbooks.com Terms of Use | Privacy Policy | Do Not Sell My Personal Information | Accessibility Statement
ThriftBooks® and the ThriftBooks® logo are registered trademarks of Thrift Books Global, LLC