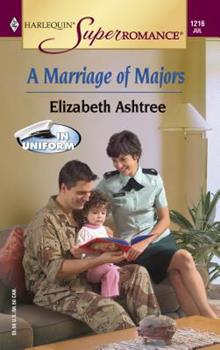 A Marriage of Majors : In Uniform (Harlequin Superromance No. 1216)

(Book #5 in the In Uniform Series)

A Marriage Of Majors by Elizabeth Ashtree released on Jun 24, 2004 is available now for purchase.

"IN UNIFORM" - A BIT OF MILITARY ACTION

Published by Thriftbooks.com User , 14 years ago
Major Kristen Clark-Garitano [wouldn't even split her name?] is meeting her husband for the first time in 18 months with their daughter, Amy, that he hasn't even met yet. Major Anthony Garitano is determined to walk off the transport plane [he just barely makes it] to meet his wife after losing his squad of men in Afghanistan. He still remembers the terrorist speaking in English "I am Taaoun. I will hunt you down and kill you. Your children will die, too. .... Do you hear me Garitano, I will kill you." The Doctors almost convince Tony the Tiger that he is hullicinating. But if he is not, he must protect his wife and child. This is his driving force along with the guilt that he survived the bomb that kill his men. He is not deserving of his wife and still fighting depression so he will bow out of her life . . . get a divorce. Kristen loves her husband very much but can she trust him with their daughter, who seems to have taken to her daddy very easily. Tony has a lot to learn about taking care of an almost 2 year old. Suddenly he gets the prickley impression that Taaoun has shown up. Oh boy, now we start getting into a bit of action. Bioterrorism! she is a nurse. What were they up against? Kristen was talking to Lieutenant Colonel Paul Farley about her problems with her husband. Would he break up their marriage? Captain Dave Batsin. A fellow Ranger -- Tony started talking to "Fang". Then Amy disappears. Taaoun has shown up. The action begins. Most excellent story of emotional trouble - strong love - insecurity - and healing [Tony's dad shows up]. Definitely Recommended - better story than most.

Published by Thriftbooks.com User , 17 years ago
Major Kristen Clark looks forward to the return of her husband Ranger Major Anthony Gariatano who has been in Afghanistan for about eighteen months. Anthony has not even met his daughter Amy born after he left. While capturing enemy combatants, a terrorist Taaouen warns Anthony that he will kill him and his family one day before fleeing into the caves. Not long afterward, an explosion rocks Anthony's unit killing several and severely wounding Anthony. He physically recovers in a hospital but the scars on his face go deeper as he mentally has not recovered from the trauma and expects to divorce Kristen.Kristen realizes that her beloved is not the same man. She offers comfort, but he rejects her and frightens their daughter who looked forward to seeing daddy. As he pushes Kristen towards divorce, fulfilling his prophesy, Anthony realizes that Taaouen's threat was not idle and now he must protect the two females he loves so much that he plans to still give up both of them because they deserve better.Though why the hero was not evacuated to Germany for better care is not fully explained, fans will enjoy this fine military romance. The tale salutes the soldiers and family members for their sacrifices. The exciting story line is filled with angst as a somewhat broken Anthony feels he is no longer suitable for the two females who desperately want him in their lives and behaves accordingly in a Pygmalion Effect way. Fans will appreciate this solid relationship drama with the terrorist serving as either a widowmaker or matchmaker depending on who triumphs.Harriet Klausner
Copyright © 2020 Thriftbooks.com Terms of Use | Privacy Policy | Do Not Sell My Personal Information | Accessibility Statement
ThriftBooks® and the ThriftBooks® logo are registered trademarks of Thrift Books Global, LLC