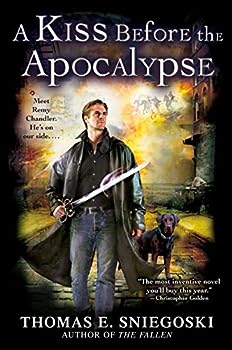 A Kiss Before the Apocalypse (A Remy Chandler Novel)

(Book #1 in the Remy Chandler Series)

This description may be from another edition of this product. Generations ago, angel Remiel chose to renounce heaven and live on Earth. He found a place among ordinary humans by converting himself into Boston P.I. Remy Chandler, but he can never tell anyone who...

A down-to-earth angel who's not to be trifled with

Published by Thriftbooks.com User , 12 years ago
My first encounter with Remiel "Remy" Chandler happened when I read Mean Streets, and I was so delighted to make the acquaintance of this hard-boiled but likable angelic detective that I hunted out the rest of the series. And this series starts off with a bang. While investigating the whereabouts of a client's wayward husband, Remy finds himself dealing with a murder-suicide that's gone wrong in the strangest way. Neither person has died, and it appears that the Angel of Death has gone missing, and thus their souls could not leave their bodies. Nor can the souls of any other dying person be freed, including Remy's eldery, ailing wife. But what starts off as a "simple" disappearance, turns out to be just a small portion of a much bigger catastrophe looming on the horizon... Thomas Sniegoski's unorthodox approach to the celestial realm is liable to throw some readers for an interesting loop, if not put some who have a rigid view of heaven and how it works into a tizzy: this is not your catechism or Sunday school version of heaven and earth, nor are the angels anything like the cuddly-wuddly nicey-nice New Age angels that have become the norm. These angels are closer to the biblical notion of God's warriors than a lot of depictions I've seen (case in point: "Touched by an Angel"), except perhaps in Supernatural: The Complete Fourth Season or Constantine (Two-Disc Deluxe Edition), and it's refreshing to see someone continue this trend. Maybe the story is a little straight-forward and a teeny bit predictable, but the world-building is so unique, and the pacing is so balanced, tense action scenes with good/not-so-good battling evil/not-so-evil, balanced by heart-warming exchanges which give us an insight into Remy's unique outlook, which is a wonderful blend of youthful innocence and adult experience.

A Kiss Before the Apocalypse

Published by Thriftbooks.com User , 13 years ago
I received this book on friday before work and finished it late saturday evening. In short I could not put it down. The intensity of the characters, their internal struggles, relationships and descriptions puts you right there in the action. The setting, takes place in New England, Boston area...if you are from around here, you can easily picture all the scenes and it is fun to read a story that takes place in your own back yard. If you are not from around here... you are in for an amazing description of Boston proper and it's surrounding areas. The careful detail and imagination that went into creating this story and it's characters is genius. I would recommend it to all interested in a "wicked awesome" novel.

Published by Thriftbooks.com User , 13 years ago
He was old before the earth was created. Archangel Remiel of the host of the Seraphim fought when Lucifer and his allies rebelled and though he was on the winning side, he witnessed the atrocities that angels committed. He left Heaven and came to earth. After several millennia as a hermit he hid his angleic personna to live amidst humans and even loved a human. He currently calls himself Remy Chandler, twenty-first century Boston private investigator. His former Heavenly brothers, the Seraphim led by Nathanial visit him. Nathanuel asks on behalf of the Creator for Remiel to find Israfil, the Angel of Death who disappeared a week ago earth time. He has the five seals that would call up the Four Horsemen of the Apocalypse and the fifth seal giving them permission to proceed with their mission. The Seraphim fear Israfil, like Remy, has taken human form, which means no one is collecting the souls of the dead leaving broken and dying but never dead people praying for release. To avoid the Apocalypse and to bring death back into salvation, Remy takes on the assignment, but finds traitors amongst the allies who supposedly aid him. This reviewer prays there will be more novels starring Remy, a being who could return to Heaven any time he wants, but so far chooses to live amongst humans because he relishes the emotions that Heaven does not have. Not everyone will agree with his choice as many people strive on going to Heaven not running from heaven, but the audience will believe he is on earth for a reason as he does great things for humanity. This heartwrenching beautiful urban fantasy will grip readers with its potent emotional fervor. Harriet Klausner
Copyright © 2020 Thriftbooks.com Terms of Use | Privacy Policy | Do Not Sell My Personal Information | Accessibility Statement
ThriftBooks® and the ThriftBooks® logo are registered trademarks of Thrift Books Global, LLC