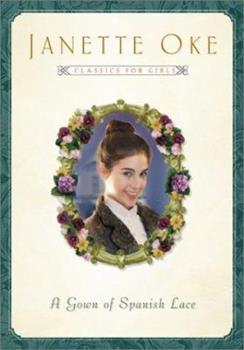 A Gown of Spanish Lace-(Janette Oke Classics for Girls)

(Book #2 in the Janette Oke Classics For Girls Series)

A Janette Oke Classics for Girls book. First-time schoolteacher Ariana is abducted and taken to an outlaw camp far from her home. As her confinement stretches into weeks, Ariana learns little of her... This description may be from another edition of this product.

Published by Thriftbooks.com User , 16 years ago
I really enjoyed this book. My mom read it to me when I was three or four and recently She recomended that I read it myself. I am really happy that I did. It is about a sixteen year old girl named Ariana who is a schoolteacher. one day two men come to the school house and kidnap her during a blizzard. She is taken far away to an old, small, dirty cabin and locked in. When she gets a new guard, Laramie, at first she is afraid of him, but then she starts to enjoy his company. He does not mistreat her and he buys her food and soap and all she needs. one day he decides to help her escape. It is a dangerous and risk, but Laramie is willing to take it and liberate her out of camp. Will they survive? see for yourself. I think that you should definatly buy this book It has many twists that I did not mention. 5 STARS!

Published by Thriftbooks.com User , 18 years ago
This was a great book. I LITERALLY COULD NOT PUT IT DOWN!! Anyway, Ariana Benson is a sweet and beautiful little school teacher. She was adopted by a minister, for her parent's were killed in an indian raid on the wagon train. Meanwhile, Laramie Russel is a handsome young man who doesn't fit in with the gang of desperadoes he lives with. He was also adopted; his parents were killed in an indian raid to. Well, Laramie's father, "the boss," is upset with his son because he has never killed anyone, which is a shame to the life of a desparadoe. See, Laramie is the best gunman, but he doesn't shoot to kill. The Boss decides that a woman is the only way to get Laramie to kill, so he kidnaps Ariana, and orders Laramie to be her prison guard. Well, over time, Laramie discovers a Bible and begins to read it. He realizes how wrong his life in the gang is, and decides to escape, and take Ariana home. Throught the ordeal, the two fall in love, but later on, discover a secret that threatens to tear them apart. Can the ending hold a happiness for them?? READ AND ENJOY!!

Published by Thriftbooks.com User , 19 years ago
This has to be Mrs. Oke's best book ever! I've read many of her books but this one is my personal favorite. The characters are realistic and you can't help but get excited when Ariana and Laramie fall in love. But my favorite part is when Laramie gives his life to the Lord! If you like Mrs. Oke then you definitely need to read Leigh Ann Roberts' books! I just discovered her and am truly thrilled by her new and refreshing story lines!

Published by Thriftbooks.com User , 20 years ago
A Gown of Spanish Lace is the story of Ariana, a sixteen year old schoolteacher. She is abducted from her school right before a storm. She is taken by her captors far from her home. There she loses track of time but never loses her faith in God to take care of her. She is befriended by Sam, one of the outlaws who abducts her. Sam is in charge of guarding the prisoner but then things change. Laramie, son of The Boss, is put in charge of Ariana. This is all part of The Boss's plot and reason for taking her. After Laramie is put in charge of Ariana things take on very interesting turns. People begin to realize they aren't who they thought. I can't say anymore without giving the story away.This book was a wonderful read. It kept me on the edge of my seat. I had to find out what would happen between Ariana and Laramie. I found myself feeling sympathy for not only Ariana for being in the situation she was in but also for Laramie. He was also in a situation he wasn't comfortable or sure about. Janette Oke writes such wonderful books. Her characters are so real one almost believes they really did live in the past. Though her books are set in the prairie times the messages in them will be current for all of time. This book is so well written. Events happen at such a pace the reader doesn't have time to catch their breath or stop for a break. You simply must read ahead to find out what happens. I loved this book and was so sorry it ended. I must say I was beginning to get a little worried toward the end when things weren't looking good for Ariana and Laramie. This is a must read book.

Published by Thriftbooks.com User , 22 years ago
Although Oke wrote a suburb series in Love Comes Softly, her breakout into smaller series and one book stories no doubt was the springboard for this awesome book. It is part of the Women of the West single book stories, and I believe, the best. The storyline was conceived forty years earlier by the author, but for some reason she didn't explain, it never made it to print until 1995. Ariana was an orphan, adopted by loving parents and the one and only link she had to her biological parents was her wedding dress. However, all her hopes of being married in this dress, and teaching plans were changed during her horrible, violent kidnapping by two rowdy men.While she was held hostage in a camp controlled by bandits, her faith and trust were severely tested. She had to hold fast to God and her trust that He would control her destiny even when it seemed the rowdy outlaws were in charge of her life and future.The exciting (and surprising) conclusion to this book makes it among the top of the bunch. I plan to read it again and again. Thank you, Janette Oke, for finally putting this story in print!
Trustpilot
Copyright © 2022 Thriftbooks.com Terms of Use | Privacy Policy | Do Not Sell My Personal Information | Accessibility Statement
ThriftBooks® and the ThriftBooks® logo are registered trademarks of Thrift Books Global, LLC