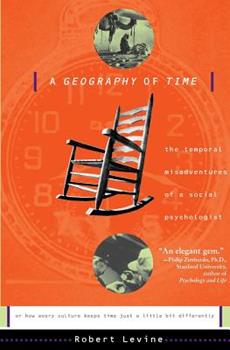 A Geography of Time: The Temporal Misadventures of a Social Psychologist, or How Every Culture Keeps Time Just a Little Bit Differently

In this engaging and spirited book, eminent social psychologist Robert Levine asks us to explore a dimension of our experience that we take for granted--our perception of time. When we travel to a different country, or even a different city in the United States, we assume that a certain amount of cultural adjustment will be required, whether it's getting used to new food or negotiating a foreign language, adapting to a different standard of living...

Published by Thriftbooks.com User , 15 years ago
Levine reports beautifully on his studies of cultural perceptions of time in the modern world. He writes well and engagingly, presenting a very interesting and telling look into human perception of time in different cultures and its effect on mental and physical health, reasoning, and society. A must read.

Time, Place, Pace: New ways to think about our creation.

Published by Thriftbooks.com User , 17 years ago
A Geography of Time, by Robert Levine, discusses time as few may have previously considered it in their daily pursuits. Through personal experience, via a sabbatical, Levine offers keen insights into the rhythms of life as experienced by peoples and places the world over. Offering "tempo" and what he calls "clock time" and "event time," as points of departure in an analysis of his and his colleagues observations, Levine successfully illustrates how not only "personality types" impact a region, but also how the region impacts the personality as well, thus revealing the symbiotic relationship between the person or persons and place or places respectively. By traversing not only the globe, but the subject of time as well, Levine has allowed readers to come closer to understanding their world and those of others with whom they come in contact. Of his main points, Levine successfully argues that we are oriented to clock-time, event-time, or "multitemporality," i.e., psychological androgyny. [Of this in between time and state of mind, Levine shows that we are better served in such a space than that of being exclusively in one or the other of either clock or event time; especially as it relates to our social, physical and psychological well being.] Two chapters considered interesting by this reviewer are chapters one and ten. Due to the foundation established in chapter one regarding "tempo," and the last wherein Levine offers practical solutions to balance our activities and potentially lead healthier and happier lives, A Geography of Time, is not only a delightful read, it is also enormously illuminating. By providing an approachable perspective for consideration, as it relates to human activity and interaction, i.e., tempo, coupled with personal and collegial anecdotes, Levine has broached the subject of the relativity of time and pace with considerable depth and admirable precision. In chapter one, "Tempo: The Speed of Life," Levine shows how humans, despite best efforts of social constructionists, still "march to the beat of different drummers." Borrowing from the field of music, the element of tempo, Levine notices, along with colleagues who have both traveled and lived in other countries, that not only do people have different rhythms in locales the world over, but that there seem to be distinguishable characteristics of and between the places as well. In asking the question, "what characteristics of places and cultures make them faster or slower?" Levine posits two elements for consideration: "economic well-being" and "degree of industrialization." With these elements in mind, Levine, in later chapters, develops some rather interesting and amusing ways to determine not only people's level of helpfulness in a specific locale, but also the pace of locales observed. In chapter ten, "Minding your time, Timing your Mind," Levine successfully answers the "so what?" question. By illustrating that there are significant and avoidable cons

Published by Thriftbooks.com User , 19 years ago
"A Geography of Time" is an almost-excellent study of perception of time, and how this perception is affected by culture and location. A new vocabulary is introduced to the reader, along with a host of new ideas about time, including "event time," "natural time," and the familiar "clock time." The author's research is enlightening and challenging.The concepts are easy to absorb, and the subject is well-researched and documented. I have no doubt that Levine's work is strong. Some of the work involves providing evidence for well-known concepts, such as bigger cities have a faster pace than smaller cities. Interesting correlations are drawn between the pace of a location and the accuracy of it's timepieces. I found the concept of being able to train oneself to elongate and condense time perception to be particularly interesting, such as in the case of a martial artist who moves fast by forcing an opponent to appear to move slow. Other interesting tidbits include the "contradiction of Japan," which shows that an ultra-fast paced life can be balanced out with cultural rules to prevent aggression, and how a slow-paced city is not necessarily kinder than a fast-paced city.The reason why "A Geography of Time" is only almost-excellent is due to the author's skills as a writer. Ideas are not presented in a structured manner, information is redundantly repeated and personal opinions are freely mixed with research and evidence. Some difficult concepts, such as Einstein's time dilatation in Special Relativity are introduced as window dressing for what amounts to a sociological subject. A brief history of the introduction of clocks in America is included. The last chapter is almost a "self help" opinion piece by the author, on how to use knowledge of time to greatest advantage.All in all, while the research is interesting and the concepts are worth reading, the book would have benefited from a tighter focus on the author's part. The book wander's lazily from concept to concept, and hurts the material overall. All in all, worth reading and enjoyable, but falling just short of the mark.

A winning combo of research/experience/insight

Published by Thriftbooks.com User , 22 years ago
I've been aware of Levine's work on "time" for more than a decade from articles and such, and I was thrilled to see this book. It's the best of its ilk: good qualitative research, heavily based on personal experience, written anecdotally and fascinatingly. I see this as akin to Deborah Tannen's excellent work in "You Just Don't Understand." If only more people were aware of how relative our cultural assumptions are, it might prevent some hair-tearing as we travel and also prevent some frustration here at home when we come upon others (even our own spouses....) who have another way of thinking/feeling about time.

Published by Thriftbooks.com User , 23 years ago
Loved every word, and maybe that's because my thoughts and experiences on the subject of "time" have been very similar to the author's. Levine chose his profession based on temporal wealth (same as me - and a friend - when we decided as travel agents that two weeks of vacation a year was not adequate and we needed jobs that paid a living wage while allowing for much more time off - voila - we both became teachers!), and he was blown away by the Brazilian concept of time while he was teaching down there in 1976 (one year before my own, very similar, experience there). Then, he quotes E.P. Thompson's, Time, work-discipline, and industrial capitalism (Past and Present, 38, 56-97) which I have been quoting ever since I read it in 1992 at UMass. I wish I would have written this book!
Trustpilot
Copyright © 2022 Thriftbooks.com Terms of Use | Privacy Policy | Do Not Sell or Share My Personal Information | Accessibility Statement
ThriftBooks® and the ThriftBooks® logo are registered trademarks of Thrift Books Global, LLC