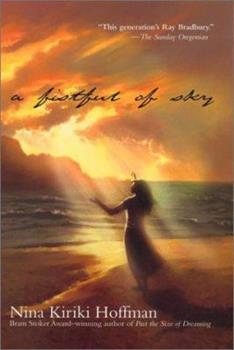 A Fistful of Sky (A LaZelle Family Novel)

(Book #1 in the LaZelle Series)

Gypsum LaZelle is a misfit in a family of spellcasters-she possesses no magical ability whatsoever. Until the day when she becomes gravely ill, and discovers that her Transition has occurred at last, bestowing upon her a strange and frightening power.

You don't always get what you want

Published by Thriftbooks.com User , 15 years ago
And sometimes, when you do, it turns out you may not want it after all. At least that's what Gypsum LaZelle discovers when, after having convinced herself she'd never receive her magical powers like the rest of her family did, she actually does receive them, only they're not exactly what she expected. This is the story of Gypsum LaZelle, the "black sheep" of her magical family. Unlike the rest of the LaZelle's, Gypsum didn't go through her transition to receive her powers. She's accepted her fate as a non-magical member of her family and of society, even if it means that she won't quite measure up to the rest of her siblings, especially in her very magical mother's eyes. It isn't until she becomes sick, and something suddenly changes in her, that Gypsum realizes she may not be all that different. But then again...maybe she is. This is a wonderful coming of age story about a young girl struggling with her identity. Take away the magic portion of the story, and it would still be a great story about finding your place, fitting in, being comfortable with who you trully are, whether or not it is who you always expected to be. Throw the magic element back into it, and it is a colorful, vivid, creative and imaginative tale. Hoffman does a wonderful job creating characters that are both realistic and full of fantasy. They are people the reader can identify with, and yet be mesmerized by. I thoroughly enjoyed this book, and am looking forward to reading more by the author.

Couldn't Put it Down!

Published by Thriftbooks.com User , 16 years ago
This is one of the most imaginative books I have come across in a long time, and I had trouble putting it down! It's one of those gems that engross you, and you will think of it long after you've finished it. Gypsum LaZelle, the middle child in a family of talented witches, has resigned herself to being normal. Having not undergone transition, she never acquired the powers that her siblings and mother have. So she was surprised, to say the least, when at twenty years old, she underwent her own transition and gained her own power. Her surprise was greater still when, instead of having a positive power like the rest of her family, she had a negative power-the power of curses. Waking up each morning with power literally spilling out of her, Gypsum HAD to utilize her curses, but more often than not, things went awry. With a perfectionist mother, every failure was blown out of proportion and criticized. Luckily, with the love and support of the rest of her family, Gyp starts to learn how she can use her power for good rather than evil. Sometimes dangerous, sometimes funny, and always entertaining, Gyp's magical attempts will fascinate the reader. What's great about the main character is that she's not perfect: overweight, naive and a bit squeamish, she is a wholly lovable, believable character. Hoffman did a marvelous job crafting Gyp's emotions, and the characters are extremely endearing. If this is any indication of the writer's talents, I'm going to go out and buy all her works.

One of the best books I've read in ages.

Published by Thriftbooks.com User , 17 years ago
"A Fistful of Sky" is wonderful on so many different levels. The first, most immediate, one is the "good story" level. This book is a great read, fun, compelling, magical, and dark by turns. The plot is just irresistable -- the magicless "ugly duckling" of a family of magicians suddenly develops the power of curses -- and the main character is very likable and personable. The various twists and turns of the plot will keep you engaged with the story, compulsivly turning pages. It's both a fun read and a good, thought-provoking read. Another level I can appreciate this book on is the "good writing" level. Hoffman writes beautiful, pellucid prose that is simultaneously simple, easy-to-read, and relatively transparent, and also gorgeous, poetical, and resonant with meaning. This is good stuff, here. And then there's Gypsum's coming-of-age story. Any woman out there who has ever struggled with a weight problem will be able to identify with Gypsum. There's a scene that takes place in Gypsum's adolescence where her mother casts a well-intentioned but horribly inappropriate spell on her to make her lose weight that will have all of us fat girl readers wincing in recognition and sympathetic pain. More than that, the idea of Gypsum, a full-figured woman, being afraid to use her own power just resonated strongly with me. Ultimately, this book is about coming to terms with yourself and accepting yourself, learning to love the dark parts of your soul as well as the light parts -- embracing yourself in all your good, bad, light, dark, and contradictory human glory. I know I, for one, really needed to read it. I'm very glad I did.

Published by Thriftbooks.com User , 18 years ago
In the LaZelle family, the transition into magic is more difficult the older you are. Twenty-year-old Gypsum LaZelle has already resigned herself to living a normal, ungifted life, unlike her four siblings, who transitioned as teenagers. But when Gypsum falls ill one weekend and finally transitions, her power turns out to be a dark power, the power to curse people and things. This book explores the creative ways Gypsum chooses to use her power among her close-knit family, with help from a mysterious girl named Altria. At times moving or funny, A Fistful of Sky is a coming-of-age story about the bonds of human relationships with complex characters, pain, joy, and, of course, magic.

Published by Thriftbooks.com User , 19 years ago
The LaZelles are rich, own a beach front estate in California, and are witches and warlocks except for the patriarch who is not descended from a line of mages. The children come into their powers after they reach adolescence, all that is except for Gypsum who at the age of nineteen shows no evidence that she will wield magic. She accepts the fact that she is the odd sibling and just when she thinks her life will be normal she "transitions' into a witch."Gyp's powers are not like her brothers and sisters. Her specialty is curses and she must curse someone or something several times a day or she will get sick. Some of her curses turn out to be funny, some are very scary, but none are ever dull. The longer Gyp practices, the more she refines her gift and something very surprising occurs that shocks not only her but her entire family.A FISTFUL OF SKY is a very beguiling and magical coming of age tale. The heroine goes through some very funny experiences as she comes to grips with her new found powers that will bewitch readers by her looking like a teenage version of Samantha's befuddled aunt. Nina Kiriki Hoffman has a flair for the dramatic and the unusual.Harriet Klausner
Copyright © 2020 Thriftbooks.com Terms of Use | Privacy Policy | Do Not Sell My Personal Information | Accessibility Statement
ThriftBooks® and the ThriftBooks® logo are registered trademarks of Thrift Books Global, LLC