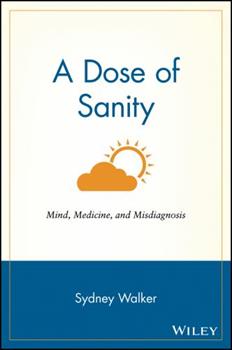 A Dose of Sanity: Mind, Medicine, and Misdiagnosis

"Bravo to Dr. Sydney Walker. He has written a masterful book for current and prospective mental health consumers. Before filling a prescription for Prozac or Ritalin, make sure you get A Dose of Sanity."--Charles B. Inlander President, People's Medical Society Has your child been labeled hyperactive? Has your parent been diagnosed with senile dementia? Did your doctor prescribe Prozac for your so-called depression? If you answered "yes" to any of...

This book should be required reading by psychiatrists

Published by Thriftbooks.com User , 20 years ago
This book should be required reading by all psychiatrists. There is still so much to learn from this maverick psychiatrist. Dr.Sydney Walker 111 was an unforgettable and unique and towering giant,we will not find another Dr.Sydney Walker again!! The closest thing to another Dr.Walker in Canada might be the ill-fated Dr.Ed Pakes,a brilliant pioneer bereavement psychiatrist. There is also Dr.Robin Brooks-Hill. Then there is an aloof South African "Shrink",and his son,who wrote some book called "Freud". (Obviously that isn't really the correct title,but it is a free country) Besides,why see Dr.Aloof Shrink when you can watch Meryl Streep films on Video. Bouchard is no longer a power,Richler is dead,Where is Trudeau or Lon Chaney Jr when we need him?

Informative, but left me wanting more

Published by Thriftbooks.com User , 21 years ago
I was very impressed with A Dose of Sanity because so many books critical of psychiatry remind me of Breggin which claim that there is something "spiritual" missing in the patient, and the author ignores the bioligical problems inherent in the behavioral or mood disorder. However, I as I made my way through the book I was concerned that Dr. Walker was not going to address what to do if you have been diagnosed with a serious mood disorder, but were unable to find a physical cause (like a boy that was ADHD but had cardiac problems). I was right. He never said what to do if you have been diagnosed with manic depression (or any of the other hard to treat mood disorders). He did not address lithium or other non-antidepressant therapies for mood disorders. I agree that these treatments are probably only treating the symptoms of some underlying brain dysfunction that science has not yet named, but what does the patient do until science has figured this out? Remain psychotic? Lithium therapy may be some band-aid solution for a cellular dysfunction of our brain matter, but is a patient supposed to discontinue this medication because science can only offer this treatment to help the symptoms of the disorder? I wish Walker had offered an opinion and information on this issue. Also, along the same line, he didn't say what patients should do once they had gone through exstensive medical testing to determine their problem and nothing physically wrong was found. (Nevermind the fact that he did't give specific tests to ask for - just blood and urinalysis in addition to what else?) If you know that you don't suffer from pin worms, syphillis, typhus, cardiac problems or whatever else, but your symptoms only seem to match typical manic symptoms that only lithium helps, should you throw in the towel and accept the psychotropic medication?I do think that Dr. Walker is truly concerned about patients who have fallen victim to DSM "diagnosis", and this book could be very helpful for a patient who has received psychiatric care, but did not have a full medical work-up before taking psychotropic medications. I only wish this book had touched on the issues that I mentioned above.Finally, the most important message of this book is never stop learning about what you have been told your disorder is, and never take the word of your doctor as law. As Walker says himself, there is no way that one doctor can know everthing about medicine.

Much more sensible than most books critical of the field.

Published by Thriftbooks.com User , 23 years ago
This is not the first book I've read that is critical of psychiatry. But compared to Caplan, Breggin, and Szasz, this is the most sensible critique I've seen. Usually, in the anti-psychiatry literature one finds inexcusible nonsequiturs. For example: "Psychiatrists often don't realize that the medication is causing the disorder (good point). Therefore, biological psychatry is unsound (bad point)." Or "Psychiatric illnesses are voted on by committee (good point), therefore there is no such thing as mental illness (bad point)." Walker avoids making such obvious nonsequiturs. Far from being against biological psychiatry, Walker argues that current psychiatry is not biological enough. It appeals to highly hypothetical conditions (such as neurotransmitter disorders) while ignoring known conditions (such as pin worms or hypothyroidism). Some might think that this is all that Walker is saying, but his general point seems to be that since psychiatrists are taught to run through symptoms lists instead of being medical detectives, there a lot of unknown conditions which they are failing to discover.

Published by Thriftbooks.com User , 24 years ago
Dr. Walker's book is a stern indictment of the contemporary medical profession and the mental health field in particular. He charges the majority of psychiatrists of ignoring the true needs of their patients and instead practicing and arbitrary pseudo-science of labeling. They seem to have given up on the idea (fundamental to the philosophy of science)that all events have a cause and that to understand something we must understand the process of cause and effect that brought it into being. Most modern psychiatrists are not interested in finding out what is wrong through careful methodology. They are divided into two camps. The psychoanalytic types deny a medical cause for abnormal feelings and behaviour altogether (however, they still want the prestige that comes with being a medical doctor!). They look everything from a bad childhood to alien abductions to explain such things as psychosis and manic depression, even though no scientific study has ever proven the theories on which their claims are based. The next group, the standard issue biopsychiatrists are a little more up to date. They would admit the obvious scientific truth that someone who hears voices or is immobilized by a deep depression is psysically ill. However, they drop the ball as well. Most biologically based psychiatrists give very vague answers about the causes of mental illness, and rely on a few biological treatments which are tried on the patient almost randomly until one seems to "work". For instance, a depressed person will be given one antidepressant drug after another without the doctor even stopping to consider that the deprssion may result from anemia, a thyroid imbalance, poor nutrition or a host of other causes. Many psyciatric patients today are not even given a blood test, an EEG or any other genuine medical test before traetment is prescribed. Walker points out that until people are given a battery of tests, we will never really know what is wrong with them. Prozac or tranquilizers may make the! m feel better temporatily, but they could be literally dying. He also attacks the concepts of hypochodndria and facetious disorder. For the most part, he argues, these are destructive labels used to protect doctors and stigmatized patients ("if I can't figure out what is wrong with you then it is all in you're head and/or you are just making it up") While I don't agree with all his points (for instance, his extreme anti-prozac position) I must say that this book is must reading for anyone in need of mental health care.
Trustpilot
Copyright © 2022 Thriftbooks.com Terms of Use | Privacy Policy | Do Not Sell My Personal Information | Cookie Preferences | Accessibility Statement
ThriftBooks® and the ThriftBooks® logo are registered trademarks of Thrift Books Global, LLC