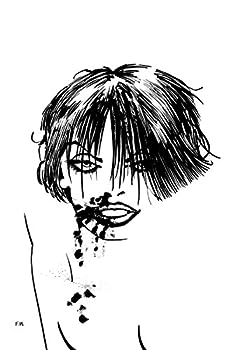 Sin City Volume 2: A Dame to Kill For (3rd Edition)

This description may be from another edition of this product. The second volume of Frank Miller's signature series is now planned as the lead story in the upcoming Sin City 2! This newly redesigned edition sports a new cover by Miller - some of his first comics...

Love and death and grey all over...

Published by Thriftbooks.com User , 16 years ago
Sin City may be black ink on white paper, but it's nothing without the grey. The characters in this book are grey--all over. A Dame to Kill For is the story of Dwight. Dwight is a good guy with 2 bad habits--booze & broads. But he's sober now. He's taking great pictures of husbands doing nasty things to women who aren't their wives in order to make a living as a private-eye. Dwight is damaged, but on the mend--until Ava shows up. Then it all gets messy. Really messy. This is the 2nd tale of Sin City and about mid-way through the story Marv, the star of the first book, makes a guest appearance. This book stands completely on its own from book 1 (The Hard Goodbye). However, Marv's story in The Hard Goodbye begins to intertwine with Dwight's and Miller throws in a few cameos for those who read The Hard Goodbye. This is probably my favorite Sin City yarn. I love them all, but in my opinion creator Frank Miller found his stride in book 1 then ran with it in spades with this book. And for those folks delving into the world of Sin City because of the 2005 film, this book will be a special treat cuz it's the prequel to Dwight's story in The Big Fat Kill, in which Clive Owen, Michael Clarke Duncan & Rosario Dawson starred in the 2005 film. Do yourself a favor and throw down the cash for this book now. Trust me, $12 is peanuts for the all entertainment packed in these pages.

just like that everything goes right straight to hell

Published by Thriftbooks.com User , 16 years ago
Worth dying for, worth killing for, worth going to hell for...amen. After all that in book 1, I didn't know what to expect from book 2, and it bugged me. Now that I've read it I must say I was pleasantly surprised, and have even more confidence in Miller's series. He managed another great tale from this dark world of Sin City. It would seem Dwight-the main character can't get anything right without going straight to hell first. I thought it was excellent and I was glad when he finally did get it right. I enjoyed book 2 as much as or even more than book 1. In case anyone's wondering..The paperback editions are durable and large enough. Even with sensitive eyes or an eye condition, it's an easy read that shouldn't cause any strain or discomfort. Very cool books. I'm looking forward to #3 and 4.

Black and white at its best

Published by Thriftbooks.com User , 16 years ago
Let me say that again: not just monochrome, but black and white. None of the shades halfway between. That defines the whole tone of the story - everything and everyone is at its extreme. Dwight is a man driven by his extremes, either quiet and peaceful enough or, as he says, the monster is loose. Mort the cop, has his extremes, from family man and cop to cop killer. Ava is a woman of extremes, Miho is a woman of just one extreme, and so on for all the rest. It's a dirty story, about the dirty sides of people in a dirty city. I don't mean that it's smutty, although readers offended by nudity should pick another title. It's just about people at their very worst, where there's no good way out, except that some of the very worst may be taken down like a mad dog. It's great. //wiredweird

It's another hot night...

Published by Thriftbooks.com User , 16 years ago
This is Frank Miller's second Sin City story. While it doesn't quite match The Hard Goodbye, it's a damn fine example of comics noir in it's own right. The lead character this time around is Dwight, but fans of Marv will be pleased to know that he shows up here in a supporting role. This story takes place prior to, and concurrently with, "The Hard Goodbye". In fact, you can see Marv enacting some scenes from "The Hard Goodbye" in the background of panels here. Anyway, the story is about how Dwight's ex-girlfriend Ava comes and asks him for help. I don't want to give away the story, but it may seem a bit familiar to fans of film noir. Despite what may seem like a predictable storyline, I loved it because it is so well told and the art is beautiful. This is not one of the stories that is being adapted for the Sin City motion picture, but the sequel to this book, The Big Fat Kill is in the movie.

Embrace the Dark Side!

Published by Thriftbooks.com User , 19 years ago
Equally as good as the original, this follow-up centers on the character named Dwight. He's fallen for a certain woman's lies, and has had enough. The story centers on his trying to exact revenge on her, and he recruits our hero Marv from the original Sin City in the process. Interesting, if you know the outcome of the first story. My favorite device used here was the showing of the same bar scene from Sin City. I am a huge fan of cross-referencing stories, and I've never seen this used so well in a graphic novel before. So, like I've said before, any doubts? Get some. Pick up some more Sin City today.
Copyright © 2020 Thriftbooks.com Terms of Use | Privacy Policy | Do Not Sell My Personal Information | Accessibility Statement
ThriftBooks® and the ThriftBooks® logo are registered trademarks of Thrift Books Global, LLC