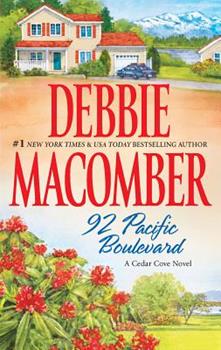 (Book #9 in the Cedar Cove Series)

92 Pacific Boulevard Cedar Cove, Washington Dear Reader, I'm not much of a letter writer. As the sheriff here, I'm used to writing incident reports, not chatty letters. But my daughter, Megan--who'll be making me a grandfather soon--told me I had to do this. So here goes. I'll tell you straight out that I'd hoped to marry Faith Beckwith (my onetime high school girlfriend) but she ended the relationship last month, even though we're both widowed and...

Visit with some old friends.

Published by Thriftbooks.com User , 12 years ago
I love to read Debbie Macomber's books because I always come away feeling a bit more positive about life and people in general. This book is her latest in the Cedar Cove series. The fictional town of Cedar Cove is based on her own town and at the end of August they hosted Cedar Cove Days and from what I've read it sounds like it was a big success (I did not attend the event). This series started 9 years ago and she releases a new installment at the end of the summer each year. The number at the beginning of the address tells what book it is (for example 16 Lighthouse Road was first and 92 Pacific Boulevard is ninth). Each address belongs to one character or couple and the main story or mystery will revolve around him, her or them while all the other characters continue to make an appearance and continue forward with their lives. From when the series started a few characters have moved or passed away but most of them are the same although their lives may have changed. This installment deals with Sheriff Troy Davis and Faith Beckwith who was his first love but due to circumstances they ended up happily married to other people. Both are now widowed. A misunderstanding took place in the last book and they are still working through the fall-out plus Troy is trying to solve the case of the 25 year old skeleton found in a cave by two teenagers as well as looking for the person responsible for vandalizing Faith's rental home. Olivia is still fighting cancer and Ben continues to have problems and to be disappointed by his grown son David. These characters feel like friends. It is a testament to Macomber that they feel like real people, the whole town feels real. There are times when I feel like authors allow their series to go on too long, but that is not the case here. The only issue I have is that since it's been awhile since I read the last books I sometimes forget details. That being said, Macomber does drop hints and have people reminisce about things to catch the reader up on what has changed. This is a great book to curl up and relax with. I didn't want it to end and look forward to late August next year for the next installment. On a side note, a cookbook was also released in hardcover which I am currently reading (look for a review in the next few days). The cookbook uses the characters from the series. [...]

Published by Thriftbooks.com User , 12 years ago
As with all the Cedar Cove books, I feel like the characters are my extended family, and I can't wait to see how their situations play out. Each new character that is introduced is like a newly found cousin or inlaw. I don't want the series to end.

Published by Thriftbooks.com User , 12 years ago
This book is terrific, of course all of the books in this series have been great. She is one of my favorite authors.

Published by Thriftbooks.com User , 12 years ago
I have read each book in Debbie Macomber's Cedar Cove series and am always eager to read each new installment. This newest book centers around the characters of Troy Davis the sheriff and resident of "92 Pacific Boulevard" and Faith Beckwith. As with the previous books in the series, this book also builds on storylines related to other favorite characters from prior books, including Olivia, Rachel, Mary Jo, Teri, Christie, and many others. Some characters that had a small part in prior books, such as Mary Jo's brother Linc, get their own story as well. The book has a good mixture of storylines that are resolved and "cliffhangers" to build suspense for the next installment. I recommend this book to fans of the Cedar Cove series. If you are new to the series, I think the book could be enjoyed as a stand-alone, but would be more enjoyable if you had the background on the ongoing characters from earlier books. I love this series and am already looking forward to the newest book next year!

Published by Thriftbooks.com User , 12 years ago
Just received 92 Pacific Boulevard today....can't put it down....love, love, love the people in Cedar Cove. I've read every book in the series and look forward to the next....highly recommend this really great read !!
Copyright © 2020 Thriftbooks.com Terms of Use | Privacy Policy | Do Not Sell My Personal Information | Accessibility Statement
ThriftBooks® and the ThriftBooks® logo are registered trademarks of Thrift Books Global, LLC