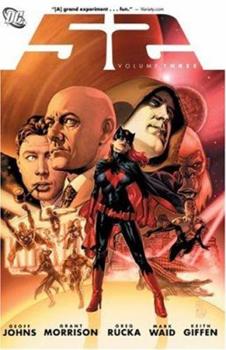 Published by Thriftbooks.com User , 11 years ago
I haven't even begin Volume 4, but I gotta tell you, this volume is quite amazing. So many great things happening... revelations, massive loss of lifes, the shape of a tragedy to come. I feel chills just to think on what will happen next. Can't wait, and you should either. Get this now and you'll have a better understanding on Final Crisis.

review for all four volumes

Published by Thriftbooks.com User , 13 years ago
DC's 52 was highly ambitious, which made me more than a little nervous, since projects as big as these usually fall flat. With the big three missing, Superman, Batman, and Wonder Woman, DC picks up some acilliary characters and kind of turns them into the modern age superheroes. Really DC is trying to kick start some other books. But they do a good job, especially since there is a book a week. Bravo gentlemen.

The Best Volume of the Series

Published by Thriftbooks.com User , 14 years ago
This is probably my favorite of all three of the volumes. All of the stories really come to ahead and prepare for the final push. The Supernova story is probably the best story in the book as you finally find out who he is. The Black Adam story hasn't quite got to the climax but, it is close. The story of Dr.Magnus continues to get better. The Question and Montoya storyline really sends you down a sad path but, a very well written story and the art while nothing amazing is good enough.

Published by Thriftbooks.com User , 14 years ago
This is the best volume so far in the series, and I was highly impressed by the tight plotting and narrative flow. The artwork is a little busy at times, but overall is excellent. I still think the series would have benefited from not having the Starfire, Adam Strange, Animal Man plot line, but as that arc is barely touched upon here, the whole series prospered. Highly recommended.

The best of the series so far

Published by Thriftbooks.com User , 14 years ago
52, DC's innovative real time weekly comic series that fills in the events between Infinite Crisis and One Year Later, continues to go strong in this TPB, which collects weeks 27-39. In this collection, Black Adam and his Black Marvel family attempt to convice the world he's a changed man, while his new brother Osiris attempts to join the Teen Titans. The JSA disbands in the wake of Lex Luthor's young super heroes, and soon enough his true intentions are revealed. Also revealed in this collection, the identity of the masked Supernova, and it's quite a well done shocker. In the meantime, Ralph "Elongated Man" Dibny goes on a journey with the helmet of Doctor Fate, Renee Montoya learns a hidden secret from The Question, and Adam Strange, Starfire, and Animal Man learn of Lobo's true intentions. The final pages appear that things are about to come to a head, which all together make this the best collection of the series so far. With the writing tandem of Geoff Johns, Grant Morrison, Greg Rucka, and Mark Waid; would you really expect anything less? Each writer shines through in specific moments in each issue, and fans of Morrison's Animal Man run will love the delicious cliffhanger twist as Buddy Baker finds himself left behind. We also once again have a variety of pencilers and inkers as well; featuring Keith Giffen doing breakdowns, as well as Phil Jimenez, Dan Jurgens, Joe Bennett, Keith Champagne, Rodney Ramos, and Prentis Rollins. All in all, the third collected volume of 52 is where the series really hits it's stride, and with one more volume to go, the best is yet to come.
Copyright © 2020 Thriftbooks.com Terms of Use | Privacy Policy | Do Not Sell My Personal Information | Accessibility Statement
ThriftBooks® and the ThriftBooks® logo are registered trademarks of Thrift Books Global, LLC