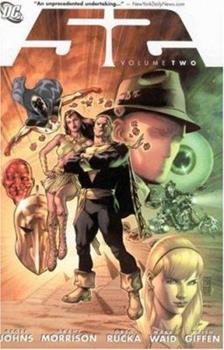 Second in the series

Published by Thriftbooks.com User , 11 years ago
The second entry in the 52 series finds a few storylines getting convoluted (Booster Gold's, for one) and a few others (Renee Montoya's) getting stale. However, the storyline involving Black Adam and his new family is terrific.

review for all four volumes

Published by Thriftbooks.com User , 13 years ago
DC's 52 was highly ambitious, which made me more than a little nervous, since projects as big as these usually fall flat. With the big three missing, Superman, Batman, and Wonder Woman, DC picks up some acilliary characters and kind of turns them into the modern age superheroes. Really DC is trying to kick start some other books. But they do a good job, especially since there is a book a week. Bravo gentlemen.

Not as Good as Volume One

Published by Thriftbooks.com User , 14 years ago
In my review of volume one I wrote that I was hooked. And now? Not quite as much. Some of the storylines have increased my interest particularly the Doc Magnus/T.O. Morrow/Oolong Island thread but most (I'm looking at you Question/Montoya) have grown rather stale. My favorite from the first volume was the Booster Gold story and that one takes a MAJOR swerve but it gets kind of short shrift here. My least favorite storyline was anything to do with Kahndaq and that one is the centerpiece of volume two even getting prominence on the cover. This was my experience throughout the book. Wishing the story would get off of ponderous ones like the Steel/Luthor story and onto the more interesting ones like Ralph Dibney (who is now collection powerful magic items including Fate's helmet). One of my favorite features of the 52 collection is the author/artists notes at the end of each issue. They give the reader a glimpse into the mind of the creators including revealing information like the chronological error in the Kahndaq storyline where Intergang began plotting to disrupt Black Adam/Isis's wedding even before he proposed to her. Speaking of Intergang, that is one of the storylines that is really picking up steam and seems to be the thread that may bind together the entire series. Intergang has already touched on at least three storylines and in volume two we get to peer into the inner workings of their top echelon include the introduction of a truly creepy Chang Tzu (Egg Fu). Hopefully volume two was just an aberration. It wasn't bad it just was a letdown after the first volume. I had hoped that as the storylines progressed the intrigue would increase but instead... Oh well, I'll still be ordering volume three the week it comes out.

Published by Thriftbooks.com User , 14 years ago
52 made history as the first comic ever to cover one week at time, while published on a weekly schedule, for a full year. Written by a dream team of top writers (Johns, Morrison, Rucka, and Waid) with layouts by Keith Giffen, the book definitely had the talent assigned to be a success. This volume is the second of four (the latter two will both be out by the end of this year) and covers issues 14-26. The storylines all continue from 52, Vol. 1 and you should certainly read that first as this is not a series that should be picked up in the middle! The story follows Black Adam as he marries and builds a family for himself somewhat similar to the Marvel Family. The Question and Renee Montoya follow a quest that makes them Adam's temporary allies. Doc Magnus is kidnapped and learns what happened to all the scientists that have gone missing in recent months. Adam Strange, Starfire, and Animal Man meet the main man himself. Lobo, as they try to find their way back to Earth, and... well, if you're getting the idea that there are a lot of little stories woven together in 52 then you just might be on to something. 52 is a project that was extremely ambitious both in scope and scale. Gathering four top writers could have been a disaster but in this case it seems as if we get the very best out of all of them. Grant Morrison has always been known for his big ideas but left on his own he tends to lose focus and not know which ideas to use and which to lose. But the other writers seem to have picked up on his best concepts and left the rest. Each writer seems to have his best aspect represented in 52 and Keith Giffen was at the top of his game providing layouts and ensuring that the story would be told exceptionally well with the art. There are aspects of 52 that some fans objected to, but overall it earned a great amount of respect and is a great read. Buy all four volumes and enjoy the ride.

Published by Thriftbooks.com User , 14 years ago
DC's innovative, weekly mini-series 52 reaches it's halfway point with this second TPB, which finds the cadre of characters the series focuses on in some dire situations indeed. Black Adam is happy for the first time in, well, maybe ever; and is looking to marry his newly beloved Isis and expand his Black Marvel family while the Question and Renee Montoya stop in Khandaq to make unlikely allies for him. Meanwhile, Booster Gold sulks as his hero days are apparently over; Starfire, Adam Strange, and Animal Man continue their interstellar adventures with Lobo playing a vital role; Steel mourns the departure of his neice, and the identity of the mysterious Supernova is hinted and teased with as the seeds of future, devestating events are planted even more so. While 52 is supposed to bridge the gap for the rest of the DC universe being fast forwarded one year after the cataclysmic events of Infinite Crisis, there feels like there is so much going on that it is easy to get lost in the action. Despite that though, 52 stil manages to be plenty compelling, and there are plenty of great surprises throughout to boot. Geoff Johns, Grant Morrison, Greg Rucka, and Mark Waid are a formidable team indeed; and there's another solid list of art talent including Keith Giffen, Phil Jimenez, Ken Lashley, and more. All in all, 52 remains one of the most compelling and innovative mainstream comics you'll read right now.
Copyright © 2020 Thriftbooks.com Terms of Use | Privacy Policy | Do Not Sell My Personal Information | Accessibility Statement
ThriftBooks® and the ThriftBooks® logo are registered trademarks of Thrift Books Global, LLC