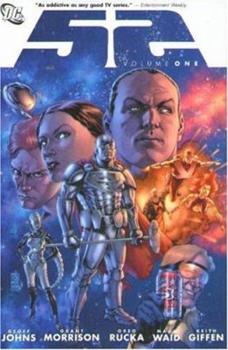 Written by Geoff Johns, Grant Morrison, Greg Rucka, Mark Waid Breakdowns by Keith Giffen Art by various Backup features by Waid and various Covers by J.G. Jones The end is near! As the year races towards its close, we follow our heroes through their final steps in space - and time! From the mean streets of Gotham to the far reaches of deep space, the last weeks tick down to their shattering conclusion. World War III is just the beginning! Plus, more...

Published by Thriftbooks.com User , 13 years ago
This volume collects issues from the "52" series--a year in the life of DC comics told in real time. There are multiple storylines woven throughout, my favorite being the quest of Ralph Dibny (the elongated man) to reunite with his beloved wife, Sue. The events here take place between Infinite Crisis and Final Crisis. At this point, I will read anything Geoff Johns writes; he, along with Morrison, Rucka and Ward craft a terrific series.

Published by Thriftbooks.com User , 15 years ago
'52' is a DC Comics series that printed one comic book a week between Mays 2006 and 2007. This volume collects issues #1 -#13 and is the first of an anticipated four books. Four writers and dozens of artists (led by Keith Giffen's layouts) interwove over ten distinct yet simultaneous plotlines into this massive series. Individual '52' comic books also featured a two page 'Origin' backstory that while not contained herein are readily available on DC Comics' website. These should help readers (like me) that are unfamiliar with the current DC Universe. Along with notes from the creators, the end of each chapter offers an unfinished script or page layout accompanied by a 'compare this to finished Page XX' note. At nearly 300 pages this book seems ideal for a long plane or train ride. The heft also allows the reader to flip back to previous issues, definitely an asset with a plot this complex. I finished reading this within 2 days and then immediately bought Book 2. Looking forward to Volume 3's release at the end of September.

A Challenging Work... both to the good and the bad

Published by Thriftbooks.com User , 15 years ago
52 was, if nothing else, a grand experiment. Initially, it purported to show what would happen in the DC Universe during a year without Superman, Batman, and Wonder Woman. Well, the answer there is, as you might expect, pretty much exactly what happens in the DCU books that aren't constantly pandering to the Big Three. That said, what we do get in these books is an array of talent rarely seen in one place and at one time -- especially as regards third string characters. While the quality of the artwork varies at times (and with the huge panel count pages no one involved in 52 could be considered a slouch), the writers miraculously provide a consistent and unified tone. And while 52 does not directly embody the intricacy of an extended Rucka plotline, the unbridled insanity of Morrison, or the straight-up sass of Waid cutting loose; it does show delightful touches of all of three of these authors while remaining generally faithful overall to the work of tried-and-true DC stalwart Geoff Johns. 52 feels more like Geoff Johns on JSA than anything else -- only maybe a bit deeper, a bit nuttier, and a bit funnier -- and for the most part that's a very good thing. Like Geoff Johns' JSA, you also wouldn't consider 52 an "easy" read. There are lots of panels, lots of tiny text bubbles, lots of storylines running haywire all over the place. Countdown, the follow-up to 52 headed by Paul Dini, by counterexample, is a much simpler and more straight forward execution. Because of this, in the moment, it feels more engaging -- but does it resonate so thoroughly? Only time will tell. As befits a book of 52's stature, there are highs and lows, bits that work (Black Adam, Skeets) and bits that don't (Adam Strange, Animal Man, Batwoman). If you plan to read it all, you'll enjoy it. You certainly won't feel gypped. Is it a story that resonates for the ages? No. Is it quote unquote important? No. Does it rival the best work of any of these authors individually? No. But 52 is a solid story overall and one that in places does manage to captivate the soul. Casual buyers, bear in mind that none of these trades will contain anything resembling an arc. For a complete story, you must purchase ALL of the 52 trades. This book: 5 stars. 52, the series: 4 stars.

A Creative Work of Passion, Collaboration, and Quality

Published by Thriftbooks.com User , 15 years ago
I'll admit it, I read every spoiler of this series on a weekly basis. I know how it ends, but even that did not diminish the sheer pleasure I derived in reading 52: Volume I. Reading the collected edition of this series cannot possibly mimic the experience of reading it on a weekly basis, but let me just say that the work most definitely holds up as a collected volume. It progresses smoothly with little to no breaks in consistency, and considering that the men writing it were working as a team and cranking this monster out for an entire year, AND never missed a deadline, well, that just makes me appreciate the work even more. Make no mistake: Volume I is mostly setting up things to come. Even so, I am fascinated with the characters they're focusing on. They've chosen to spotlight characters that are not in the upper echelon of the DC pantheon because, after all, 52 is supposed to take place during a year without Superman, Batman, or Wonder Woman. I love them using lesser-known characters because the reader realizes anything goes, which obviously lifts the level of suspense. But even by the end of Volume I, these lower-tier characters had already won me over. I also need to tell you that while the writing is rock solid, the art changes from issue to issue (as you can surely understand). I found the art more than adequate, but for some people it may be distracting. I truly believe you have to put yourself in the shoes of the creators with this work and keep an open mind on some of the production issues that they had no control over. They pulled off an amazing feat, and best of all, the quality is superb! ~Scott William Foley, author of Souls Triumphant

Published by Thriftbooks.com User , 15 years ago
I bought each issue of this weekly comics as it came out and now I've shelled out for the trade paper back. Why? Because 52 is an amazing soap opera read and is like NOTHING you've ever read before from DC. It's landmark, genre-fusing, crazy, and one of a kind. It really reads well when strung together like this: all the foreshadowing, all that hard work by four of the most talented and creative writers in the business, it's all there from issue one, page one. To complain about the odd pacing issue on a book that came out week-in, week-out for fifty-two weeks is churlish, but as you may or may not now, hard core comics fans can be ridiculously cantankerous. Give em Citizen Kane, they'd moan that it is in back and white, give them The Godfather and they'll bitch that it's not as violent as Scarface. All the blurbs on the book's back jacket, from almost EVERY major press outlet, is there for a reason. 52 is an amazing accomplishment, a bird's-eye view of the DC Universe that takes us through one year in the life of some of its fascinating second and third tier characters. The commentary section after each issue is a very nice bonus and offers insights into how the story changed from it's original conception, how it took on a life and momentum all its own, and how the writers and editors came up with many off their brilliant ideas. In terms of mainstream superhero comics, this is THE series of the last ten years, and it sets a standard of achievement and excellence that will be hard to match! So do believe the hype: this is a rolicking, fun, entertaining read.
Trustpilot
Copyright © 2022 Thriftbooks.com Terms of Use | Privacy Policy | Do Not Sell My Personal Information | Cookie Preferences | Accessibility Statement
ThriftBooks® and the ThriftBooks® logo are registered trademarks of Thrift Books Global, LLC