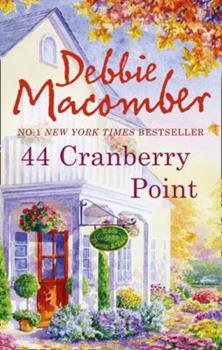 (Book #4 in the Cedar Cove Series)

This description may be from another edition of this product. Olivia Lockhart-Griffin Cedar Cove, Washington Dear Reader, Jack and I are just back from our honeymoon, and I'm eager to catch up with my friends Bob and Peggy Beldon, who run the Thyme and Tide...

Greatest Macomber read yet!!! I can't wait for more!!

Published by Thriftbooks.com User , 14 years ago
The characters I have grown to enjoy through the first three Cedar Cove books are all back and moving forward/backward in their lives. Opening the pages of this book was like going home to visit with these dear friends I've become very fond of. Debbie Macomber has not only given us another visit to this charming town and added new dimensions to the characters, but also provides us with a suspenseful resolution to the murder that occurred back in book one. The focal point of this story is the home of Peggy and Bob Beldon who manage the Thyme and Tide B and B at 44 Cranberry Point. Nerves have been on edge with Peggy and Bob since a fellow Vietnam soldier, Max Russell, was found murdered at the inn. Bob, a recovering alcoholic, has the biggest challenge of his sober years when the need for a drink overtakes him. Will he manage to control himself or will he throw away all his hard work and good intentions? Judge Olivia Lockhart of 16 Lighthouse Road is back from her honeymoon with newspaper editor Jack Griffin, but the adjustment period is harder than either imagined. Can a neat freak health nut live in harmony with a sloppy fast-foot addict? Maryellen and Jon Bowman finally marry and seem happy with daughter Katie. But will the arrival of Jon's parents disrupt their happy home? Can the disowned son ever forgive his parents' betrayal? Jon is stubborn and it will take a major tragedy to get him to even consider reconciliation. Grace Sherman has made a decision and Cliff Harding is the one she wants. Alas, Grace's internet romance with Will Jefferson may have ended any hopes for a life with Cliff. When Will visits Cedar Cove, what will Grace do? Romance is in the air for septuagenarians Charlotte Jefferson and Ben Rhodes, but will a background search uncover facts about Ben that would stand in the way of this romance? Ian Randall is home on leave but tensions are mounting with wife Cecilia. Will they put their grief over losing daughter Allison in perspective and be ready to try to have another child? Private investigator Roy McAfee has been getting strange and rather threatening notes. A package left on his doorsteps is the ultimate cliffhanger ending and it should be no surprise to followers of this series that the spotlight will now shift to the McAfee home at 50 Harbor Street for the next installment in the series. In addition to the main characters, minor characters such as Rachel the nail tech, widower Bruce Peyton, Stanley Lockhart and others make appearances and propel the storyline, thanks in large part to a hilarious Dog and Bachelor auction which makes matches and mismatches aplenty. Debbie Macomber has given us the perfect soap opera in book form and I eagerly look forward to each new installment. I would advise readers to begin at the beginning to eliminate any confusion in this multi-populated series.

Published by Thriftbooks.com User , 14 years ago
The mystery of the B & B is solved althought the killer became obvious it was still fun to read. Charlotte got a love interest, Maryellen moved forward with her life with Jon and their daughter. Cecelia decided it was time for another baby but Ian didn't quite agree. Grace had her hands full with her love interests while Olivia adjusted to life with her new husband. Read and enjoy.

This series really is addicting...

Published by Thriftbooks.com User , 15 years ago
This was the first book that I read in the Cedar Cove series, but even without having read any of the earlier books I really enjoyed it and am looking forward to reading the books that follow. I thought the author did a good job for new readers in giving them some background on the numerous characters, but I did need the handy "who's who" provided at the front of the book and, having put the book down, often had to pause to remember which character was which when I resumed reading. Overall, it was worth the effort to catch up!

Published by Thriftbooks.com User , 16 years ago
I was so excited to get the book from the library. I sat down in one seating and read it. I want to move to Cedar Grove, Washington. But I love the stories about the small town. I would highly recommend it especially if you have liked the other books in the series.

A perfect combination of mystery and romance

Published by Thriftbooks.com User , 17 years ago
Debbie Macomber's 44 CRANBERRY POINT will appeal to both her longtime fans and new readers. Some of the characters here are from her other books, such as 311 PELICAN COURT, 204 ROSEWOOD LANE, and 16 LIGHTHOUSE ROAD. The novel focuses on Peggy and Bob Beldon, owners of the Thyme and Tide Bed and Breakfast. The Beldons are trying to figure out who murdered one of their B and B guests, who happened to be a former platoon member of Bob's squad during Vietnam. The storyline brings in Roy McAfee, a retired cop turned private investigator who is looking into the murder. There are several other storylines going on. Olivia and Jack Griffin are newlyweds who are trying to get used to being married. They both have jobs; she's a judge and he's a newspaper editor. But Olivia is a health nut and neat freak, while Jack is a junk food loving slob. This puts some strain on their new marriage. Marriage is also a topic of discussion for Maryellen Sherman and Jon Bowman. They are due to be married shortly and are already parents to Katie. However, family issues of Jon's threaten to get in the way of their living happily ever after. Maryellen's mother, Grace, is trying to put her life back together after breaking up with her boyfriend, Cliff Harding. A dog and bachelor auction is the vehicle for Grace's friends to try to get her back with Cliff, but will it work? Cecilia and Ian Randall are a young couple trying to get over the devastating grief of losing their infant daughter to a birth defect. Cecilia wants another baby badly, but Ian is scared to try again. He is in the Navy and his fear of Cecilia getting pregnant puts a damper on his being home on leave. Macomber's characters are realistic and so well drawn that her audience will have no problems keeping track of them. Readers will be concerned that the Beldons may be at risk, hopeful that the newlyweds will work through their adjustment period, anxious to see Maryellen and Jon finally marry, root for Grace and Cliff to reunite, and cry with Cecilia and Ian in their anguish. The mystery and romance weave together a plot that will keep readers engaged, and there are twists and turns that readers will not see coming at all. Macomber has written over a dozen novels and has not lost any steam. Her writing style is incredible. This is not "just" a romance. It is so much more. This is a series that will be successful for years to come; the next installment, 50 HARBOR STREET, is due out in September 2005. --- Reviewed by Melissa Palmer
Copyright © 2020 Thriftbooks.com Terms of Use | Privacy Policy | Do Not Sell My Personal Information | Accessibility Statement
ThriftBooks® and the ThriftBooks® logo are registered trademarks of Thrift Books Global, LLC