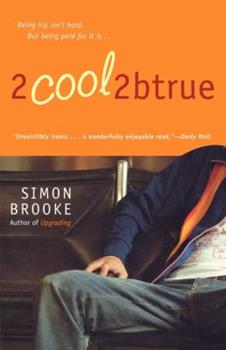 They're moving on up... Charlie Barrett, male model, is ready for a career change. It's not that modeling for ten years hasn't been fun -- the Paris shows, the VIP lists, the cool flat and even cooler model girlfriend. But he and Lauren are probably going to get married and have kids someday so it's time for him to find a job that offers more challenge than tilting his head left or right. Lovely Lauren seems poised to break into TV, so when a chance...

Published by Thriftbooks.com User , 13 years ago
2COOL2BTRUE by Simon Brooke June 14, 2008 Rating 4/5 stars I'm finding that I'm really enjoying these older DOWNTOWN PRESS books. Such fun! In 2cool2btrue, male model Charlie Barrett is ready for a career change. Modeling was supposed to be just a transition to what he'd do later on in life. But in the interim he met fellow model Lauren and the two hit it off. Now living together for quite a while, it seems things are cooling off between them, especially now that Lauren is focused on a career in television. They rarely see each other, and she seems to be spending all her time with her new boss. In the mean time, Charlie is contacted by a man who wants to hire Charlie as a marketing person (marketing happened to be his major in college). This was the chance Charlie had been looking for, a chance to get out of modeling and use his degree. He knew his father had been disappointed when Charlie went into modeling, and now he would be able to prove to his father that he could be as successful with a proper job. The new job is for a start up company called "2cool2btrue", a hip website that would be the place for all those savvy with the Internet to hang out. It all seemed too good to be true, too. He's given carte blanche almost to spend as much as he wants, and notices that his bosses are splurging left and right on many extravagant things. But Charlie, naive as he is, trusts them and figured that the company is doing great. But then the unthinkable happens: The two founders of the company disappear, and no one seems to know where they have gone. And then they all find out that the two founders have been embezzling funds, tons of bills are unpaid, and there is no money left to pay these bills. Charlie is now the scapegoat, as he's the only one left that was "in charge" and he was also a cosigner on several checks. Charlie's world is falling apart, and not only that, his father is acting very strangely, more than usual. Charlie needs to find out what is going on. 2cool2btrue was a really intriguing story that kept my eyes glued to the pages until the very end. It's books like this that keeps me coming back for more. What I loved about this book were the quirky characters, and how the author kept me guessing what was really going on, who was being deceptive and who was being up front. Nora, a journalist who keeps hounding Charlie regarding the company's problems, is a total mystery and kept me guessing about her ultimate motives. Was she just out to get a story, or did she have any feelings for Charlie? The really funny twist to the story had to do with Charlie's girlfriend and her boss, and that doesn't play out until nearly the end. Great story, great writing!

Published by Thriftbooks.com User , 14 years ago
As a male model, Charlie Barrett is always looking for the next job and while at a casting call, he is offered the chance of a lifetime. Charlie is astounded when Guy and Piers offers him the job as the face of 2cool2btrue and decides that it's a job too good to pass up since his girlfriend Lauren, also a model, is trying to get into television work. While Charlie is swept away with the buzz of his new job and the luxury that comes with it, trouble begins and he soon realizes that not everything is as it seems. Charlie is faced with the disappearance of Guy and Piers while his relationship with Lauren drifts further apart. Charlie knows something is very wrong and since Lauren is preoccupied with her TV career, Charlie has no one to turn to except the exasperating and awkward journalist, Nora. 2Cool2Btrue is a thoroughly enjoyable and exciting adventure. The characters throughout this story are engaging and highly detailed. This story contains an abundance of humor and witty banter that gives it the feeling of depth and sophistication. Simon Brooke is a talented writer who has created a fresh and original story. 2Cool2Btrue doesn't miss a beat. By Tammy Fallen Angel Reviews

Where The Web And The Modeling World Meet

Published by Thriftbooks.com User , 16 years ago
Simon Brooke, the author of "Upgrading" is back with "2cool2betrue." Charlie Barnett is now in his 30's and he is kind of tired of the cattle call atomosphere of casting calls for modeling jobs. He knows he is getting too old for the industry. Fast forward a bit and Charlie hooks up with Guy and Piers at a photo shoot. They are very enthused about their latest dot com venture and convince Charlie to utilize his degree and become the marketing man behind their web site 2cool2betrue. It doesn't take much for Charlie to get into his new "proper" job which doesn't seem like much at first but becomes very glamourous and exciting fast. His relationship with his live in model girlfriend Lauren is a little complex. She doesn't really seem that into him. When she also decides to embark on a new career (in television) it's not clear if their relationship will survive. You think "2cool2betrue" is just a fluff little light read and then the situation becomes tense real quick when Charlie finds himself a suspect in a crime and he quickly finds out who his real friends are and who will have his back when he needs it most. With a vengence he sets out to clear his name. "2Cool2BeTrue," is a very interesting read and anyone with an interest in the modeling world will definitly appreciate this title. Even if you were never interested in modeling, this book will really give you a real feeling like you know something about the industry from the less talked about male modeling world. Even though it's well over 300 pages, it's a delightful read that will keep you engaged. One thing I was disapointed about is that the website associated with the book (2cool2btrue) was not yet live when I went to visit.

Published by Thriftbooks.com User , 16 years ago
After an eternity as a male model, thirty years old Charlie Barrett, listening to his younger peers' patter, concludes he is too old for this line of work anymore though the globetrotting, Paris, and money are great. Following a shoot, Piers and Guy offer Charlie a job in marketing their new Internet web site 2cool2btrue.com. He consults with his girlfriend Lauren, who tells him to accept the opportunity so Charlie does. Charlie's new job enables him to apply his long forgotten college degree while searching for luxurious items for the firm to sell over the net to their Armani-like customers, but the long hours and his time spent schmoozing reporter Nora Benthill devastate his relationship with Lauren. Work abruptly collapses when Piers and Guy vanish along with a lot of investor money. The Metropolitan Police investigate "Pretty Boy" Charlie, the face of 2cool2btrue, who turns to his modeling pals to help him prove his innocence, but no one, even Lauren, wants to be linked to him because that could devastate their career. Only the "fickle finger of fate" has Nora there for him. 2cool2btrue is a well written engaging contemporary tale that starts off as a coming of age character study although the hero is thirty, but about half way in turns into an amateur sleuth investigative thriller as a beleaguered Charlie seeks to prove his innocence. In some ways, the story line will remind the audience of the movie the Happening as Charlie at first cannot believe his plight is real, but soon finds his family and friends desert him in his hour of need. The eccentric Nora adds a degree of wacko to what is happening to Charlie. Harriet Klausner
Copyright © 2022 Thriftbooks.com Terms of Use | Privacy Policy | Do Not Sell My Personal Information | Accessibility Statement
ThriftBooks® and the ThriftBooks® logo are registered trademarks of Thrift Books Global, LLC