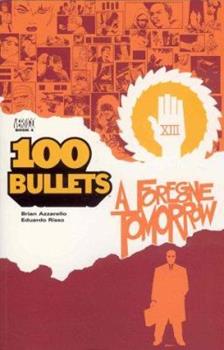 In the fourth collection of this series, Agent Graves continues to offer immunity to everyday people to carry out their innermost desires of vengeance with the 100 bullets that he supplies. But as these self-serving manipulations take place, pieces of the mystery of the Minutemen and the organization that created them start to come together, and we discover to the research and conspiracy theories of Mr. Branch. As more is revealed about the series'...

Published by Thriftbooks.com User , 14 years ago
This is the best trade of 100 bullets I have read, easily. Definitely recommended. More on The Trust, Graves, the younger generation, and some possibles. It is the history between The Trust, and Graves, and who they are, and who the various younger characters that we have been introduced to are, that is the interesting part. Here you learn a lot more about that, and how they relate to each other.

Published by Thriftbooks.com User , 15 years ago
Brian Azzarello, 100 Bullets: A Foregone Tomorrow (Vertigo, 2002) 100 Bullets, Azzarello's take on noir, offers its fourth incarnation up before us. The bulk of the book continues on with the Trust storyline, which is decent. What's really going to blow you away-- and set you up for volume five-- is one story. It's short, but it's worth the price of admission on its own. Graves goes to the hospital to deliver his hundred bullets to someone. As he's on his way out, he meets a man to whom he gave the same offer decades before, and the two of them reminisce about the consequences of their actions. It's an amazing piece, with an even more amazing twist. Even if the Trust storyline isn't doing anything for you, this one you want. *** ?

Finally Lives Up to Its Potential

Published by Thriftbooks.com User , 17 years ago
I'm not a big fan of Azz and Risso's 100 Bullets series. I think it's a wonderful concept, but their execution, concetrating on this boring Minute Man/Trust conspiricy, is a snoozefest. Until this volume.With the thinly veiled Joe Dimaggio/Marliyn Monroe story in this volume, Azz and Risso finally tap the potentional of the concept. Forget the rest of this volume, it, like the rest of the series, is slightly above average conspiricy stuff the occasional character study tossed in. The Dimaggio/Monroe story is a masterpiece and worth the price of admission alone.

Published by Thriftbooks.com User , 18 years ago
I always figured comic books were either for kids or for adults and took themselves way too seriously. Then one day, I was reading a respectable magazine and found an article about comic books. It was then when I realized that I hadn't ever actually read a comic book. So I went down to my local comic book store and bought a few comic books, or "graphic novels" as it seems comic book junkies prefer to call them. The first couple were boring and stupid, but one of them caught my eye. It was 100 Bullets: First Shot, Last Call, and it was quite good, so I returned to the comic book store and purchased a few more. To my surprise, what started out as a simple story about revenge quickly evolved into a hardboiled tale of crime and corruption with beautiful artwork and great writing. I was hooked! This book is absolutely phenomonal. Buy today, you won't regret it.
Copyright © 2020 Thriftbooks.com Terms of Use | Privacy Policy | Do Not Sell My Personal Information | Accessibility Statement
ThriftBooks® and the ThriftBooks® logo are registered trademarks of Thrift Books Global, LLC