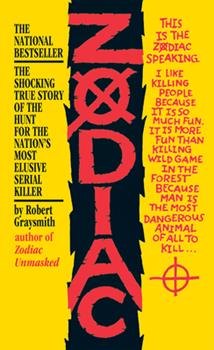 Zodiac: The Shocking True Story of the Hunt for the Nation's Most Elusive Serial Killer

Robert Graysmith's New York Times bestselling account of the desperate hunt for a serial killer and his own investigation of California's unsolved Zodiac murders. A sexual sadist, the Zodiac killer took pleasure in torture and murder. His first victims were a teenage couple, stalked and shot dead in a lovers' lane. After another slaying, he sent his first mocking note to authorities, promising he would kill more. The official tally of his victims...

Scary people out there!

Published by Thriftbooks.com User , 14 years ago
I really couldn't put down this book. It reads like a first rate fiction book. It is horrifying to think that all the events in this book actually took place, and more terrifying still that the serial killer is still at large after over 30 years of evading the police. The killings are gruesome, with some victims repeatedly stabbed to death, while others shot at close range with a hand gun. None of the victims are sexually molested, and they are not robbed of their personal belongings. The killer derives pleasure from killing his victims. As he later tells police in letters sent to newspapers, he kills in order to collect his victims as slaves for the next life! There was one instant where the killer might have been caught. After the Zodiac (as the killer calls himself) shoots a taxi driver, a police car is called to the scene after the gun shot is heard. However, witnesses mistakenly reported a black man at the scene. The Zodiac is a chubby white man. When the police arrive near the scene, they see the Zodiac walking, and stop by him to ask him if he had seen a black man in the area. He says yes and points to the direction he allegedly saw a black man with a gun running. If the police would have stopped and interviewed the Zodiac more carefully, they would have seen his bloody hands. There is no telling what would have happened then. The police could have been shot dead, or maybe it could have been the other way around (there were two policemen in the car.) The Zodiac also called the police after committing some of the crimes - from phone booths adjacent to police stations! Another chilling instant was when the Zodiac stopped a pregnant woman and her child on a road claiming that her back tire was wobbling. He volunteered to fix the tire, and while the woman watched from her side view mirror, he appeared to do just that. However, as soon as she drove off, the back tire completely came off and she had to stop. She was then kidnapped by the Zodiac and driven around for almost an hour, as if the Zodiac was looking for an ideal place to kill his victim. However, the woman together with her child manage to jump out of the car, and escape death! Not all of Zodiac's victims died. Although some victims were repeatedly stabbed, some survived! In all, it is believed that the Zodiac might have killed about 37 people. He is still at large! It was quite amazing how an amateur code breaker was able to break the coded letter of the Zodiac within a day and night. After the coded letter was published in a newspaper, neither the FBI nor the police were able to decipher the letter. However, an amateur man did! The FBI should have hired him! This book will keep you reading throughout the night. It includes photos of the letters sent by the Zodiac that will send a chill up your spine. I just couldn't put this book down.

Published by Thriftbooks.com User , 14 years ago
A lot of other reviews note the stretches, hunches and speculation that appear in this book as its primary weaknesses. None of them, however, note that most police work is based on hunches and stretches, and most crimes are solved through nearly blind speculation. In fact, crafting the opening salvo of solving a crime is all speculation, as the only people who were actually at the scene as the crime took place were the victims and their killer, not the police. Thus, the speculation is necessary to approach the task of solving any crime. As a result, the loose ends in this book are a very necessary and a common component to solving any crime. The Zodiac killings are very close to me as I am a lifelong resident of the San Francisco Bay Area. David Berkowitz was in New York City, Jack the Ripper was a phantom of London and the Manson Family had operated primarily in Southern California. All were far, far away. The Zodiac was right in my backyard. To this day I still get chills when after passing over the Benicia Bridge, I see the green traffic sign hanging over the highway that reads, "Lake Herman Road, Next Right". Lake Herman Road of course, being where the Zodiac first struck by murdering teens Betty Lou Jensen and David Faraday, as they sat parked in a remote lover's lane. The constant interest and apparent obsession with the Zodiac murders is concentrated around two facts of the case: firstly that the Zodiac was never caught. All this book and most others do is outline what the author believes to be the best, most likely suspect. The other reason why people are so drawn to this case is the odd and mysterious way the killer stalked his victims and taunted the police after the crimes. After a killing, the Zodiac would usually call in and report his own crime. More shocking than that, he usually did it within sight of the police stations he had been taunting. If that weren't enough, he wrote ciphers, or coded messages, and sent them into the local newspapers. Some of these ciphers were solved, yet many were not despite the best efforts of the law enforcement community throughout North America. Graysmith takes us on a rollercoaster ride as the crimes are committed. The reader can visualize and feel the cold, dark night on Lake Herman Road. The same feeling is present when the man who stalked Darlene Ferrin for months prior shows up just a few miles down the same Lake Herman Road where the first double murder was committed, on a turn out for the golf course at Blue Rock Springs. It's here where he takes the life of Darlene and leaves Mike Mageau clinging to life. The reader is transported to the remote, grassy peninsula by Lake Berryessa where the Zodiac first donned his executioner's costume, and where he stalked his victims, leaving only one of them barely alive. Finally, we get inside Paul Stine's cab with the Zodiac as he commits his most infamous crime on the cold, damp streets of the Presidio Heights of San Francisco. Graysmith goes into

A Page Turner and Thrilling Mystery!

Published by Thriftbooks.com User , 14 years ago
I bought this book after seeing David Fincher's excellent film "Zodiac" and the book is even better! It's a real page turner! It's in diary format and is very suspenseful, told in mystery style. I was expecting a fact by fact book, but this is a story and the book progresses as each suspect is identified. Even though I knew that the killer is not caught, I kept hoping that he would be caught. Robert Graysmith is a very good writer and a great investigator! I enjoyed this book so much that I immediately bought "Zodiac Unmasked". If you enjoy a page turning, suspenseful book, then read "Zodiac"! You won't be disappointed!

Published by Thriftbooks.com User , 14 years ago
Several years ago, I read "Zodiac Unmasked" by Robert Graysmith. The disorganized writing style detracted from my enjoyment of the book. I recently got around to reading Graysmith's original book "Zodiac". While this book is much more professionally written, it only differs from "Zodiac Unmasked" in that "Zodiac" refers to prime suspect Arthur Leigh Allen in the alias Robert Hall Starr. Graysmith still has the same suspect in mind for both books and he has only convinced me that to an 80% degree of certainty that Allen is a viable suspect. Rather than recount the crimes of the Zodiac in this review, I would recommend using several web sites which might give those interested a concise version of the Zodiac. Many aspects of this story that are not in print are suggested on the web, though truthfulness has to be questioned. The Zodiac Killer may be the most mysterious and elusive serial killer in American history. The continued question about the killer's identity has left readers looking for answers. This book is a good place to start your search to for an answer that may never be found.

One of the Best of it's Type

Published by Thriftbooks.com User , 19 years ago
If you are a fan of true crime books then this will be one of your favorites after you read it, because of the mystery surrounding the case as well as the fact that the details are so odd. The book details the case of the "Zodiac" killer that was active in San Francisco in the 1960's. One of the items that made this serial killer different is that he would send taunting letters to the police. It is also interesting in that the killings were never solved in that the killer was not caught. The author gives us a mass of details about the police investigation, including the full text and photos of most of the letters. He just does a great job of telling the story. He really "puts" you into the time frame with his writing, you almost feel that the events are taking place now. This is truly one of those non-fiction books that read just like a great novel. You will not regret taking the time to find this book and read it.
Copyright © 2020 Thriftbooks.com Terms of Use | Privacy Policy | Do Not Sell My Personal Information | Accessibility Statement
ThriftBooks® and the ThriftBooks® logo are registered trademarks of Thrift Books Global, LLC