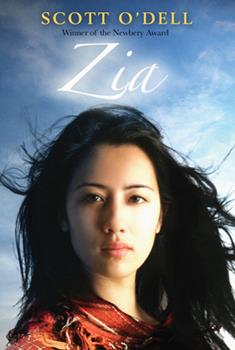 (Book #2 in the Island of the Blue Dolphins Series)

A young Indian girl, caught between the traditional world of her mother and the present world of the mission, is helped by her Aunt Karana, whose story was told in Island of the Blue Dolphins.

A story that provides food for thought

Published by WolfieGrrrl , 7 months ago
This sequel to "Island of the Blue Dolphins" is a sad glimpse into what living at the Santa Barbara mission would have been like. Scott O'Dell does a good job of making it clear how each character feels about their situation and why; and even though the story is told through the lens of an opinionated young teen, his writing allows the readers to pick at a deeper truth behind the words so as to not sway anyone to one side of a multi-faceted issue. The way the characters interact with each other is telling enough and it certainly provides a lot to think about.

Published by Thriftbooks.com User , 16 years ago
I love this book, and I love Zia, but it is very sad. Zia is very strong and determined, but she doesn't care for anything but Karana. She closes her heart to everyone but Karana - even before she actually meets her, she only thinks of her and only wants her. And then... she finds herself all alone. Even her younger brother, who loves her so much, leaves her, because seeing that there is no place for him in Zia's heart, he gives his heart to the sea. It's also sad that Father Vicente's good intentions don't work out because they are not practical, and that means there is no way at all for the Indians. They can never become what the Europeans want them to be - and in the way they are there is just no place for them in the new world the Europeans have created.

Zia is a great and wonderful story

Published by Thriftbooks.com User , 19 years ago
+Zia is such a awsome story! It is about a girl named Zia who is Karanas neice,she lives at the mission Santa Barbara with her little brother Mando.One day Mando and Zia find a old whale boat that drifted up onto shore and decide to use it to go and rescue Karana from the Island Of The Blue Dolphins. Im not gonna say any more about what happens because you will have to find out for your self.

Way Better Than Island Of The Dolphins

Published by Thriftbooks.com User , 21 years ago
I had to read Island of The Blue Dolphins in class and it was so boring. Many times I had my mother read it to me. Carina's plot just wasn't interesting. The whole idea of Carina being left behind and looking for her brother just didn't really give alot into it. About one year later, I picked up the book "Zia" at the library and thought 'This is gonna be like the first, boring plot'. Boy was I wrong. In "Zia", Carina's sister had children with a spanish man, making Zia and her little brother. When Zia finds this boat, she immediately wants to go to The Island and rescue her long lost aunt. On the way to the island, a group of men stop her and make both Zia and her brother slaves. I read this book in two days because it has so many turning points. Will Zia and her brother make it off the slave ship? Will they ever be united with their long awaited aunt? You'll have to read this story in order to find out.

It was a great book and I think it deservs a 9.

Published by Thriftbooks.com User , 24 years ago
I liked "Zia" very much because it tells what happened to Karana, the Indian girl from the Island Of The Blue Dolphins. Scott O'Dell had so much detail that I thought that I was Zia. If you liked "Island of the Blue Dolphins" I gaurantee that you will like "Zia" too.
Trustpilot
Copyright © 2022 Thriftbooks.com Terms of Use | Privacy Policy | Do Not Sell My Personal Information | Cookie Preferences | Accessibility Statement
ThriftBooks® and the ThriftBooks® logo are registered trademarks of Thrift Books Global, LLC