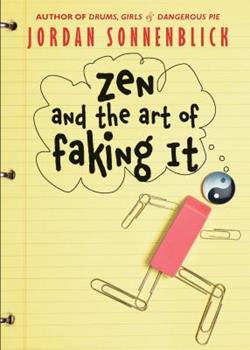 Zen and the Art of Faking It

From masterfully funny and poignant Jordan Sonnenblick, a story that will have everyone searching for their inner Zen. Meet San Lee, a (sort of) innocent teenager, who moves against his will to a new town. Things get interesting when he (sort of) invents a new past for himself, which makes him incredibly popular. In fact, his whole school starts to (sort of) worship him, just because he (sort of) accidentally gave the impression that he's a reincarnated...

Zen and the art of faking it

Published by Thriftbooks.com User , 13 years ago
Awesome Book!!!!! If you ever think your boring and consider lying you seriously need to consider reading this book! It will make think twice about what you say before you say it. it holds your interest all the way to the end. I finished it in 1 day, because i couldn't put it down.

Published by Thriftbooks.com User , 13 years ago
I read ZEN AND THE ART OF FAKING IT when it first came out and as a writer I conked myself in the head and said, "Why didn't I think of that?" ZEN is absolutely brilliant in its simplicity. Packed with humorous antics, a fast-paced plot and really likable characters, ZEN is sure to please! Looking forward to Sonnenblick's next!

If you had trouble fitting in at school, this is your book

Published by Thriftbooks.com User , 13 years ago
If you ever had trouble fitting in at school, you need to read this book. San Lee, who was adopted, has moved and is not quite relating to his new student body. Then he finds Mr. Dowd, his social studies teacher. Mr. Dowd loves Tao and world religions, so San Lee reinvents himself after loooong hours at the local library. He becomes known as the Zen kid! Of course all this involves a girl; her name is Woody - not really, of course, but that's another story. This funny book is also very heartwarming and poignant. It's a great read!

Published by Thriftbooks.com User , 14 years ago
Author Jordan Sonnenblick has done it again. ZEN AND THE ART OF FAKING IT gets the up and downs and total frustration of being a teen just right. San Lee's life has been full of new towns and new schools, but this one upsets him more than all of the others combined. This time, instead of having his dad uproot the family in search of his latest scheme, it is just San and his mother because his dad is in prison. Not particularly successful at anything in the past, San has frequently used negative behavior to get attention. Being Oriental and adopted by a white couple has not always made things easy. Now with his father serving time for his shady business dealings, San finds himself feeling the need to get things right this time. Faced with not only a new school and trying to fit in, but also with Wednesday night phone calls from a convict father he never wants to talk to again, San is ready to try just about anything. With his mother working long hours to make ends meet, he decides he needs a gimmick to win some friends and positively influence some people. Thanks to his new social studies teacher, the door to Zen Buddhism opens wide. San's well-worn clothes and tattered sandals become a great disguise as he steps into his role as the Zen expert of the eighth grade. With help from the local library, the perfect "meditation" rock right outside school, and his new friend, Woody, San fools everyone into believing his Buddhist philosophy. Although he seems to be fitting in and gaining popularity, he worries that faking it may make him like the father he has learned to detest. Sonnenblick uses his humorous, straight-forward style to grab readers on page one, and whisk them into San's world. There are crazy antics, a touch of romance, family frustrations, and quite a bit of Buddhist information packed into this fast-paced read. If you haven't read Sonnenblick's other books, be sure to check out Drums, Girls, And Dangerous Pie and Notes From The Midnight Driver. Reviewed by: Sally Kruger, aka "Readingjunky"

Published by Thriftbooks.com User , 14 years ago
You know how some people are just naturally hilarious? Jordan Sonnenblick is one of those people. ZEN is an awesome book, containing most excellent dialogue and a plot that will keep you up very late, reading until your eyes hurt to find out what happens next. This is the story of San Lee, new kid, who's trying to fit in by...well, not exactly being himself. We love San right from the start. Like the rest of us, he has baggage to deal with and family issues and someone special in his life he's trying to impress, and we're sympathetic to his struggles. You'll love how San changes as his confidence grows. And the Zen bits are really fun. Read it. Love it. Pass it on.
Copyright © 2020 Thriftbooks.com Terms of Use | Privacy Policy | Do Not Sell My Personal Information | Accessibility Statement
ThriftBooks® and the ThriftBooks® logo are registered trademarks of Thrift Books Global, LLC