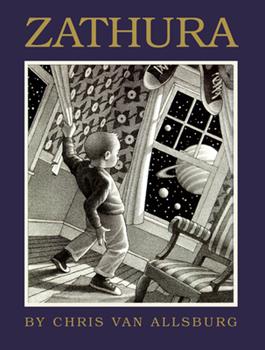 (Book #2 in the Jumanji Series)

Acclaimed author Chris Van Allsburg's daring companion to Caldecott-award winning Jumanji--a tale of intergalactic adventure and sibling rivalry where a roll the dice transports two brothers to the mythical land of Zathura. Taking place where Jumanji ended, older brother Walter warns his pesky little brother Danny not to bring home the mysterious board game they find at the park. But when Danny's curiosity gets the better of him, the brothers have...

NOT HIS BEST BUT GOOD SOLID WORK

Published by Thriftbooks.com User , 16 years ago
I am a big fan of Allsburg's art work. His capturing of shades is almost magical. This work is no exception. I was not as thrilled with the narrative of this one as I was with much of his other work though. This author obviously has a great imagination and great story telling abilities...he probably could have put them to better use here and been a bit more original. That being said, this is still a very good book and certainly worth owning. Recommend it highly.

Published by Thriftbooks.com User , 19 years ago
Zathura by Chris Van Allsburg is the sequel to Jumanji. However, you don't need to know this in order to enjoy Zathura. Zathura is sort of like 2001 A Space Odyssey for children. Two brothers have mysteriously discovered the Jumanji game board. When you play the game a parallel universe is created in which events on the board occur in real life. This time the two brothers find a new game called Zathura. Zathura is a space board game. What makes this story fascinating and exciting is the way Van Allsburg is able to weave together a story of sibling rivalry with elements of astronomy. Black Holes, parallel universes, time travel Etc.. If the brothers want to survive the game they must learn to work together and put aside their jealousies. The story creates a real sense of danger for them. We aren't sure how things will turn out for the brothers. The ending of the story is a real brain twister. The illustrations of the two brothers flying through outer space in their house are mind blowing. The payoff for this story is in it's big ideas, not in pictures of monkeys storming through a kitchen. Van Allsburg has already done this in Jumanji. In Zathura he wants to break new ground. Zathura is smart and daring in the way it is willing to take risks by presenting large ideas to children.Preston McClear, author The Boy Under the Bed

Published by Thriftbooks.com User , 19 years ago
Rarely is a sequel equal to the first book. This is an exception! A thoroughly great adventure!

Published by Thriftbooks.com User , 19 years ago
At long last, 20 years after Jumanji, Chris Van Allsburg's new picture book, the sequel, Zathura, picks up where we left off, with Walter and Danny Budwing opening the long thin mysterious game box containing the amazing and dangerous game called Jumanji. Much to our surprise the box contains more than just the Jumanji game. Danny and Walter are the kind of kids who don't finish their puzzles and don't read the directions before starting a new game. Just like its predecessor, Zathura takes us on a wild ride at break-neck speed and the boys are just one step away from disaster in every second of this suspenseful tale. Van Allsburg's artwork is his characteristic black and white, surreal, humourous and detailed wizardry. The action is edge-of-the-seat and sure to thrill young readers and story listeners in equal measure with Jumanji's jungle adventure as the brothers try to come to terms with the alien environment of the purple planet Zathura. Don't miss this one. It's out of this world!

"Out of this World!" Literally!

Published by Thriftbooks.com User , 19 years ago
Once again Chris Van Allsburg draws the reader into a magical world that only he can create. Destined to be a classic. This is a MUST for the Jumanji and Van Allsburg fan. His books can be read again and again with enhanced enjoyment over time. Don't miss this book!
Trustpilot
Copyright © 2022 Thriftbooks.com Terms of Use | Privacy Policy | Do Not Sell or Share My Personal Information | Accessibility Statement
ThriftBooks® and the ThriftBooks® logo are registered trademarks of Thrift Books Global, LLC