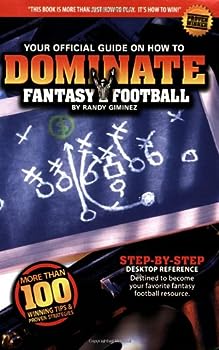 Your Official Guide on How to Dominate Fantasy Football

This book is not just about playing-It's About Winning! - Great for both beginners and experts - Proven winning approach to fantasy play - Filled with over 100 tips, strategies and tidbits - Never... This description may be from another edition of this product.

Great book. But not the Bible on Fantasy Football

Published by Thriftbooks.com User , 14 years ago
First, let me state that Randy Giminez has written a great book for the fantasy football fan. I highly recommend it as an addition to your fantasy football collection. While I do not agree with everything he writes (see below), I found myself highlighting much more in the book than I did placing question marks. In fact, after reading his bio at the end of the book, I think we have much in common. Dominate Fantasy Football (DFF) offers a tried and true method of instruction (Tell them what you are going to tell them; tell them and then remind them what you taught them). He uses bolded text to bring attention to his subject and italicized text for his personal experiences. DFF is a flashy, fun, illustrated book that examines fantasy football and specifically one season in the CBS Sportsline leagues. Much of the statistics are from his 21 leagues and 3,500 games from 2005. I found his ranking system to be innovative. Likewise, his data about draft position and winning in a normal serpentine draft coincide with my own observations. The draft as we know it is flawed in that the top teams have an obvious advantage even with the second round reversal of order. Much of his insight is right on the money. I totally agree with his `assistant coaches" chapter and his choices for web sites as resources for help. I also found his chapter on "claiming your winnings" to be expertly explained. While Randy goes to great pains to point out on numerous occasions that his strategies are for the leagues at CBS Sportsline; the reader must do his own work to decide which concepts are appropriate for his or her league. I have attempted to help with that below: I have some issues with the CBS Sportsline leagues. 1) Limits on numbers of players you can draft at positions. Leagues like CBS Sportsline where you are limited in the number of players at certain positions (QB, RB and WR) make it much easier for someone to dominate through luck; if I can only have 6 RBs than later when a injury occurs the fast team or worst team can pick the new RB from the waiver wire. As opposed to allowing the skilled owner draft him in the draft. These leagues handcuff an owner which I think is a bad thing if you truly want to compete against the best players. None of the large High Stakes leagues (WCOFF or NFFC as examples) place any limits on maximum number of players at any positions. 2) Roster lockdowns occur very early in the week. This essentially makes any information you can glean on your own through hard work useless since you cannot change your roster based on the information. This rule helps the lazy and hurts the skilled player. 3) Waiver wire priority based on worst teams first. Helps the lazy team, penalizes the good players. Why should a team be penalized for winning? And another rewarded (with a higher waiver wire priority) for losing? 4) Trades allowed. Allows the possibility of collusion. Anytime I play for the kind of money Randy won ($3,500 top prize, $1,600 runne

Published by Thriftbooks.com User , 16 years ago
Having played Fantasy Football for 7 seasons I thought I knew how to play the game, but reading DFF shows me why Randy is a winner and I haven't been. Randy has techniques for evaluating not only the very best players, but the very best players for your team to win when winning is most important, in the Play-offs. Spreadsheets are ultra important to keeping data on players and teams and can become so complicated as to be useless on draft day. Randy will show you how you can quickly identify your targets with just a glance at your data while drafting. This information will start your domination of your league right from the start. The tips for the rest of the season will keep you on top, and put you squarely in position to win your league. If you read this book you will be amazed at what you don't know. I will follow Randys advice to the top this year. If you're smart, you will too.

Published by Thriftbooks.com User , 16 years ago
"Dominate Fantasy Football" is the first book I've read with clear, concise, and useful information for serious or casual fantasy players. I can't imagine a successful draft without following Randy's guidelines. "Dominate Fantasy Football" is all about winning, regardless of your skill level. If you don't buy it, your competition will.

I recommend this book to anyone trying to win.

Published by Thriftbooks.com User , 16 years ago
As an avid fantasy football player for the last eight years I've had several championships. I've spent countless hours researching and reading articles and on-line forums to hone my skills and strategies. But Randy's book took all that and boiled it down to an easy read with detailed instructions. I would loved to have read this eight years ago! The author claims to have an "expert" ranking in chess through the US Chess Federation, and it shows in this book. The way he analyzes the game, the rules and the opponents is deeper than anything I have ever done. I not only got reinforcement for the way I have been doing things, but also got detailed strategies and instructions on how to take it to the next level. I truly think anyone could get better at fantasy football by reading this book.

Published by Thriftbooks.com User , 16 years ago
The guide on "HOW TO DOMINATE FANTASY FOOTBALL" is a fantastic resource to have regardless of the skill level of fantasy football player. It is a "must-have" at every fantasy football draft. -Dean Dokken, author-"THE FANTASY FOOTBALL BIBLE"
Trustpilot
Copyright © 2022 Thriftbooks.com Terms of Use | Privacy Policy | Do Not Sell or Share My Personal Information | Accessibility Statement
ThriftBooks® and the ThriftBooks® logo are registered trademarks of Thrift Books Global, LLC