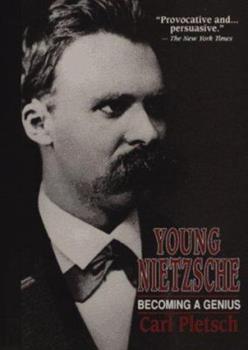 In this biographical inquiry, Pletsch argues that the fatherless young Nietzsche deliberately and self-consciously set out to become a genius, absorbing the work of mentors like Schopenhauer and Wagner, who taught him how to marshal his creative energies.

This Book is about a Genius

Published by Thriftbooks.com User , 21 years ago
If there is a problem with this book, it is that its conclusion, "Redefining Genius" is still too vague to make any particular genius of much significance. Due to media influences, social thought now is largely a matter of public opinion, and I may have few companions in the belief that, of course, it was quite proper for Nietzsche to rise to an attack upon his own age, its public opinions, and all the ways in which people prefer to fool themselves. I am grateful to this book for its outlook; merely mentioning its title is often enough to convince others that I don't have to agree with them. The index doesn't have a listing for jokes, and the author seems to associate them quite closely with the scandalous life of the composer, Wagner. On page 120, we are told, "If that was not enough, there were Wagner's coarse jokes, which frequently involved Cosima." My own interest in developing the idea of a fetish involving Nietzsche's relationship with the Wagner family has relied on the information in this book, on that very page, that Isolde was born in April 1865, so she was four when Nietzsche first stepped into that family circle. Other sources indicate that Nietzsche stopped visiting the Wagners before Isolde turned twelve, when the composer began trying to teach Nietzsche something about religion. Things which may have been left out of this biography might not be helpful for understanding the nature of genius. Or maybe the worst idea of a genius would be someone who knew what all these people were thinking and wrote it down.
Copyright © 2022 Thriftbooks.com Terms of Use | Privacy Policy | Do Not Sell My Personal Information | Accessibility Statement
ThriftBooks® and the ThriftBooks® logo are registered trademarks of Thrift Books Global, LLC