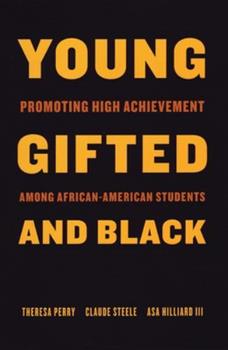 Young, Gifted, and Black is a unique joint effort by three leading African-American scholars to radically reframe the debates swirling around the achievement of African-American students in school. In three separate but allied essays, Theresa Perry, Claude Steele, and Asa Hilliard place students' social identity as African-Americans at the very center of the discussion. They all argue that the unique social and cultural position Black students occupy,...

Published by Thriftbooks.com User , 11 years ago
Not as quick a delivery as two other things ordered at same time. Sister is happy with book though.

Great read for ANYONE interested in Black issues or education

Published by Thriftbooks.com User , 13 years ago
This was probably THE best book I've read in a long time. This book is not just for educators. It is written in a way that makes it informative to ANYONE interested in African-American history or how the history of a group in the country can affect how the group interacts with other institutions. Also, this is not a long book, nor is language TOO difficult so I feel that ANYONE should be able to read this. The book consists of three essays, one of which is broken into three parts. The first essay, by Perry, is three parts. I absolutely LOVED this entire section. It does an exceptionally good job of supporting her argument that there always has been an African-American philosophy of education and proposes that this philosophy is actually probably the best tool there is to increase achievement of African-American students. I just thought the evidence Perry gave of this African American educational philosophy was very thorough. The second essay discusses Steele's theory of stereotype threat, with which I was already very familiar. His essay does a good job of describing the concept to those who AREN'T already familiar with it and adds a bit more for those who already know it. Basically, stereotype threat is a concept to explain how ANY person (not just black people) can experienced decreased performance (not just in school, but anywhere) because of the real threat of fulfilling a negative stereotype. The essay discusses research he and others did with blacks, women, white men, as well as others. The essay also did a good job explaining how race and racism can still impact the performance of blacks who are not economically disadvantaged. The last essay, which was by Hilliard, was actually my favorite. Hilliard had very innovative ways of thinking about how we measure achievement among ALL groups in terms of education and how past prejudices have shaped our ways of dealing with achievement today. Hilliard makes mention of various successful methods that have been used in working with those who supposedly couldn't be worked with. This essay was my favorite because rather than simply informing, it posed many questions to the reader about the status quo in the world of education.

Published by Thriftbooks.com User , 13 years ago
This book has useful information for individuals working to improve educational systems at all levels. The first chapter makes explicit a part of the context of the African American educational experience in the US--the long, resilient tradition of the quest for literacy. This history is well-known among African American educators, but is useful to white allies who can use the reminder and the specifics, and critical to others who may slide too easily into negative group stereotypes. I love Claude Steele's work on stereotype threat and value his comprehensive summary chapter here. It adds concrete strategies to the body of experimental research he has contributed to the scholarly literature. Hilliard's chapter has an even greater number of useful strategies and makes the important point that educators should aim for excellence in the academic performance of their African American students, not just performance that equals the performance of whites. His presentation of numerous examples of classrooms that produce enthusiastic, knowledgeable, skilled learners is a must-read among educators who find themselves blaming students and families for low performance. Good instructors are in short supply and will continue to be a problem in the foreseeable future, but there are many strategies and thought patterns in this book that schools can immediately put into place to support the success of African American learners. In fact, when instructors understand the major themes of this book, they will naturally be better teachers of all children. I'm passing this book on to state educational administrators.
Copyright © 2022 Thriftbooks.com Terms of Use | Privacy Policy | Do Not Sell My Personal Information | Accessibility Statement
ThriftBooks® and the ThriftBooks® logo are registered trademarks of Thrift Books Global, LLC