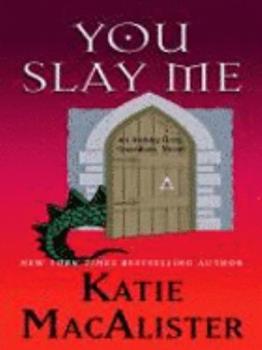 You Slay Me [Large Print]

This description may be from another edition of this product. Aisling Grey is a courier enjoying a free, work-related trip to Paris when she learns she's a Guardian. That's a keeper of the Gates of Hell, for those who don't know. She finds this out from Drake...

Published by Thriftbooks.com User , 17 years ago
This was the first Katie Macalister I had read, but it won't be the last! Think of this as Anita Blake-lite - same powerful, sarcastic, stubborn lead character, but with less scary moral dilemmas. Aisling (pronounced ASH-ling) is new to the Otherworld, and although she's been studying demons as a hobby for years, she doesn't quite believe in them. She finds that she's a Guardian but she doesn't really know what she's guarding or how to go about doing it. I won't get into any more plot details - no spoilers here! This is a really good read - I laughed out loud in a couple places (I hardly ever do that). One of the cases was Jim's little cheer for the final conflict - you'll have to read it for yourself to find out who Jim is! I highly recommend this book if you're looking for something light to read - this looks to be a very good series!

what an original book!

Published by Thriftbooks.com User , 17 years ago
My cousin is forever sending me books she thinks I NEED to read. She sent me Men In Kilts and I found the book so engaging, so laugh aloud, yet with so much heart and substance. So when I opened my care package and found this book, I was glad to see another Macalister book. This book is simply amazing and I cannot wait for more in the series. Just so refreshingly amazing, the humour, again, is laugh out till your sides hurt. So this lowly male cannot wait for another edition of this series.

Funny and hot (and I'm not just talking dragon breath)

Published by Thriftbooks.com User , 17 years ago
You Slay Me is a hilariously funny cross between a sizzling little Silhouette novel and a (lighter) Laurell K. Hamilton Merry Gentry. Heroine Aisling (pronounced Ash-lin) is a Guardian, which means she's supposed to be able to call up demons, open and guard portals and do all kinds of other witchy type things. The problem is, no one's told Aisling. On a trip to Paris to deliver a ancient artifact, she stumbles into a murder scene and a seriously strange underworld society of dragons, Wiccans, demons and other assorted magical creatures. Not only does Aisling lose the artifact, it's stolen by a wyvern, who just happens to be her dragon-mate. Obviously the start of a series, You Slay Me deftly wraps a whodunnit into a paranormal package. A fair bit of the book is spent explaining who and what various people are, what Aisling's powers are supposed to be and descriptions of how she learns to use them. Those passages are woven seamlessly into the story though, and never seem to be obvious or boring. The dialogue is very funny, especially Aisling's conversations with her French taxi driver, who teaches her some hilarious French phrases to use when people bother her. Macalister injects humor throughout the story, with a clothing store named after a rotten apple, a hotel called the headless woman and more. Aisling is what you'd expect: smart, resourceful, brave and beautiful. Her dragon Drake is sexy, powerful and mysterious and Macalister does a great job at firing up the sparks between these two. The handful of sex scenes are steamy without being grossly graphic. This is a very funny book, a lot like the Undead and.. series by Mary Janice Davdison in both characters and tone. I am looking forward to the sequel due to come out next spring; this book resolves the murder mystery but leaves enough open to have me eager for more of the story.

Katie MacAlister does it again!

Published by Thriftbooks.com User , 17 years ago
So, already being a pretty big Katie MacAlister fan, I was fairly sure I was going to enjoy her latest book, You Slay Me -- but I was a little concerned that the book is not really a paranormal romance in that there was not going to be the usual HEA that romances generally have. This book is to be the first in a series of books starring many of the same characters, and while Aisling (the heroine) and Drake (the hero - sort of) share lots of sparks, their relationship is going to develop over a series of books, rather than coming all together at the end of this one. And I have to say that I thought Katie MacAlister did a really good job of satisfying her readers' expectations of some hot, steamy scenes, but leaving the door open for more of this relationship in the future. Aisling is funny and quirky, and Drake is simply delicious in that wonderful unrepentant bad-boy way that can be so appealing, and Jim the demon-in-dog-form is just plain hilarious. I don't think any MacAlister fans will be disappointed in the ending -- she just leaves you begging for more! I would recommend this book not only to those who already enjoy Katie MacAlister's books, but also to those who haven't tried her books because they're not really romance readers -- I think You Slay Me will surprise you.

another brilliant madcap adventure from Macalister!

Published by Thriftbooks.com User , 17 years ago
When I read Anne Stuart I often ponder what she eats to stay so good from book to book. When I read Katie Macalister that never crosses my mind. I don't think she eats, they just plug her in! She's had 16 books (under Macalister and Maxwell pennames) in two years and shows no signs of slowing down! Most writers burning up the keyboards would begin to grown "less fresh, less original" with each book. Not Macalister. I think she just gets better and better with each novel! Her current release The Trouble With Harry, is my favorite to date, a brilliant tripping of the light fantastic with characters to warm your heart. But there I go again, as I do with each release, I have another fav! You Slay Me. A smart, sexy, smart-mouth, laugh out loud kick off to a new series!You Slay Me, is another of Macalister's first person rants as her character muddles through life. Ordinarily, I shy away from first person books because they tend to numb my mind with I, me and mine to where I get focusing on seeing those three words till I want to scream. However, Macalister's Magic is I don't see those words when she does first person. She has such a smooth style you really don't notice it, other than it lends to giggles galore. You Slay Me is the first Aisling Grey novel, and after reading it, I am definitely eagerly awaiting more Aisling novels.Aisling is an Irish name pronounced ash-ling and ASH-ling is starting her new job as a courier for her uncle's business. See Aisling HAS to have this job. The court has order her to pay alimony to her deadbeat surfer hubby so he can sit around all day and watch plastic-chested beach bunnies, a situation she is NOT happy about! Her first job for Uncle Damian (hum...one thinks of the Omen movies and instantly wonders if Sam Neil is Aisling's Uncle!) is to carry a six hundred year old gold dragon to a woman named Deauxville's in Paris. Getting through customs was nearly more than Aisling can handle - and that just dealt with trying to get the customs man to learn to pronounce her name right! So she is not happy after the nutty cabdriver drops her of at Ms. Deauxville's address and she finds her dead.Naturally, Aisling is accused of the murder and the gold artifact is stolen. As she tries to clear herself, she learns she is a Guardian - that's Keeper of the Gates to Hell to the rest of us mortals. Aisling learns this from sexy Drake Vireo. Aisling thinks Drake is totally scrumptious - in his human form that is - because Drake (catch the name giving you the clue) is a real-life dragon. I am not playing spoiler - this revelation comes on the back cover! Drake stole the gold dragon - thus starting off a mad cap adventure.Aisling's new career as courier on a bad foot, not to mention the murder rap hanging over her head. Drake also informs Aisling she is a wyvern's mate. What's a wyvern you ask? It's old French - a mythical animal with 2-legged wings and just happens to look like - you guessed it - a dragon!
Copyright © 2020 Thriftbooks.com Terms of Use | Privacy Policy | Do Not Sell My Personal Information | Accessibility Statement
ThriftBooks® and the ThriftBooks® logo are registered trademarks of Thrift Books Global, LLC