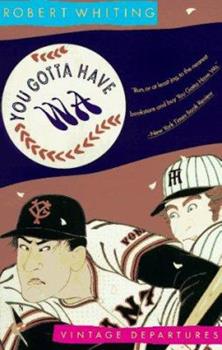 You Gotta Have Wa

An important element in Japanese baseball is wa--group harmony--embodied in the proverb "The nail that sticks up shall be hammered down". But what if the nail is a visiting American player? Here's a look at Japanese baseball, as seen by baffled Americans

Baseball and much more

Published by Thriftbooks.com User , 17 years ago
Longtime Japan resident and journalist Robert Whiting's classic book on Japanese baseball is as fresh today as when it was published. The book begins with the arrival of Bob Horner, a 29-year-old bonafide all star who was still in his prime when he arrived to play for the Yakult Swallows. Waiting for him when he landed at Narita Airport were 200 journalists, a team owner who confidently predicted--and expected--that the overweight Horner would hit 50 home runs (Horner was assigned the number 50 on his uniform as a not so subtle reminder), and a year contract worth $2 million. What Horner did not know was how different yakyu (literally, field ball) would be from the baseball he knew in America. The regimentation of Japanese teams, the rules governing many aspects of life both on the field and off--and the adjustment of moving around the world to live in a very different culture--had been and still is the undoing of many players. Whiting's work is about more than baseball and sports; it is about how Japan and Japanese approach things, how that which is imported must first be Japanized. Highly recommended.

Published by Thriftbooks.com User , 19 years ago
This book is fun to read even if you are not into baseball, but if you are, then its awesome! Its mainly made up of many different stories and experience from American baseball players who played over in Japan. The stories are about the clash in cultures whether on or off the field and most of them are really funny and you could just picture it happening. I feel that the book is more about the cultural differences between east and west and they are just using baseball as a vehicle to illustrate them. There is a movie starring Tom Selleck called Mr. Baseball that I think is a take off from this book. It is also very fun to watch.

Published by Thriftbooks.com User , 19 years ago
On the surface, this is a treatise about baseball in Japan. Only slightly underneath, it's a fascinating work on the difference between Japanese and American culture. The title word Wa comes from the Japanese word for team unity, as opposed to the American interest in individuality.The book goes through both a history of baseball in Japan, as well as challenges American's deal with over there. It covers the trials and tribulations of Americans like Bob Horner, who thrive on the diamond, but struggle off the field. It covers the adverserial relationship between Japanese coaches and their foreign (Gai-jin) charges. Any American going to work in Japan is well advised to pay attention!How is Japan changing over time? Compare how the approval of "different" antics of foreigners changes over time. Learn how some Japanese players follow the model, but as the exception and not the rule. Is the Japanese culture changing, or a surface appearance of change part of the Japanese character? Read the book to find out. Again, it's only about baseball on the surface.How does training differ? The American model suggests individuals can improve, but only to the limit of their ability. The Japanese model in both the field and the office is that there is no limit - strength and success is limited only by effort. This drive leads to a 10-11 month season counting training camp, as well as several hours of strenuous exercizes every day before practice. This is essential to developing the fighting spirit. Again, someone travelling to Japan for business is well advised to understand this.The book is a must for baseball lovers as well as people interested in learning more about Japan. The book is a fascinating work that hides great learning behind Japan under the story of America's pastime.

Is It Really About Baseball?

Published by Thriftbooks.com User , 22 years ago
I have had the fortunate experience of visiting Japan twice and seeing some Japanese baseball. It was an experience I shall never forget. Curious about the subject I picked up and read this awesome book. However, as much as this book is about baseball. And it is filled with some great stories and information. I wonder how much this book is really about the cultural differences between the United States and Japan. Using the history of Japanese baseball and the rough experiences of many of the American players who have tried to play in Japan, the author does an awesome job teaching about Japanese culture. This is much more than a baseball book. Its about baseball and culture, and cultural diffusion, and the differences between Americans and Japanese. This is a funny book, a fun to read book, but you will learn alot about Japan by the time you are done. I have even assigned this book to my students. This book is worth it. An unforgettable read.

Published by Thriftbooks.com User , 23 years ago
If I were teaching a college course on Japan, this would be my text book. Readable, funny and right on the mark. The way Americans and Japanese approach baseball provides an excellent illustraion about how we differ in our approach to work and life in general.
Trustpilot
Copyright © 2022 Thriftbooks.com Terms of Use | Privacy Policy | Do Not Sell My Personal Information | Cookie Preferences | Accessibility Statement
ThriftBooks® and the ThriftBooks® logo are registered trademarks of Thrift Books Global, LLC