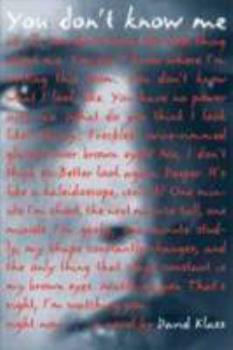 You Don't Know Me

Moving, wholly involving, original, and emotionally true, You Don't Know Me is a multilayered young adult novel that presents a winning portrait of an understandably angst-ridden adolescent. John ("My father named me after a toilet ") wrestles with the certainty that no one really knows him -- not in his miserable home, and certainly not at school. It's true that no one can guess his hidden thoughts, which are hilarious, razor-sharp observations about...

Get to know John..

Published by Thriftbooks.com User , 17 years ago
I can say that I have never known anyone who has been affected by child abuse, but when reading You Don't Know Me, David Klass, I felt as if I was right there with John. He makes me feel like I am with him watching everything that happens either through his school or home problems, his girl and friend problems, or problems he has with himself. John tells the story of himself, a young teenager, who has little confidence or self-esteem. In the beginning of the book, you meet the main character, John. He is one of the reasons why I love this book. He tells the story from his point of view and it really describes his feelings about everything happening. Although John goes through many difficulties with his life, he makes it through somehow. John gets so in depth about things and how he feels, that it's as if you're feeling and seeing what he is. You Don't Know Me, is full of different situations that John experiences. The problem with his stepfather is very tough for him and he feels as if he can't talk to anyone about it. So, he has to deal with his problems on his own. The challenges that John has to go through keep the book suspenseful. It makes you want to keep reading. I didn't want to put the book down because I always wanted to find out what happens next. John has few friends and it seems like not a lot of people like him. He is in love with a girl he calls Glory Hallelujah. Gloria is in his math class, "which isn't really a math class." Gloria is one of the prettiest girls in the school and John wishes he has a chance to go on a date with her. But the only problem is his closest friend likes her also! John makes up a lot of the characters names so that keeps you amused while feeling bad for him in the rest of the book. Glory Hallelujah, Mr. Steenwilly, Billy Beanman, John's mom and Violent Hayes are just a few of the people in John's world. I feel as if the most important character is John and his soon-to-be stepfather. In the book, they don't give the boyfriend a specific name because John describes him as his soon-to-be stepfather or the man who is not my father. John is convinced that his mom doesn't care about him and "doesn't know him" anymore, hence the title of the book. In the book, John tells about his feelings and hints to what happens with his soon-to-be stepfather when his mom isn't around. He says, "That's right, I'm watching you right now sitting on the couch next to the man who is not my father, pretending to read a book that is not a book, waiting for him to pet you like a dog or stroke you like a cat. Let's be real, the man who is not my father isn't a very nice man. Not just because he is not my father, but because he hits me when you're not around, and he says if I tell you about it he'll really take care of me." He writes the story to his mother because he can't tell her things to her face. He feels that if he writes it down, it will help him feel better, but it never really helps. The larger theme

You give your hand to me, and then you say hello

Published by Thriftbooks.com User , 17 years ago
The phrase "I laughed, I cried" has been so overdone in popular culture that attaching it to a book review is almost pointless these days. I mean, it's an incredibly overused sentence. People who've sat down and watched half an hour of "The Jerry Springer Show" are as likely to say it as people who've read "Les Miserables" cover to cover. I wanted to begin this review of David Klass's fabulous, "You Don't Know Me" by saying it. I'm a fairly hard-core book reviewer and I don't laugh OR cry at books easily. Heck, I can read a Lurlene McDaniels book without cracking so much as a sniffle (not a particularly difficult thing to do, but you get the picture). But "You Don't Know Me" is so well written, so funny and sad all at the same time, that it was literally impossible not to laugh AND cry at it all at once. This is the highest praise I can think to give this book. I state for the record that this is perhaps one of the greatest young adult novels written in the last ten years. So sayeth me. You don't know John. You know absolutely nothing about him. You don't know what he looks like or how he feels or where he lives or what his life is like. Soon enough, however, you begin to learn more and more about him. As it happens, this book takes place from John's mind, a fascinating world of wry sarcasm, dead-pan humor, and ridiculous situations. John negates his existence by telling you frankly that his home is not a home because of the man who is not his father. His mother's boyfriend is a violent horrible person that beats John whenever he gets a chance, but does it in such a way that it leaves no visible marks on the fourteen-year-old boy. At school, John hardly fairs any better. He is desperately in love with a girl that he has nicknamed Gloria Hallelujah and he attempts in band to play a tuba that is not a tuba. It is, instead, a giant frog pretending to be a tuba. John has arrived at this conclusion due to the fact that his tuba does not play music, but rather, croaks. When John finally gets up the nerve to ask Gloria on a date, his world improves and destructs almost simultaneously. Within one week everything will change for John and the only question that remains is, will he survive it? Using humor in a YA novel centered on abuse isn't a particularly new concept. The brilliant "Speak" by Laurie Halse Anderson uses it well. But there's a bitterness to "Speak" that taints it in some way. The sardonic voice of "You Don't Know Me" is saying humorous thinks because of the bleakness of his life, true. On the other hand, you really grow to love John. He's a fighter. He will not kill himself or run away from home when his problems become immense because he feels (perhaps rightly) that to do so would be a form of surrender. I was also impressed that Klass broke the old if-a-gun-appears-in-the-first-act-of-a-play-it'll-be-used-by-the-third-act rule. That takes guts and not a little sly writing. But again, it's because the

You Don't Know Me

Published by Thriftbooks.com User , 18 years ago
I have to admit the first time I picked up this book I was a little doubtful. The first few pages confused me so much that I nearly stopped reading. But I was intrigued so I plowed through. Never have I been happier. This book is amazing. The main character John, narrates from a second person view and it works like a charm. Basically John is a boy who lives in a home thats not a home and has friends that aren't friends. He also has a man, who's not his father, physically abusing him. Despite the serious subject the book can be hilarious at times. He uses sardonic humor to completely draw the readers in. Put simply, this book has vaulted on top of my all-time favorite list, and I've read alot of books. Hilarious and thouroughly moving to the very last page.

Published by Thriftbooks.com User , 19 years ago
This was probably the BEST book I have ever read. I liked the charactorization and the plot. It was very descriptive and I liked how the author ( David Klass ) described everything with so much detail. YOU DON'T KNOW ME is a book about a 14 year old boy named John who deals with everyday problems that average teenagers deal with. Most of the book is about him working up the curage to ask out "Glory Hallelujah", a girl that he has liked forever. Also, he has to deal with his mom's boyfriend whom he calls "the man who is not my father". While John's mother is not around, her boyfriend yell's at John and has verbal meltdowns. John also deals with algebra. John dreads this class the most. His teacher sometimes gives him a hard time about not liking algebra. In about the middle of the book, John actually works up the courage and asks out " Glory Hallelujah". After that, he has a whole new prespective of things. When he enters the algebra class room, he is actually smiling. This is a really good book and I suggest it to kids ages 12~15... it talks about struggles that teenagers have and its interesting to read if you are around that age.

Published by Thriftbooks.com User , 20 years ago
In David Klass's novel "You Don't Know Me," John, the main character, deals with all the things adolesence brings. He fights with his tuba, which isn't really a tuba at all, but a frog pretending to be a tuba, he has a crush on the beautiful, but dim Gloria (Glory Halleluia), and he masters the art of looking like he's paying attention in Mrs. Moonface's algebra class. However, John has troubles other than the normal teen-aged problems. He suffers constant physical abuse from his mother's boyfriend, "the man who is not his father." His mother doesn't know about the abuse, and John is afraid of what will happen to him if he tells his mother. What does happen to him left me breathless, crying, and laughing out loud. This is a fantastic book and a must-read.
Copyright © 2020 Thriftbooks.com Terms of Use | Privacy Policy | Do Not Sell My Personal Information | Accessibility Statement
ThriftBooks® and the ThriftBooks® logo are registered trademarks of Thrift Books Global, LLC