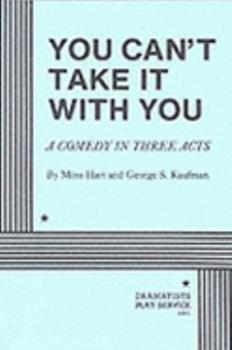 You Can't Take It with You: A Comedy in Three Acts (Acting Edition for Theater Productions)

THE STORY: At first the Sycamores seem mad, but it is not long before we realize that if they are mad, the rest of the world is madder. In contrast to these delightful people are the unhappy Kirbys. The plot shows how Tony, attractive young son of

Published by Thriftbooks.com User , 15 years ago
This play is amazing, crazy and oh so funny. It's fun to read and even better to watch!

Published by Thriftbooks.com User , 15 years ago
A "screwball" comedy that is very well written and superbly crafted, a wonderful theater ensemble piece with action and interesting stage business pretty much constantly going on in every scene. It just percolates with fun from start to finish. It has wonderfully endearing characters and is very indicative of the 1930's America concerns and values. It informs the audience about those times, while teaching a wonderful message of tolerance and the benefits of diversity and individualism. The character of Grandpa espouses a philosophy that is both timely and timeless, and that would benefit all people at all times, if they would just adopt it as a way to live. It is simply to relax and enjoy life. Quit striving for the seemingly important, but actually unimportant things like money, position, unrewarding work for other people. Give up the prejudices and conventional negative assumptions about other people that actually make us unhappy. It seems odd, but is instructive to audiences of today, to know that the play was controversial when written and first produced.

A wonderful play for all ages!

Published by Thriftbooks.com User , 16 years ago
From this wacky family with pet snakes, fireworks, playwrites, and dancers: you learn to expect anything that doesn't make sence, but what you don't expect is them to make sence! That is exactally what happens. When Alice, daugher of Paul and Penny, tells them of the young man that is calling for her, they instantly accept him into the family. His family, however, is not so accepting. My high school has just started preparing for our performance of this wonderful play. We have all fallen in love with the script and are eager to perform. This is a wonderful choice for any theater program, I am sure that anyone can find it entertaining!

Just read the other review titles

Published by Thriftbooks.com User , 22 years ago
As an actor in high school, I played the character of Mr. DePinna, and it was the best theater experience I've ever had. The play has enough mature themes to be taken seriously (unlike many other family life plays of the period), but it is also humorous enough to let the cast enjoy acting in it.

The best comic play in the history of American theater.

Published by Thriftbooks.com User , 23 years ago
"You Can't Take It with You," by George S. Kaufman and Moss Hart, can be quickly described as a comedy about a madcap family. It is, however, beneath its very funny surface, a meditation on the problems of individuality, conformity, and the ways in which one decides to live one's life.The plot concerns the Vanderhof clan, an extended family who all live in a large house situated somewhere near Columbia University. The house is owned by Grandpa Vanderhof, a man who left his life in commerce some years before and now spends his time collecting snakes, throwing darts, and attending college commencements. His daughter, Penny, writes plays on a typewriter which had been delivered to their home by mistake. Penny's husband is named Paul. Paul manufactures fireworks in the base ment with the help of Mr. DiPinna, a gentlemen who came to deliver something and has stayed on for seven years. Paul and Penny have found time to produce two daughters: Essie, who dances ballet to the xylophone accompaniment of her husband, Ed, and Alice, the sole "normal" member of the family.Alice has become involved with the boss's son, and most of the plot revolves around the complications that arise from the son (Tony) bringing his parents to dinner at the Vanderhofs' one night before the dinner was actually scheduled.The plot, however, is only a small part of what makes this comedy (which ran for more than 800 performances on Broadway in a time when 200 performances was considered a hit) an endlessly fascinating, always enjoyable event.The characters are rich, often loopy, and even eminently sensible. Grandpa Vanderhof is a sage, and lines of his run through my head almost daily as little pieces of wisdom with which I make my way through life. "Life is kind of beautiful," he says, "if you just let it come to you." This, in many ways, sums up the theme.It's a play that reads well. From the opening description through to the final line of dialogue it is entertainment, pure and simple. The first act is extraordinary, a mixing of exposition and farce which has rarely, if ever, been equalled. The play as a whole is human, humane, and witty, and wise. It has an almost Taoist quality and a peace at its core which I feel makes it unique. It is a great play which should be seen, read, and experienced at every available opportunity. On top of all this (to quote Woody Allen), it makes me laugh.
Trustpilot
Copyright © 2022 Thriftbooks.com Terms of Use | Privacy Policy | Do Not Sell My Personal Information | Accessibility Statement
ThriftBooks® and the ThriftBooks® logo are registered trademarks of Thrift Books Global, LLC