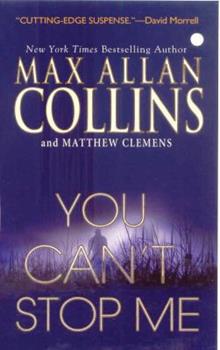 You Can't Stop Me

Small-town sheriff J.C. Harrow made headlines when he apprehended a would-be presidential assassin ? only to come home that night and find his wife and son brutally murdered. This tragic twist of fate launched his career as the host of reality TV?s smash-hit, Crime Seen! But while media star Harrow tracks down dangerous criminals coast to coast ? with the help of viewers? tips ? a killer with a twisted agenda is making his own bloody path to fame...

Published by Thriftbooks.com User , 12 years ago
I started reading this and when I had to put it down I couldn't stop thinking about it. Good story and writing.

Great book -can't put it down !

Published by Thriftbooks.com User , 12 years ago
I started reading this book last night but it was late .Had to quit .Started reading tonight 3 1/2 hours ago and can't quit .I have been listing to the audio because my eyes are so tired .But I'm going to finish it .I'm going to be looking for more of their books .

Published by Thriftbooks.com User , 12 years ago
Max Allan Collins and Matthew Clemens return to the team-based crime trackdown genre with You Can't Stop Me, the first book in their series about former Iowa sheriff J. C. Harrow and the reality show, Crime Seen! The premise feels familiar and I'm certain both authors approached this series with that definitely in mind. After all, they were the initial authors of the CSI: Crime Scene Investigation novels based on the television series, and the Criminal Minds novel franchise. They built up quite a fan base there, so trying to promote a property they created sounds like a winning idea. I enjoyed the fact that the investigation is set within the confines of a reality television show. Obviously the authors have spent time digging into the aspects of how those shows operate, but they also take plenty of creative license whenever they need to spice up the plot. I loved Harrow's off-script promise to the show's audience that they would help him find the killer of his wife and son next season. But that begs a little indulgence. When Harrow is first introduced, we see him as a laidback kind of guy not interested in politicking or gamesmanship. Then, six years after the murder of his family, he's totally into brinksmanship with the powers that be. I understand the motivation, but I wished I'd seen the change within the character. However, if I'd known that off-script speech was coming (even though you really do), it wouldn't have been as emotional. Part of the book concerns itself with recruiting the crew, but Collins and Clemens keeps that pared down to the bone. However, we didn't see enough of the forensic maneuvering take place during the investigation. I did like the corn clue, and I was surprised to learn as much as I did about the agriculture of crop plants as I did. That's one of the reasons I'm addicted to crime shows these days: there's just a ton of technology you get exposed to. Harrow also takes center stage at the beginning and end of the novel, but he fades in the middle at times as the viewpoints shift. I like getting to know the other characters, and the television shows do this a lot, but the television episodes are compressed to 42 minutes of viewing time and doesn't stop unless you've recorded it or are watching on DVD. Reading a novel like this takes a few hours. I like Harrow and I want to root for him. I keep picturing Sam Elliott or Dennis Weaver playing the role. I'm looking forward to the next book and hope the authors get the chance to continue this series. Now that the "origin" story is out of the way, I expect interesting killers to start tumbling out of the woodwork. Should be a proper rogues' gallery, and with the pitfalls of a fickle viewing public waiting in the wings.

i enjoyed this book.

Published by Thriftbooks.com User , 12 years ago
I got this book and downloaded the kindle for pc to see if I could actually read a book from a screen instead of holding a book in my hands. NOT BAD!!! As for the book, I really liked it. So bad that I had to take my laptop to work with me to read the book during lunch. One day when I can afford it I will buy a kindle and hopefully that will elimated all the books that I have that are stacked around.

Published by Thriftbooks.com User , 12 years ago
Great quick read. It sucked me in and led me to neglect my household chores. I'll look for other books by this author.
Trustpilot
Copyright © 2022 Thriftbooks.com Terms of Use | Privacy Policy | Do Not Sell or Share My Personal Information | Accessibility Statement
ThriftBooks® and the ThriftBooks® logo are registered trademarks of Thrift Books Global, LLC