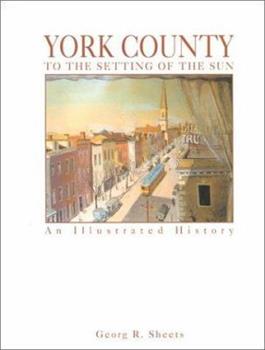 York County: To the Setting of the Sun : An Illustrated History

"Pride in past achievements has been a guiding beacon to Yorkers in forging the community's future," writes Georg Sheets in York County To the Setting of the Sun: An Illustrated History. Those achievements now stretch to more than 300 years, encompassing important roles in the American Revolution and all subsequent wars; a diversified business community that has provided steady prosperity, capable of with-standing financial panics and depressions;...

How a Backwoods Town Helped to Shape the USA

Published by Thriftbooks.com User , 19 years ago
York, Pennsylvania was a town of less than 3,000 when Congress made its home here in 1777 and 1778. The Articles of Confederation were adopted here and France backed the struggling nation with a big infusion of silver. But the story does not stop there. During the Civil War this town that straddles the Mason-Dixon Line became a hotbed on the Underground Railroad; as a primary industrial center, the Confederates raided the place in 1863...distracted by unexpected action just to the west--in a little town called Gettysburg! The author tells a whirlwind story of York County's contribution to the agricultural, industrial and cultural spirit of America and the hundreds of crisp illustrations and color photographs make it a delightful addition to the library of anyone who loves American history.

Birth of a Nation In a Frontier Town

Published by Thriftbooks.com User , 19 years ago
This book is a delight for collectors of Americana.With over 350 photographs, it tells the story of how this frontier town became the seat of Congress and how it contributed to the American spirit through its production of food, clothing and rifles, to mention a few. It's the story of one of the earliest communities in William Penn's "Holy Experiment" and how that town became dominated by the "Pennsylvania Dutch (or German)" culture and then rose as a major leader in military, industrial and agricultural pursuits. It features a well thought-out index and a good bibliography--a must for libraries that want to fully tell the American story--and a good read for those who want a better feel for colonial, Civil War and World War days. Throw in York Barbells, Harley-Davidson motorcycles, York air conditioners and York Peppermint Patties and you have quite a smorgasbord of history. I recommend it for people doing genealogy throughout the eastern seaboard since this town's development affected all surrounding areas.

Published by Thriftbooks.com User , 19 years ago
This 288 page book tells the story of an American community that served as the nation's capital from September 1777 to June 1778 and helps readers understand regional, Pennsylvania and American history through lively text and more than 350 photographs, some in full color. York County, Pennsylvania has served as breadbasket and arsenal for the United States throughout its long and colorful history. Here we are present when the Articles of Confederation are drafted, when the Confederates take over th e town on the eve of Gettysburg...and when the so-called York Plan helped the allies win the two World Wars. York's role in the Underground Railroad unfolds with amazing clarity and a famous witch murder, steeped in Pennsylvania Dutch "powwowing" traditions are recounted with candor and wit. The amazing production of the community includes York Barbells, York Air Conditioners, Harley-Davidson motorcycles, artificial teeth, and enough snacks, both sweet and salted, to feed half the nation. Factory tours have become a mainstay of York tourism, and along the way, we visit one of the largest interstate fairs in existence, a really big Halloween Parade, a smorgasbord of antique dealers and the enchanting folklore of the "Pennsylvania Dutch" still very much alive in farmers markets, street fairs and church suppers, to mention a few venues. Of all the books I've seen on York, this is the most colorful and balanced...and also the newest one since it has been updated, revised and enlarged from a similar book which appeared i 1981.
Trustpilot
Copyright © 2022 Thriftbooks.com Terms of Use | Privacy Policy | Do Not Sell My Personal Information | Accessibility Statement
ThriftBooks® and the ThriftBooks® logo are registered trademarks of Thrift Books Global, LLC