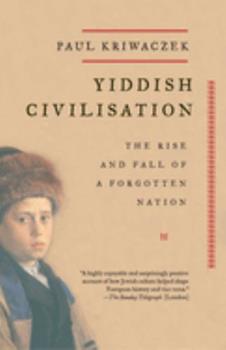 Yiddish Civilisation: The Rise and Fall of a Forgotten Nation

Paul Kriwaczek begins this illuminating and immensely pleasurable chronicle of Yiddish civilization during the Roman empire, when Jewish culture first spread to Europe. We see the burgeoning exile population disperse, as its notable diplomats, artists and thinkers make their mark in far-flung cities and found a self-governing Yiddish world. By its late-medieval heyday, this economically successful, intellectually adventurous, and self-aware society...

A most enjoyable and informative historical review

Published by Thriftbooks.com User , 14 years ago
Paul Kriwaczek's survey of the history of the Yiddish Civilization in Eastern Europe was a most informative and eye-opening text for me to read. It has answered many questions about that phase of Jewish history that had puzzled me for a long time. Why did the Jews migrate to the banks of the Rhine and the Danube in the first place and in what phase of history? And why did they move into the east after having lived in German lands long enough to have adopted the German language? How did that linguistic variation develop that was called Yiddish Toytch? And it went on from there to what was it that split the Eastern from the Western Jews, who were those Chasidim who had separated from rabbinical Judaism, and so much more. So I learned their entry into Germany coincided with the Carolingian Empire. Their eastern migration was part of the migration of Germans, Dutch, Flemish, and French settlers in the 13th century. It was interesting to hear that the Jews and the other Westerners were actually invited by Slavic nobles as promoters of trade and prosperity and that they were given charters of self-government as early as in 1264 in the Charter of Kalisz. One wonders whether it was this autonomy granted from the early beginning that was responsible for the ultimate failure of the Slavic, German and Jewish elements to blend into one. The Kabalistic deviation from Torah and Talmud became popular in the 16th century and Kriwaczek is brutal in criticizing its mysticism and irrationality. He reports about the ba'al shem tov, the masters of the Divine Name, who were anti-rabbinical preachers, seers, and exorcists and who attempted to derive God's Truth out of the Torah in mysterious ways. So then, it was around 1750 that they were united into the movement of Chasidism and became prominent all over the Yiddish realm. It was at the same time that their famous philosopher Moses ben Menachem Mendel spread his advice for the Jews to seek entry into the age of Enlightenment and science. I hadn't known that he was the grandfather of Felix Mendelssohn, the composer, nor that the Jews praised him as the Third Moses - as in "Moses, Maimonides, and Mendelssohn". I won't continue listing the numerous additional items of historical and cultural interests brought forth in this book. I will only mention two further phenomena the author mentions that draw attention even in our time. During the rule of Alexander II in the 19th century, there appeared the Jewish Enlightenment in which, after the abolishment of various anti-Semitic restrictions, many Jews rapidly evolved into a modern, educated and productive society. That, in turn, let loose a new wave of vicious anti-Semitism as the host population was evidently alarmed by the minority's progress and rising power and affluence. It is interesting because it parallels the same upsurge of resentment in the western countries, which also accompanied the rapid growth of Jewish economic and cultural prowess and

Published by Thriftbooks.com User , 15 years ago
This is a wonderful book that gives a wide berth to both Yiddish civilization and Jewish history from the Roman period to the present. The author begins with a commentary on the loss of tradition among Yiddish speaking English Jews and the fake heritage of many of ape Yiddish by enjoying its music as an instant pass to heritage without 'ties' to religious observance. Then the book begins a whirlwind tour of Jewish history and the movements and diversity of the Jewish people in the Roman empire and Spain. It trie to understand which Jews lived in Eastern Europe before the Yiddish penetration that followed the German colonization of Eastern Europe between the 13th and 16th centuries. With wonderful detail we are given glimpses into Jewish life down through the ages. Religious innovation and the great Rabbis of the period are described as well as the pogroms and the diversity of Jewish life. The body of the book covers the period from the 15th century to the 19th when Yiddish civilization, the thesis of this book, crystallized. Here there was the Pale of settlement and the autonomous Yiddish council. This was also a period of upheavel bracketed by the reformation, including the false Messiah Shabtai Tzvi, as well as Moses Mendelsohn and the Baal Shem Tov. We learn bout the Mitnagdim or Lithuanians and get insights into those many many non-Jews who converted over the years for a variety of reasons. In the end we read of the decline and fall of this civilization and how parts of it came to the New World. A wonderful book full of color and understanding, a brilliant work. Seth J. Frantzman

Published by Thriftbooks.com User , 16 years ago
The author captures the broad sweep of history while at the same time personalizing it with vignettes of various areas, families, individuals, and even buildings. He gives the reader a taste of many different kinds of people, famous and ordinary. And he tells this story with compassion and even humor. I've lost count of how many friends and relatives I have recommended this book to. I hope they all read it.

A nice historical panorama of Yiddish life and lore

Published by Thriftbooks.com User , 16 years ago
This is a very good book about the history of the origins and the evolution of Yiddish life and lore, and since personally I wasn't very familiar with it, I really found it highly interesting. Kriwaczek presents a historical analysis of the Yiddish civilization and the Yiddish-speaking population that throughout the centuries developped its own language, culture and literature in Europe. The author states very clearly the purpose of his book right from the beginning: to try to rescue the Yiddish past from its oblivion. He argues that the Yiddish civilization was deeply rooted in Europe and that there was a mutual influence between these Jews and the wider Europe, the Yiddish-speaking Jews forming one of Europe's "founder nations" and being themselves a product of both Jewish and wider non-Jewish culture. Kriwaczek focuses more on Yiddish civilization's successes over the centuries and its economic and intellectual contribution to Europe's progress rather than on the recent decline and destruction of Yiddish life. He traces the origins of Yiddish civilization to the first century destruction of the Temple in Jerusalem and the subsequent dispersion of the exiled Jews. The first two chapters constitute one of the most interesting parts of the book, offering an analysis of the origins of the Yiddish civilization in the divided Roman Empire. The author puts the emphasis on the positive interaction between the Jews and the newly-forming settlements in Europe, with the Jews assuming a pivotal role in international trade. In Slavic lands, for instance, economic prosperity brought steady migration from German lands and together with it the origins of a distinct Yiddish language and culture. Later on, The Yiddish civilization reached its highest point ever in the late Middle Ages when the self-governed Yiddish World stretched from the Baltic to the Black Sea. Further on the book, Kriwaczek traces the development of the language, customs, economic life and legal status of the Yiddish-speaking population of Europe. He also offers case studies of key centres of Yiddish life, prominent figures, writers and thinkers, like the 19-th century philosopher Moses Mendelssohn or the 17-th century autobiographer Glückel von Hameln. Towards the end of his book, the author details the gradual decline of the Yiddish culture in Europe, with the loss of autonomy, internal conflicts and increasing prosecution. He also briefly mentions the English and American offshoots of a vanished european Yiddish civilization. This is a very interesting, easily accessible book indeed, writen in a plain, breezy style. Besides, it really is an informative and innovative work on the Yiddish civilization and culture, at least if you're somewhat interested in this subject.

Published by Thriftbooks.com User , 17 years ago
Paul Kriwaczek turned to history after having been for many years a television program producer, and there is a strong journalistic and pictorial flavour about this book. This makes it very readable and enjoyable. There are many personal touches in it; quite a lot of interesting information about matters that are not strictly germane to his subject; and a number of intriguing and illuminating comparisons between the distant past and more recent periods. The first third of the book is not really about Yiddish Civilization at all, dealing as it does with the history of the Jews from the time of the Diaspora to the medieval period when something like a Yiddish identity emerged among the Ashkenazi Jews. In his Bibliography he comments that general books on the history of the Jews are "disappointing in their lack of attention to eastern Europe during the earlier medieval period", and it is this first third of the book that I found most original and that advances a number of theories which challenge commonly received ideas about Jewish history. The first is that Kriwaczek has the first Jews arriving in Eastern Europe from the East and not from the West. Many Jews of the Byzantine Empire lived on the Northern coast of the Black Sea, and during the persecution of the Jews from the 7th century onwards, many more of them moved to these outlying parts of the Empire, where the writ of Constantinople could not be so easily enforced. But across that area there swept wave after wave of nomads from the East who surged across the steppes and often deep into Eastern and sometimes even into western Europe. The Jews mingled with them, many of them were swept along with the waves and many remained in those areas when the nomadic tides receded. These nomads are often generically referred to as "Scythians", although the Scythians proper were replaced by Sarmatians, Alans and other tribes. Though many theories have been advanced for the origin of the word Ashkenazi, Kriwaczek says that the word Ashkenazi is actually derived from the Semitic name for the Scythians, a-Shkuz. (The problem seems to me that these nomadic waves belong to a period that had ended before the 7th century.) So there were already many Slavic Jews living in Poland, Bohemia and Austria before the arrival of Jews there from Germany. The second of Kriwaczek's challenging ideas is that there is no evidence in Jewish or Gentile sources for the generally believed idea that the Jews of Germany fled to Poland from persecution during the crusading period - only that they often fled from insecure places in Germany to more secure ones in the same country. The Jews who did arrive in Poland, Kriwaczek says, were not refugees but part of a general German penetration into Slavic lands during that period, sometimes as conquerors, but sometimes invited by the rulers of these lands, who valued the skills that Germans - Christians as well as Jews - could bring to their backward countries. The Jews from Germany, b
Trustpilot
Copyright © 2022 Thriftbooks.com Terms of Use | Privacy Policy | Do Not Sell or Share My Personal Information | Accessibility Statement
ThriftBooks® and the ThriftBooks® logo are registered trademarks of Thrift Books Global, LLC