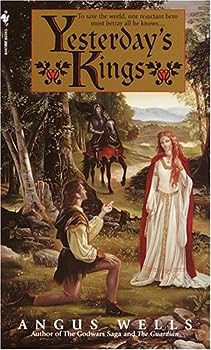 This description may be from another edition of this product. From Angus Wells comes a stirring tale of magic, adventure, and passion as only he could imagine it — the saga of two ancient peoples, long divided by a bloody past, and the courageous young man who...

Published by Thriftbooks.com User , 14 years ago
The other reviews give a nice desciption of the story. This is typical Wells fantasy. Very well thought out and told. Unfortuneately Mr. Wells died in a house fire in mid 2006, so this will be his last book published. If you are a fan, Mr. Wells wrote under a number of pen names, mostly western novels. A simple search for him in Wikipedia will give a nice bibliography of his works.

Published by Thriftbooks.com User , 19 years ago
Yesterday's Kings is the story of two races: the Kandarians and the Durrym. The Durrym were forced out of their ancestral lands by the iron-bearing Kandarians so there is little love lost between the two peoples. The Durrym made a new home for themselves across the river, which they use as a barrier to keep the Kandarians out. There they shape nature with their magic and are involved in their own petty clan disputes. Little do they know that the Kandarians are looking at their border with greedy eyes. The Kandarians are running out of room for their people and the church has found a way to cross the barrier to the Durrym world.Cullyn is a simple woodsman whose greatest desire is to buy himself a fine horse. He lives in the forest in harmony alone and does not really understand the village people. When Lofantyl, a Durrym, befriends him, Cullyn begins to see the Durrym as people instead of traditional enemies. Lofantyl falls in love with Adris, Lord Bartram's daughter (a border lord who keeps the Durrym out of Kandaria). He risks everything to visit her in the keep and is captured. Lofantyl's kinsmen come and rescue him and kidnap Adris. She is in love with Lofantyl, but not sure if she can be happy among the Durrym. Lofantyl's father, Isydrian, doesn't like Kandarians, but he is hoping that the Kandarians will attack so that he can send them to his enemies and take over their land.Meanwhile, back in the forest, the priest Per Fendur has found out that Cullyn was friends with Lofantyl and intends to torture information out of him. Cullyn escapes with Laurens, a guardsmen, and seeks out the help of Eben, a half-Durrym, half-Kandarian wizard. They escape over to Durrym land, where they fall into the hands of Isydrian's enemies. There Cullyn falls madly in love with the lord's daughter and becomes champion for a battle of arms to win the lord's daughter and to somehow make peace between all of the warring factions.It was a little frustrating to read this book, because it had so much potential to be much more than it was. In many ways, this is the classic tale of Britain and the fey folk who lived there before men with iron chased them out. Except here, the fey folk simply relocated and are still a force to be reckoned with. The plot was fast paced and kept the reader interested, but there was little or no character development, which was disappointing. Cullyn and Lofantyl fall in love literally at first sight and are willing to go to any means to be with the woman they want to wed. Cullyn, as the main character of the story, was the least developed ironically. He goes from being a simple forester who has never even held a sword to a champion in Durrym where he jousts and swordfights with a battle trained Durrym. This is weakly explained as his being the syn'qui or someone whom fate revolves around. Also, it would have been nice to get a little more information on the different cultures and how magic differed between them as it g

A whimsical work of fantasy

Published by Thriftbooks.com User , 20 years ago
Many years ago, people crossed the sea and using steel armor and swords to defeat the indigenous population, the Fey. Forced to retreat, the Fey also known as the Durryn, crossed the Algador River and set up a magical shield to keep the Kandorians away from them.Centuries pass and the Kandorians vastly multiply needing new land. The current King and the Church unite to find a means to penetrate the Durryn barrier.Cullyn lives in the forest, wanting nothing to do with the Kandorians and their ever-expansive requirements. He refuses to sound an alarm when he meets and befriends Lafantyl, the son of a Durryn Lord. Cullyn allows Lafantyl to use his home as a place to rendezvous with a border lord's daughter. When the Kandorians discover the trio's activities, they move forward expecting manifest destiny to enable their latest expansion.The Angus Wells realm is similar to that of medieval England and France except that in his world the Fey is a force and not just mythical legends. Cullyn who enjoys his simple, back to nature existence becomes the catalyst of events between the Kandorians and the Durryn thus, providing readers with a hero for those who enjoy Beowulf, the Hobbit tales and similar high fantasy novels.Harriet Klausner
Copyright © 2020 Thriftbooks.com Terms of Use | Privacy Policy | Do Not Sell My Personal Information | Accessibility Statement
ThriftBooks® and the ThriftBooks® logo are registered trademarks of Thrift Books Global, LLC