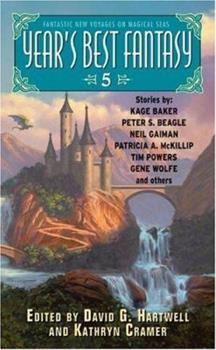 A companion volume to Year's Best SF, this fifth anthology of outstanding fantasy tales features contributions by such acclaimed fantasy authors as Kage Baker, Peter S. Beagle, Neil Gaiman, Patricia A. McKillip, Tim S. Powers, and Gene Wolfe, in a collection of the best short fantasy fiction of the year.

Another year, another collection of great fantasy stories

Published by Thriftbooks.com User , 16 years ago
For the past five years, editors David G. Hartwell and Kathryn Cramer put together a new Year's Best Fantasy book, and every year it is a thoroughly enjoyable read. I may not agree with all of their choices, but I rarely find a story that I really didn't want to read. This year's 5th edition is no different. There aren't as many stories in it that make me stand up and pay attention, but all of them are quite good, even the ones that I have a bit of a problem with (stand up Joel Lane). Even better is the wide range of sources the editors draw from for their choices. A great number of them came from the book Flights, which I haven't read, so there weren't too many stories that I was already familiar with (though since I am now subscribing to three different short story magazines, some of them have been read before). Thankfully, some of the regular contributors to these anthologies (Neil Gaiman, Tanith Lee) don't annoy me like they have in the past. Lee's writing has never been my favourite (though I did like her "Moonblind" in last year's book), but "Elvenbrood is a very strong story about a shattered family who is attempting to move on, and the weird things in the woods outside that want the daughter as part of a pact that the father made. Gaiman finally moves on from the "weird character in the story tells a story" motif, though just barely, with "The Problem of Susan." Like "Beyond the River" (discussed below), this is a story of an interviewer visiting an author, though Gaiman's story goes in a different direction and takes a bit more of a horrific turn at the end. The one story I had a problem with was "Beyond the River," by Joel Lane. A young journalist goes to visit an old children's book writer for an article on her life, as well as the breach of contract charges that have been brought up against her by the company that has bought her books. It seems they want to re-issue them with a lot of changes to make them more "accessible" to the modern reader, which she refuses to do. It's a pointed story about the publishing business, but it has a major misstep that threw me out of the story. It takes a weird turn when the interviewer, a woman, is asked to spend the night at Susanne's house because it's late, and the interviewer starts talking about whether or not the invitation was sexual or a seduction. While this may be a normal first question in a male-female meeting, it's not in a female-female meeting when there has been no hint of sexual tension before that, and there has been no hint that either of the characters are gay. It felt completely out of left field. Plus, the storyline is tremendously heavy-handed in its vilification of the mass-publishing market and how book lines can become mass-produced. The world that Susanne introduces the interviewer to is kind of interesting in a fairy-tale sort of way, but these two things made the story much less enjoyable to read than it should have been. For me, one of the strongest st

Published by Thriftbooks.com User , 16 years ago
I am only through the first six stories and all I can say is WOW! Usually, I question the selections by some best of anthologies, but Mr. Hartwell and Ms. Cramer hit a home run with their selections. So, far, Robert Reed has taken me to an alternate world where dragons are its dinosaurs; John Kessel has taken me on a Wonka-like ride to the kindest bank in the universe; and, Dale Bailey has taken me to the end of the world with a mixture of sex and booze. Great!
Copyright © 2020 Thriftbooks.com Terms of Use | Privacy Policy | Do Not Sell My Personal Information | Accessibility Statement
ThriftBooks® and the ThriftBooks® logo are registered trademarks of Thrift Books Global, LLC