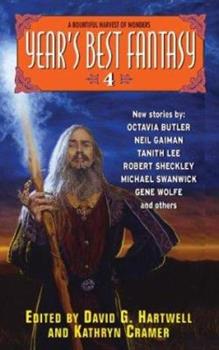 There is magic in our world . . . and in others. The fertile imagination can cultivate wondrous things, aided by ancient myths and memory, enduring childhood dreams and desires, and the power of cultural archetypes. Once again, award-winning editors David G. Hartwell and Kathryn Cramer reap a magnificent crop of superior fantasy short fiction -- the finest to blossom over the past twelve months. A cornucopia of remarkable tales from some of the field's...

Some good stories, though not as good as last year's

Published by Thriftbooks.com User , 17 years ago
Having recently finished David G. Hartwell and Kathryn Cramer's Year's Best SF 9 because of Kage Baker's story, imagine my horror when I discovered that, for the first time since Book 1 of their Year's Best Fantasy series, there would not be a Baker story in this year's edition. I decided to soldier on, however, as the other stories have always been exceptional. I would just have to read a book that did not contain a Baker story. *shudder*Now, all kidding aside (I love Baker, but I'm definitely exaggerating above), the stories in Year's Best Fantasy 4 did not grip me like they have in past years. In fact, going back and writing out the story titles and authors for the list below, I'm having trouble remembering what a few of them are about. Some are charming in their own way, but didn't excite me. Others left me with disturbing images (and not the pleasurably disturbing ones that good horror novels leave). "Catskin," by Kelly Link, is about a witch's son and the cat that has become the dead witch's revenge. The cat creates a cat suit for the boy out of the skin of all the other dead cats that the witch had taken care of, and they go out to avenge the witch, dealing with the other witch who poisoned her. Not my cup of tea. Even the mostly reliable Michael Swanwick's story isn't up to his usual standard, though it is mildly entertaining. "King Dragon" is about a world of elves and dragons, but this world is brutally technological. The dragons are intelligent, but they are also mechanical constructs. In an attack on a village, one of the dragons crash-lands, demands that the village cater to him in order to eventually fix him, and takes a boy to be his eyes, ears, and feet. The boy becomes very powerful in the village, a resistance group forms and the boy has to eventually decide whether he likes the power he has (despite the horror of his master) or if he is loyal to his village. It's an interesting story, but I found I didn't really like the atmosphere that much.So what's good about Year's Best Fantasy 4? There are three really good ones. "Basement Magic," by Ellen Klages, is about a young girl with a horrible stepmother, and a maid who knows just a little bit of that voodoo that you do so well. She quickly befriends the girl and, after seeing how the stepmother treats the girl, decides to help protect the girl with a couple of spells. The girl takes things just a little too far, however. This tale was very sweet, but not too sweet. The characters are interesting and I just loved the friendship that grew between these two people. The ending is actually quite surprising, and sad in a way. I loved it.Another good one is "Dragon's Gate," by Pat Murphy. In this one, a girl tells a story of the ice women in a bar near the glacier. They are upset and her mother goes into a coma-like state. The girl must travel up the mountain pass and get some blood from the dragon there, the dragon that has killed every expedition that has gone
Copyright © 2020 Thriftbooks.com Terms of Use | Privacy Policy | Do Not Sell My Personal Information | Accessibility Statement
ThriftBooks® and the ThriftBooks® logo are registered trademarks of Thrift Books Global, LLC