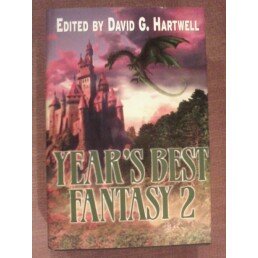 This description may be from another edition of this product. Undreamed-Of Wonders From The Farthest Reaches Of Imagination In this second volume of the previous year's finest short fantastic fiction, acclaimed editor and anthologist David G. Hartwell showcases...

Published by Thriftbooks.com User , 19 years ago
I don't read too many short story collections. I'm usually too immersed in novels to take the time to read them. However, last year, I was browsing through the bookstore and saw an intriguing cover for Year's Best Fantasy, edited by David G. Hartwell. I picked it up on a whim, and loved it to pieces. I made a point to keep an eye out for this year's volume, and scooped it up as soon as I got a chance. This collection is just as good as last year's, and well worth a look-see from the choosy fantasy reader.This book contains all sorts of fantasy types. There are urban fantasies that take place in the modern day with fantastical elements, fantasies that have traditional wizard type characters, religious fantasy, and many more. It's all here in this one volume. All of the stories (bar two) are at the very least interesting. The overall quality of this book is excellent, however, with most of the stories (with the exception of the Ursula Le Guin story at the beginning) being short enough for you to read right before bed. The best story in this book is the first one, "The Finder" by Ursula Le Guin. It's reprinted from her Tales From Earthsea collection of stories. After reading it, I had the urge to go out and read the rest of the Earthsea books, as it was that good. It's the story of Otter, a young son of a shipbuilder. The story takes place in the distant past in relation to the other Earthsea books, in a time when magic was looked down upon and feared. Otter has some magic power, especially the ability to "find" things by thinking about them. He is captured by the "king" of the area and given to the king's wizard in order to be made useful. The story becomes one of Otter's attempts to escape, how Otter learns to use his powers, and how he becomes a part of Earthsea history as well. The story is at times poignant, and at other times just plain fascinating. Le Guin has such a wonderful sense of character and setting that she literally draws you a picture. Otter is well-portrayed, going from young innocent boy to a responsible young man and teacher in the space of the story. The other characters are also interesting, including a truly evil antagonist who is still well-rounded, even though the reader hates him. He's not a cartoon character, which is very nice. This is the longest story in the book, at 95 pages, and it's worth every one of them.Then there is "Apologue," a 2-page story by James Morrow, where three former big-city nemeses (a giant ape, a giant lizard, and a giant rhedosaur) return to New York to help out in the aftermath of the September 11th attacks. I couldn't believe that this much feeling could be contained in a 2-page story, but Morrow does it. It is a truly touching tale of formerly destructive beings doing what they can to help. It really is a moving experience to read this one. If you simply do not want to buy this book, then you should quickly read this story in the bookstore. It almost brought a tear t
Copyright © 2020 Thriftbooks.com Terms of Use | Privacy Policy | Do Not Sell My Personal Information | Accessibility Statement
ThriftBooks® and the ThriftBooks® logo are registered trademarks of Thrift Books Global, LLC