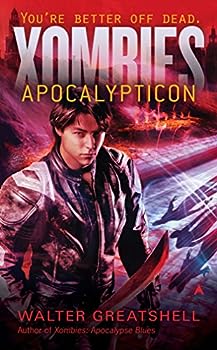 (Book #2 in the Xombies Series)

This description may be from another edition of this product. Survivors of a cataclysmic zombie-making plague leave a temporary safety of a refitted nuclear sub to scavenge for food and supplies on land. But they soon find themselves facing new terrors on the...

Published by Thriftbooks.com User , 11 years ago
Sure, we've seen the zombie-causing virus before. We've witnessed countless movies and books about mindless once-human things bent on contaminating all of the human race. Yet Walter Greatshell's Xombies: Apocalypticon (sequel to his Xombies: Apocalypse Blues) actually succeeds in bringing something new and fascinating to this milieu. Yet again, being a book reviewer has resulted in my starting a series in the middle. I highly recommend starting with the first book, because this is a rather complicated story, and while this book stands about as well as could be expected on its own, I would have had an easier time with some of the plot points if I'd started at the right place! Not to mention there's plenty of interesting material here, and you might as well enjoy it all. Note that this book features a different main character and focuses on a different aspect of the Xombies tale, with Lulu (from the first book) only coming into play tangentially. While there's a fascinating mystery at the heart of the Agent X infection, and some interesting characters, the real story is the altered world in which the characters find themselves. The folks on the sub have their own hardships, and the ones on land have found some highly unusual "solutions" (I use that word very lightly) to many of the dangers the Xombies pose. There are also quite a few social implications raised by the lack of women, and Greatshell definitely has some unusual and fascinating takes on what might happen there. I know it seems like I'm not going into much detail here, and that's because it's hard to get into the nitty-gritty of things without giving away some of the best surprises. The Xombie tale is gory, wild, surreal, gross, and definitely action-packed. It has a macabre sense of humor and isn't afraid to step on toes or go places that might offend some readers. Yet it adds onto that with some great world-building and a fascinating biological puzzle that will certainly keep you guessing. If that sounds like your cup of tea, then I definitely recommend this one! [note: review copy provided by publisher]
Copyright © 2020 Thriftbooks.com Terms of Use | Privacy Policy | Do Not Sell My Personal Information | Accessibility Statement
ThriftBooks® and the ThriftBooks® logo are registered trademarks of Thrift Books Global, LLC