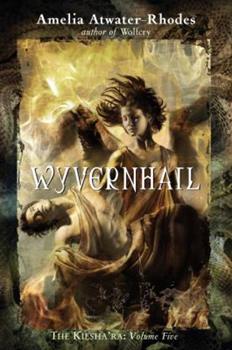 (Book #5 in the The Kiesha'ra Series)

This description may be from another edition of this product. HAI HAS ALWAYS been an outsider. With a falcon mother and a deceased cobra father, she is considered a mongrel by most, an ally by some, and a friend by few. Hai's broken falcon wings are a painful...

6 ratings
Write a review
Published by Thriftbooks.com User , 3 years ago
This series is the bomb, for an fans of the series, I recommend reading the Maever'a series after words with the books blood kin, blood witch and there is another third one that is great! Just ordered them! :)

Published by Thriftbooks.com User , 11 years ago
This book was amazing, and basically redeems the last volume (which really sucked). This is the book where Hai really shines. Hai steps up and takes the responsibility that Oliza threw away. Atwater's storytelling makes this book really good. I felt like I really cared about Hai and the world she lived in.

Published by Thriftbooks.com User , 13 years ago
In Hai's mind, Wyvern's Court disappears in flame or ice, but never seeming to survive the outcome of either. As Hai sees these visions, she tries to make decisions that will end the visions of fire and ice. She tries to stop the visions she begins to understand who and what she is. And maybe she begins to feel at home in the messed up world known as Wyvern's Court? Amelia Atwater-Rhodes has done it again! Wyvernhail is number five in a series of five. This book is one of the best books I have read in a long time, because the suspense of what will happen next or will this come true is always running through your mind. This book fits the genres of horror, science fiction, and fantasy. This book is appropriate for young adults approximately fourteen years of age and up because of some mature content. The ending totally took me by surprise, because it was something I was not expecting. I hope she continues on with the series.

A good close to a good series!

Published by Thriftbooks.com User , 13 years ago
I just finished this over the weekend and I agree with most reviewers that its a good ending. I think Hai is one of Atwater-Rhodes most complex and memorable characters since Zane, Danica and Nicias. Her writing has superbly improved, and I hope she'll write another series that lives up to this one. (despite the tragic book four) If you didn't like Wolfcry, just read this to know the ending and become entranced in this brilliant story again.

Published by Thriftbooks.com User , 14 years ago
Being a half breed, Hai knows her blood lines are considered impure by her paternal serpentine family and by her aviary maternal kin. Neither side recognizes her beyond being a mongrel even with cobra blood flowing inside her. Even more painful proof of being a lowlife outsider is her broken falcon wings that occurred when she lived on Ahnmik Island and envisioned her beloved Nicias with a full blooded flacon female at his side. However, residing at the Wyvern's Court has not proved much better though albeit a bit safer as she is unaccepted by anyone and everyone fears her out of control magic causing havoc. When Hai's half cousin Oliza Shardae Cobriana abdicates the Wyvern's Court throne, the kingdom is thrown into chaos. Hai has visions of the terrible destruction of her new home. It is ablaze and she also sees serpent King Salem dying while Nicias the Falcon guard is unable to save the children or himself. She knows she must do what she can to save the people especially the children, but she feats what it will cost her. Volume five is a strong ending to the Kiesha'Ra young adult fantasy thrillers that has been a deep coming of age saga. Hai is terrific as she feels a responsibly to save the court especially the children although most of the adults have treated her with bias and disdain because of her mongrel status. Readers of all ages will enjoy the finish, but it behooves the audience to peruse the previous four tales as this is a fine series. Harriet Klausner

the end of the series?

Published by Thriftbooks.com User , 14 years ago
Wyvernhail is the continuation of Kiesha'ra series that began with Hawksong. With each progressing volume in the series, Amelia Atwater-Rhodes introduced and immersed us, to varying degrees, to the world of the avians, serpientes, falcons, wolves, wyverns, and crosses in between. As this is the fifth book in the series, it is assumed that the reader has been following the story from Hawksong (or at least knows the gist of what is going on). Atwater-Rhodes has a rich imagination and it is most obvious in this book than any of her previous works. Wyvernhail is narrated by Hai, the daughter of the cobra Anjay Cobriana and the falcon Darien. Hai is tormented by visions of the future with different monarchs' reigns and their fates. The story unfolds as the reader experiences with Hai her personal conflicts as she attempts to work toward a peaceful future. Also in this book, the reader is given much more historical background of the falcons and the ancestors of the avians and serpiente. As in her previous books, Atwater-Rhodes' writing has continued to mature, and her choice of narrating through Hai is a good one; Atwater-Rhodes tends to narrate better through a female character. This book reads like the end after years of conflict, and if it is, it was quite a satisfying close.
Copyright © 2020 Thriftbooks.com Terms of Use | Privacy Policy | Do Not Sell My Personal Information | Accessibility Statement
ThriftBooks® and the ThriftBooks® logo are registered trademarks of Thrift Books Global, LLC