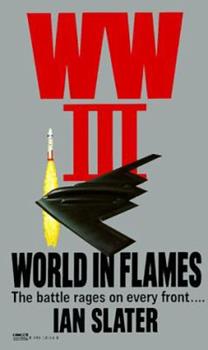 NATO armored dividions have broken out from near-certain defeat in the Soviet-ringed Dortmund/Bielefeld Pocket on the North German Plain. Despite being faster than the American planes, Russian MiG-25s and Sukhoi-15s are unable to maintain air superiority over the western Aleutians...On every front, the war that once seemed impossible blazes its now inevitable path of worldwide destruction. There is no way to know how it will end....

Published by Thriftbooks.com User , 16 years ago
These books for the most part are the most realistic and powerfull books of their genre. With all respect to the author the series (both) are better than average when it comes to the genre. The thing I love most is the realism and detail the author goes into at just the right times to go over the top. Yes there are some short comings in his works (like the freakin militia book with the electrically driven/primed super gun) but for the most part those of us that grew up on this can comprehend and enjoy all his works.

thsi is a good book

Published by Thriftbooks.com User , 17 years ago
this is a good book but once again no tom clancy problems happen in this books sequal

Published by Thriftbooks.com User , 19 years ago
This is one of the best modern war fictions that I've ever read. It rivals Tom Clancy's Red Storm Rising, and inspired me to become an author myself. I love its realism, solid plotline, and-most importantly-its timeless plausibility!

Published by Thriftbooks.com User , 19 years ago
This book is a absolute page turner. Great characters, awesome plot. What makes this series so great is the reality of it all, I can easily see the events as Ian described them taking place. The minor insignificant little 'Technical' errors dont bother me at all....not that picky over things that dont effect the quality of the read. Great book, you wont be disapointed just make sure you start the series from the begining.two thumbs up Ian!

Published by Thriftbooks.com User , 24 years ago
WW III: World in Flames is the 3rd installment of Ian Slater's WW III series, and is the best one so far, even if it is brimming with military innacuracies and errors that in some cases are minor, in others dumb and in others just too blatant to ignore. An example of this is when Slater mentions an "A-10 Intruder". Uh-huh. The A-10 and the Intruder are 2 completely different aircraft!!! Also innacuracies about the calibre of the Phalanx gun system and the weight of the Sparrow air-to-air missile(in the text it seems to shift from 524 to 514 to 5,000 pounds)and what's this? A Russian ballistic missile submraine weighing in at twenty-five tons?! An F-15 fighter weighs more than that! Use you noggin, Mr. Slater! Still, despite all this the interesting use of an SAS unit was entertaining, and the nuclear aspect at the end are probably what saved this book from being rated a 6 or a 7 by me
Copyright © 2020 Thriftbooks.com Terms of Use | Privacy Policy | Do Not Sell My Personal Information | Accessibility Statement
ThriftBooks® and the ThriftBooks® logo are registered trademarks of Thrift Books Global, LLC