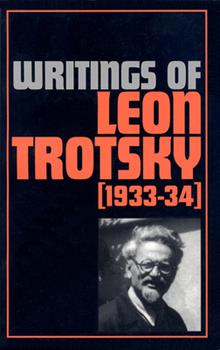 (Book #6 in the Writings of Leon Trotsky Series)

Fourteen volumes covering the period of Trotsky's exile from the Soviet Union in 1929 until his assassination at Stalin's orders in 1940.

Published by Thriftbooks.com User , 14 years ago
If you are interested in the history of the International Left in the first half of the 20th century or are a militant trying to understand some of the past lessons of our history concerning the communist response to various social and labor questions this book is for you. I have reviewed elsewhere Trotsky's writings published under the title The Left Opposition, 1923-1929 (in three volumes) dealing with Trotsky's internal political struggles for power inside the Russian Communist Party (and by extension, the political struggles inside the Communist International) in order to save the Russian Revolution. This book is part of a continuing series of volumes in English of his writings from his various points of external exile from 1929 up until his death in 1940. These volumes were published by the organization that James P. Cannon, early American Communist Party and later Trotskyist leader founded, the Socialist Workers Party, during the 1970's and 1980's. (Cannon's writings in support of Trotsky's work are reviewed elsewhere in this space). Look in the archives in this space for other related reviews on and by this important world communist leader. After the political defeat of the various Trotsky-led Left Oppositions 1923 to 1929 by Stalin and his state and party bureaucracy he nevertheless found it far too dangerous to keep Trotsky in Moscow. He therefore had Trotsky placed in internal exile at Ata Alma in the Soviet Far East in 1928. Even that turned out to be too much for Stalin's tastes and in 1929 he arranged for the external exile of Trotsky to Turkey. Although Stalin probably rued the day that he did it this exile was the first of a number of places which Trotsky found himself in external exile. Other places included, France, Norway and, finally, Mexico where he was assassinated by a Stalinist agent in 1940. As these volumes, and many others from this period attest to, Trotsky continued to write on behalf of a revolutionary perspective. Damn, did he write. Some, including a few of his biographers, have argued that he should have given up the struggle, retired to who knows where, and acted the role of proper bourgeois writer or professor. Please! These volumes scream out against such a fate, despite the long odds against him and his efforts on behalf of international socialist revolution. Remember this is a revolutionary who had been through more exiles and prisons than one can count easily, held various positions of power and authority in the Soviet state and given the vicissitudes of his life could reasonably expect to return to power with a new revolutionary upsurge. Personally, I think Trotsky liked and was driven harder by the long odds. The political prospects for socialist revolution in the period under discussion are, to say the least, rather bleak, or ultimately turned out that way. The post-World War I revolutionary upsurge has dissipated leaving Soviet Russia isolated. Various other promising revolutionary situations, most

Published by Thriftbooks.com User , 18 years ago
This is one of a 14-volume series of writings by Leon Trotsky, who along with V.I. Lenin was a central leader of the 1917 Russian Revolution. These volumes cover the years 1929-1940, when Trotsky led the political fight world-wide to maintain the continuity of Bolshevik's revolutionary perspective and leadership against the reactionary policies imposed by the Stalinist regime in the Soviet Union. Reading Trotsky carefully, one can learn a lot about history and about today's world, as well as how to apply Marxist methods to orient oneself for working-class political action. This volume includes more than 100 articles and letters. They cover topics ranging from the economic depression and the rising inter-imperialist tensions leading to World War II, to the Stalinist frame-up trials in the Soviet Union, the Spanish Civil War, and detailed leadership questions posed in workers movements in different countries at the time. These volumes are lively, pointed and have extensive notes and chronologies to aid the reader today. I'd also recommend some other titles written by Trotsky at this time, including The History of the Russian Revolution, The Fight Against Fascism in Germany, Trade Unions in the Epoch of Imperialist Decay, and The Transitional Program for Socialist Revolution, all available from the same publisher, Pathfinder Press.

Published by Thriftbooks.com User , 19 years ago
Here are some 80 short, incisive articles, letters and interviews: a week-by-week commentary and analysis of world events and the challenges facing working-class movements from one of the great revolutionaries, Leon Trotsky. A central leader of the Russian Revolution, though exiled by Stalin in the late 1920s, Trotsky writes with enduring confidence in the capacity of workers to learn, organize and fight. The economic collapse of the Great Depression; the rise of mass fascist movements; the drive of the Britain, Germany, Japan and the United States towards world war; leadership challenges facing working people, especially with the rise of Stalinism and the subordination of once-revolutionary Communist Parties to the conservative policies of Moscow's bureaucrats-- it's all here, with facts and clear, sharp analysis. In reading these pages, I was constantly drawn to make comparisons with the opening of the 21st century, from the rise of Le Pen in France and fascist movements in the U.S., the growing use of military force by Washington, and the spreading resistance of working people looking for a way out of the crisis we face. The big difference, of course, is the recent collapse of the Stalinist regimes and the myth that Moscow of the 1930s represented a revolutionary way forward. These writings are be an invaluable aid in understanding society today and figuring out what needs to be done next. The book includes fifty pages of notes that help a reader today understand the events and persons Trotsky discusses.

Published by Thriftbooks.com User , 19 years ago
This volume begins with Trotsky's writing on board the ship Ruth the Norwegian government used to deport him to Mexico. His "In Socialist Norway," is a humorous well-written account of how the Social Democrats who ruled Norway in the thirties, buckled under to the pressure of native fascists and Stalin to first restrict Trotsky's right to defend himself against the slanders of the Moscow trials, and then placed him under house arrest until he was invited to Mexico. I found his analysis of Kamenev, Zinoviev, and Stalin himself, in his articles written in Mexico explaining the Moscow trials to be interesting studies in how personal character is a factor in revolutionary leadership and retreat from that leadership. Also very interesting is the correspondence and proposals Trotsky wrote around building the commission led by American philosopher John Dewey that investigated the Moscow trials. As always with all of the Trotsky Writings Volumes, there is a week-to-week, sometimes day-by-day, chronicle of world events, and of Trotsky's struggle to build a revolutionary movement.
Copyright © 2020 Thriftbooks.com Terms of Use | Privacy Policy | Do Not Sell My Personal Information | Accessibility Statement
ThriftBooks® and the ThriftBooks® logo are registered trademarks of Thrift Books Global, LLC