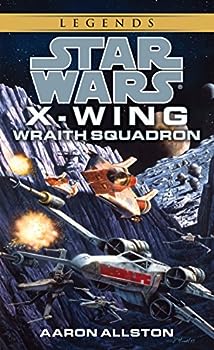 This description may be from another edition of this product. They are the galaxy's most elite fighting force. And as the battle against the Empire rages, the X-wing fighters risk life and machine to protect the Rebel Alliance. Now they must go on a daring...

Published by Thriftbooks.com User , 17 years ago
I won't bother to compare this book to the Stackpole cycle, except to say that it blows it away in every category.This book is, to quote a previous reviewer, "a novel about people in war, not just war", which is how so many Star Wars novels strike me. In all of the novels from Zahn's Thrawn trilogy to Stackpole's Rogue Squadron cycle, I have never been so attatched to the characters as I am in Allston's Wraith Squadron trilogy. Overall, the best comparison I can give is to say that Allston's trilogy is like the M*A*S*H of Star Wars; the characters have life, depth, and personality, with conflicts and friendships forming every step of the way. They aren't superhuman, invincible and emotionally distant like so many other characters. Again, this is "a novel about people in war, not just war", and as such WILL make you laugh, cry, and occasionally cheer out loud.

New blood for the Republic

Published by Thriftbooks.com User , 21 years ago
I think that this is a step in the direction taken by Lucas when he introduced Lando Calrissian. The Star Wars universe is vast and diverse. This helps to make it even more so. As Wedge says in the book 'Not all battles are fought with lightsabres in public squares, some battles are fought in back alleys with vibroblades.' This is a wonderful change from the normal pace of the Star Wars novels. This shows that a side of the Republic that most of us never thought there could or would be. The whole Wraith Squadron set of the X-Wing series is a wonderful and fast read. A must for any true Star Wars Fan, especially the fans of the secondary characters like Wedge Antilles and Wes Janson.

Published by Thriftbooks.com User , 21 years ago
This was an amazing book. I thought it was a very strange idea to form a squadron with commando priority over pilot skills, and especially out of the dregs of the galaxy! I figured that about half of them would die within the first three battles. I was surprised to find that I was WRONG, WRONG, WRONG! The "Yub, yub" joke was hilarious, and the Millenium Falcon trick was ingenious. This was a great continuation of the amazing series. On a scale of one to five, I'd give it: Two thumbs up!

Step aside, Stackpole, there's a new Squadron on the Block!

Published by Thriftbooks.com User , 22 years ago
Well, what can i say! The Wraiths rock! Sure, i was a little disappointed when i first picked this book up for two reasons. 1) It wasn't by Stackpole, and 2) It wasn't about the Rougues I had learned to love through the first book. But as i read on, boy was i glad i had bought it. First of all the transition between the two sets of characters is VERY smooth. It's not just about the Wraiths from the beginning. But beleive me, the Wraiths are every bit as cool as the Rougues. One major difference that you will definitly notice is the addition of much-needed humor to this series (or to any Star Wars book.) Unlike Stackpole, Alliston can make you roll onto the floor laughing at times. In humor, i would definitly rate this book two yubs up :) In contrast, Alliston can also make you cry at times. An example would be the extremely emotional moments when characters die, ones that you got to know, unlike Stackpole's "kill off all the characters i didn't even bother to write about" tactic, like when Riv Shiel died, i found myself asking the question "who was Riv Shiel again?" Well, not happening in this book. Every character has a unique personality and Alliston gives the reader the sense of closeness to the characters in only one novel that took Stackpole four full length novels to achieve. Well, back on the topic of character deaths, when Alliston's characters die, they stay dead, unlike a certain Corran Horn and Mirax Terrik that could "never seem to stay dead" from the past set of books. And the deaths of characters aren't the only thing that will make you cry in this book. Talon Squadron is a major part of this book, and when you find out about Shiner, Donos' "Last Talon" you will be reaching for a tissue in no time. All in all, this book definitly heads the series in a new, yet refreshing direction. I hope if Stackpole re-claims the X-Wing throne, he will learn something from Alliston's exceptional work.

Exciting and funny. A must-read for X-wing fans.

Published by Thriftbooks.com User , 23 years ago
In the original four books from the X-Wing series we got a fresh story with completely new characters to whom we soon felt attached. Wraith Squadron continues that tradition by presenting us an unusual group of upstarts who have to battle their own personal problems at the same time they help in the fight against the Empire, proving their true worth. Being a silly guy myself, I especially loved the duo of Ton Phanan and Face. Don't overlook this book, you'll find yourself laughing and maybe even feeling a knot forming in your throat as you enjoy this story.
Copyright © 2020 Thriftbooks.com Terms of Use | Privacy Policy | Do Not Sell My Personal Information | Accessibility Statement
ThriftBooks® and the ThriftBooks® logo are registered trademarks of Thrift Books Global, LLC