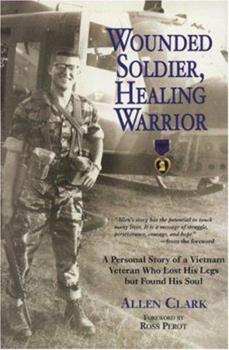 Wounded Soldier, Healing Warrior: A Personal Story of a Vietnam Veteran Who Lost His Legs But Found His Soul

by Allen B. Clark

It was early morning, June 17, 1967, and Dak To Special Forces camp in Vietnam was under attack. A mortar exploded, and West Point graduate Allen B. Clark Jr.'s life was changed forever. This is the story of how one soldier, so gravely injured that both of his legs were amputated, turned his grievous loss into a personal triumph. Clark describes his struggle through a year-long recovery and a severe bout of post traumatic stress disorder, so little...

Published by Wendell , 1 year ago
This book deserves a six-star rating. From its very beginning, I found in "Wounded Soldier" a book to be experienced and not just read. It is too gripping and keenly-sensitive to be finished in one setting. A reader cannot help but feel a kinship and connection with the author when reading how the ravages of war rendered their devastating effects on the seriously-wounded as well as their families. There were moments in the book's beginning when I had to pause and reflect and even feel the thrill which came to the author when his youthful dream of attending West Point was realized after much hard work and diligent preparation. Few can boast of having had such a stellar record to be admitted to the Military Academy before finishing his senior year of high school. This book provides a well-written, flowing and gripping story of how tragedy struck a courageous American warrior and how his near-death experience became an emotional and inspiring account of healing. I especially applaud the author in searching out those who were so instrumental in saving his life and helping him recover as well as making such diligent efforts to recognize and give credit to those who were like his guardian angels all along the way. Those still facing the effects of war, especially those battling the deadly enemy of post-traumatic stress, will find in this book hope in how this unseen wound of war can find assuagement. This is one book I will keep on my shelf to read when I am in need of a paradigm of courage and endurance and when I need to be reminded of the great importance of a spouse and family in times of adversity which can strike in peace or war.

Life is Not What We Expected, but What We Make of It

Published by Thriftbooks.com User , 14 years ago
While the loss of both legs gets your attention, the way Allen has chosen to live his life since is the real story, making him a true American Hero. This book illistrates his courage and struggles openly as he shares the unabashed truth of his entire life with no holds barred. I had the rare privledge of introducing Allen to a group of 200 stout hearted men where he highlighted his book "Wounded Soldier, Healing Warrior". He was an inspiration for all in attendance who learned he is indeed a healing warrior and patriot. You are in for a real treat... an inspiring, must read.

Reporting for Duty Answering His Call

Published by Thriftbooks.com User , 14 years ago
Allen Clark's book is a very poignant and compelling recounting of an American patriot's answering his country's call to arms. Set during the timultuous 60's when America was mired in those unpopular and far-off jungles and ricepaddies known as Vietnam, "Wounded Soldier, Healing Warrior" tells the story of a scrapy Texas kid who yearned to get into the Military Academy at West Point, how he graduated and became an elite Combat Special Forces Officer and then volunteered to go into battle overseas; how he was wounded and knocked down by the enemy and then how he was picked back up and learned to walk yet once again via the Guiding Hand of GOD. This is indeed a timeless story of one soldier's ability to triumph and overcome some of the most haunting and hurtful exeriences of war; A war fought first against the enemy without and then fought again against the enemy within. As a Vietnam veteran who knows both Allen Clark and some of the soldiers mentioned herein, I wholeheartedly recommend this book to anyone who may need to encounter firsthand the very essence of HOPE, COURAGE, FAITH and LOVE.

A Story for Today's War Veterans

Published by Thriftbooks.com User , 14 years ago
Allen Clark's incredible autobiography is a story of service since he was a young boy in Texas. I feel a real afinity for Mr. Clark, since I also felt a "calling" to West Point at a young age. Mr. Clark volunteered for some of the most dangerous duty in Vietnam, when he could have continued in a relatively safe staff job in Saigon. And he suffered very much for answering what he felt was a call to hazardous duty that he had trained for his entire young life. Allen Clark went through his struggle with Post Traumatic Stress Disorder when physicians we just understanding it's implications. As many of our soldiers are returning from Afghanistan and Iraq severely injured both physically and mentally, Allen's story of perseverence and success over adversity, supported and guided by his religious faith, is equally important today. This should be required reading for every individual working at our VA and military hospitals, caring for this current generation of wounded veterans.

Published by Thriftbooks.com User , 15 years ago
This heartfelt memoir provides unflinching historical and personal revelations. Its inspiring to read about this Viet Nam vet's patriotic calling to serve in that war. I was amazed by his youthful idealism and lack of cynicism. I liked the structure of the book which includes passages by key people in the author's story. The long and difficult medical recovery is not sugar coated and the toll it took on his loved ones is palpable. Hopefully other injured soldiers, and civilians as well, can get comfort when they read of his struggles and ultimate recovery, physically and spiritually. I felt that the spiritual component of his recovery is handled matter of factly but with great fervor and authenticity. I recommend this book without reservation.

A Most Unique Vietnam Story And a Unique Soldier

Published by Thriftbooks.com User , 15 years ago
Actually the title of the book could easily have been "The Come-Back Kid". This remarkable man,Allen Clark,was down and out as a result of his injuries and extensive recuperation, but was able to defeat the deamons of dispair, depression, and Post Tramatic Stress Syndrome. His come-back was greater than could be expected. Through his love of Jesus Christ, and by dedicating his life to God, Allen has been able to live a remarkably sucessful life. Because of his personal experiences he is ideally suited for his special project. Allen devotes his energies to the special calling of helping others with problems such as he once had to transform themselves into happy,productive Christian men and women. I know this man. I knew him before his Vietnam injury and I know him now. His story is unique and worth reading. The organization and style of writing is very cleaver.
Trustpilot
Copyright © 2022 Thriftbooks.com Terms of Use | Privacy Policy | Do Not Sell My Personal Information | Accessibility Statement
ThriftBooks® and the ThriftBooks® logo are registered trademarks of Thrift Books Global, LLC