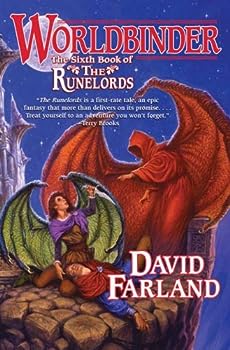 This description may be from another edition of this product. Certain works of fantasy are immediately recognizable as monuments, towering above the rest of the category. Authors of those works, such as George R.R. Martin, Robert Jordan, and Terry Goodkind, come...

The brilliant world of The Runelords.

Published by Thriftbooks.com User , 12 years ago
This is the sixth book in the amazing RUNELORD series, here is a little of the story. After a long exile Prince Fallion and Jazz return home to their once beloved kingdom, alas for the two brothers there is little left of the world they knew, wherever they go they find only charred remain of the once grand castles they had called home, it seems that the evil Loci have done there job all to well. On another world a huge battle is going on between what is left the Giant human population, growing up to nearly eight feet tall these humans are bred for war with their dreaded enemy the Wyrmlings, amongst them is a small man his name is Daylan Hammer, he is an immortal a man of legend a man who may bring peace or doom the the land of giants. On his home world Fallion finds an old castle, a castle he recognizes from his boyhood, while out hunting he and his friend hear screaming, it is a woman's screams, she is being hunted by the Loci, after helping her he takes her back to the castle where upon he has to fight and sly a local warlord, Fallion and his friends enter the castle and find a golden tree, surrounding this tree is the Seal Of The Inferno, Falloin tries to mend the seal only to make a huge mistake and melding his world with the world of the giants into one new world and as two shadow people become one Fallion and his friends and new allies have to fight against old enemies and new alike. This is a great fantasy series, Farland has created a world filled with magic and wonder, evil and darkness, some of his ideas a truly groundbreaking as well as breathtaking, this is an original fantasy series in every way, if you love Fantasy read this, you will not be disappointed.

An excellent series that I continue to enjoy

Published by Thriftbooks.com User , 13 years ago
While I expected something similar to happen, I did not expect David Farland to have things happen the way that they did. I have read and bought his books and I think that David Farland has come up with a very unique story. If anyone enjoys reading Science-fiction/Fantasy books, i highly recommend this book as it is part of one of my favorite book series. It's the idea of Runelords taking endowments from other people and becoming super powerful that has made this series a joy to read.

Published by Thriftbooks.com User , 13 years ago
With his father, the Earth-King dead, Fallion refuses to take forces of others, but he's intent on healing the shattered worlds and thinks that his fire magery can do the job. When he and his small group of followers defeat the evil that has been holding a city hostage, he has a chance--and is able to bring together two of the near-infinity of worlds sliding together. But the true world has been shattered for a long time. Some people had aspects on both worlds--and they emerge stronger than ever. Others, though, had died in one of the worlds, leaving themselves only half a person. Fallion hadn't really thought about how worldbinding would work--or whether anyone would survive the exercise. The world Fallion merges with his own is nearly overrun by wyrmlings and humans had been nearly extinct--until the millions from Fallion's world arrive. Unfortunately, the wyrmlings simply see the arrival as more food. Even worse, Fallion quickly realizes that he fell into a trap--the Lady Despair needs Fallion to complete her plans and has brought him to her world. Author David Farland continues his excellent RUNELORD series in another action-packed fantasy. Fallion learns that his power over fire is equaled by others, that he cannot save those he loves, and that bringing together worlds doesn't just multiply good, it also multiplies the evil forces within each world. Although it contains hope, WORLDBINDER is a fairly grim story. Evil seems unstoppable and the powers Fallion was so proud of are proven inadequate. I'll definitely be looking for the sequel to see how Farland is able to write his way out of the problems he's created for his characters (those who survive this one, at any rate).

Farland (Wolverton) Does It Again

Published by Thriftbooks.com User , 14 years ago
Once again David Farland has created an epic journey that leaves you hanging on in anticipation waiting for the next title (Hidden Daggers '08) and once again i cannot wait until furthur details arise from this sure to be amazing adventure.

Published by Thriftbooks.com User , 14 years ago
When evil tried to take control of the One True World, it shattered the solitary orb into thousands of shadow worlds. On each planet war between pure evil and humanity with the outcome unknown is occurring. The sons of the once powerful Earth King Gaborn, Fallion and Jaz have been living for years as outlaws since their kingdom fell to Lady Despair, ruler of the Death Lords. Fallion is drawn to Castle Coorm where he and his brother once lived. He intends to make a brief nostalgic stop there before going to the underground to find the Seal of the Inferno in hopes of uniting it with the other two seals and creating the One True World again. In Castle Coorm he finds a Tree of Life, which he uses to merge two worlds cataclysmically into one with many people dying. Fallion joins forces with the immortal Daylon Hammer, a resident of the One True World who knows Fallion is the one who can bind the worlds together; this makes him a prize for Lady Despair to control so she can be the ruler of the One True World. WORLDBINDER is more character driven and less action intense than the previous books in the Runelords Saga. When the two worlds join as one, readers will be stunned as innocent people die in the geographical upheaval. The characters get acquainted with people from the other world; learn the geographical changes that alter the landscape; and struggle to forge a new political regime constructed of the two worlds. One thing not changing is that when people allow evil to enter their hearts they start to become minions of the dark and as they lose their humanity. They then eagerly need to bring down human beings who they regard as fodder. Fallion is the focus of the tale as all sides want to own him. WORLDBINDER can stand alone appealing to apocalyptic fantasy fans, but series fans will definitely enjoy David Farland's newest tale. Harriet Klausner
Copyright © 2020 Thriftbooks.com Terms of Use | Privacy Policy | Do Not Sell My Personal Information | Accessibility Statement
ThriftBooks® and the ThriftBooks® logo are registered trademarks of Thrift Books Global, LLC