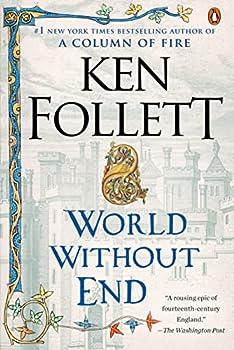 World Without End: A Novel (Kingsbridge)

(Book #2 in the Kingsbridge Series)

#1 New York Times Bestseller In 1989, Ken Follett astonished the literary world with The Pillars of the Earth, a sweeping epic novel set in twelfth-century England centered on the building of a... This description may be from another edition of this product.

Could have told the story in about half the number of pages.

Published by smithrkp , 7 months ago
Loved Pillars of the Earth, but was disappointed with World Without End. Primarily because he repeated situations. There were parts where I could not put the book down, but others where I literally skimmed over the page.

Amazing book. Not in the condition it was listed in.

Published by Samantha. , 1 year ago
What I disliked is simple. If I books is listen as in new condition and when arrives is ripping away from the spine...then you’re told there are no other books like it for a replacement. (There are) ridiculous.

Published by Thriftbooks.com User , 14 years ago
Historical purists will not be pleased. Neither will readers who make their selections based on the length of a book, or people who object to a little sex in their reading (World is hardly pornography), or religious fundamentalists. But those who enjoy ripping epic adventures, historical settings, compelling characters, and plot twist after twist, should have a fine time in World Without End. Yes, it mimics its predecessor, but that is precisely what I, for one, was hoping for. Jumping back into Jack the Builder's city after 200 years was a joy. Few writers on the scene today are capable of creating such appealing protagonists and such hateful villains. Few are capable of filling 1000 pages with heartfelt conflict, human mistakes and foibles, or gut-wrenching turns of event. Follett can do all of this, and has proved it again in World. The treatment of the bubonic plague in World is worthy of comment. Rather than focus upon the horrific physical element, Follett has chosen to represent the vast psychological, financial, and societal consequences of this most devastating of diseases: the breakdown of mores, conventions, and behavior, the inability to produce enough food, the utter uselessness of mere wealth, the failure of the religious establishment to meet the needs of its flock. It is difficult today to imagine that time, and the narrative here helps. Circumstances change, but human nature doesn't. Here's hoping Mr Follett has another Kingsbridge novel in him, set perhaps during the religious and political upheaval the characterized the Tudor era.

Published by Thriftbooks.com User , 15 years ago
Ken Follet is one of my favorite authors. His books stand above even the best books I've read. As an aspiring writer, I always feel inspired after reading a Follett novel and wish I could somehow capture the magic he has with the written word. It is hard to review a book like World Without End. It is incredibly long and also a sequel to Pillars of the Earth. World Without End covers a time span of about 40 years and the main characters remain the same. In "Pillars", the novel covered the lives of several characters. Fans of Pillars of the Earth will no doubt want to read the sequel. Those who have never read Follett should probably start with his World War II thrillers. I never read historical novels, so I don't know how Follett compares. In describing 14th century England , he keeps it simple and assumes the reader can draw most of their own conclusions. The characters are fun and complex, yet nothing new. Follett's novels seem to all have variations on the same types of characters. The novel revolves around four characters: Merthin, the builder, Ralph, Merthin's brother, the amoral knight, Caris, the independent minded girl, and Gwenda, a poor, plainlooking girl. Each character is featured at different times, facing triumph and tragedy. Many, many other characters are woven throughout the story, but they come and go pretty easily. Around page 750, or 3/4ths through the book, Follett introduces the plague, and a lot of main characters are killed. The book changes course at this point and you have a normal novel-length conclusion where the four main characters are the star. I'm a big Follett fan, so I knew I'd enjoy this book. But what keeps me reading page after page. This is a long book and requires a huge investment of time. It's not suspense. World Without End covers the entire lives of the characters, and there are many twists and turns, but none of the plot elements are so strong that they carry the entire book. It's not the characters. As I said before and as mentioned in other reviews, the characters in this book are really no different than Follett's other characters. I kept reading page after page because Follett powerfully portrays (and I'm assuming he has done his research for historical accuracy) the internal and external conflicts that existed in the 14th century. At that time, the church ruled everything, especially in Kingsbridge. They collected rents and taxes, they could charge women with being witches. Also, the citizens of the town believed the monks and nuns had direct lines to God. Only the monks could practice medicine, although their main answer to everything was bloodletting to rid the body of "evil spirits." This was obviously a time where everyone accepted their lot in life. So when Merthin and Caris question the authority of the monks, problems arise. Also in play was the class system. Ralph went into training to be a knight and had incredible power over his subjects, including Gwenda. He could kill men and rape wom

A Masterpiece Sequel To The Pillars Of The Earth!

Published by Thriftbooks.com User , 15 years ago
The Pillars of the Earth has been one of my all-time favorite books, and so I was a little skeptical about how good its sequel could be. My concern was totally unnecessary. World Without End, which takes place in the same town of Kingsbridge almost 200 years later and has the cathedral as its backdrop, is an excellent book and I expect that in time it will also be considered to be a masterpiece. Not having read The Pillars of the Earth will not deter you in any way from enjoying World Without End, as other than the common thread mentioned above, it reads like a stand-alone. Follett packs it all in this 1,024 page book -- love, greed, pride, ambition and revenge. Do yourself a favor and be one of the first on line to get yourself a copy of this very entertaining and memorable book. But be aware that your enjoyment won't come cheap -- the retail price of World Without End is $35. I think you'll find, however, that it is worth every penny.

Published by Thriftbooks.com User , 15 years ago
I am a big fan of Ken Follett's work, but know that most authors have occasional "duds", and at over 1000 pages (the British version I bought), I was concerned this would be a bloated, rambling disappointment. I also loved "Pillars of the Earth" when I read it many years ago but had forgotten all but being fascinated by learning cathedral construction techniques, so I was hesitant to read a "sequel" in case this book was dependent on remembering the first one. Still, because I read that this was a well researched and competent book, I decided to take a chance on it. I am happy to report that my concerns were unfounded. The book is long, but it has a lot going on and is not at all bloated. There are several stories being told, but they all interweave and the elimination of one would be a loss. Although it is set in the same location and refers back to some of the original characters, reading or remembering "Pillars" is not required. I enjoy learning about the construction and medical theories of the day and wish this aspect had been further expanded, but if a reader does not, there is not so much of it that it would be detrimental. All in all, if you like historical fiction with plenty of death, love and destruction, this book is highly recommended. The length of the book will dissuade some from trying it, but those who have longer attention spans will not be disappointed.
Trustpilot
Copyright © 2022 Thriftbooks.com Terms of Use | Privacy Policy | Do Not Sell or Share My Personal Information | Accessibility Statement
ThriftBooks® and the ThriftBooks® logo are registered trademarks of Thrift Books Global, LLC