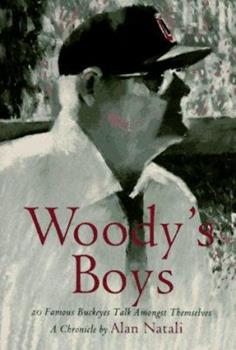 Woody's Boys Is a collection of first person stories, as though the fan could meet Archie Griffin or Rex Kern at a neighborhood bar, and just talk. It spans the entire Hayes era, and it includes Hayes making quarterback Tom Matte return from the east coast to finish his college degree, Hayes explaining to Champ Henson that the carpet in the locker room would make the players soft, and continues through the Gator Bowl incident -- told from a dozen...

A firsthand look at the Old Man

Published by Thriftbooks.com User , 21 years ago
Any football fan, no matter what his favorite team, will wear this book out. Seen through the eyes of a generation of players during practices, games, and off the field, a remarkably consistent picture of Woody emerges. He was clearly not the tyrant that he was sometimes described to be, but rather an old-school coach, tough, honest to a fault, intensely competitive, and highly entertaining. Natali's book captures the atmosphere inside a collegiate team's locker room walls that fans always wish they could see. If you want to immerse yourself vicariously in the world of big time college football, don't miss this book.

Published by Thriftbooks.com User , 22 years ago
This book is a series of narratives on the subject of one Coach Woody Hayes. These narratives are culled from interviews with famous names from Ohio State's football program, mostly those of some of the great players to have donned the scarlet and gray. This collection of anecdotal accounts is assembled in chronological order of the time of the person's appearance at Ohio State, so it was easy to see through the different eyes that viewed the coach as time went on.The writing itself has a conversational tone, making for a smooth, quick read. Each person's story has its own distinctive voice, giving the reader the impression of listening to each of these people go around in a circle and tell their particular part of the tale. Some loved him, some hated him, but all had their opinion about the coach that went so far in defining Ohio State football.Since I am an Ohio State fan, a college football fan and someone fascinated by the history of both, I found this to be a fantastic read. Anybody who shares at least one of those interests and wants to read a very honest account of Woody Hayes would be well advised to pick up this book.

Published by Thriftbooks.com User , 22 years ago
This book is GREAT! The artwork is FANTASTIC! A must have if you are a buckeye fan!

Published by Thriftbooks.com User , 23 years ago
Woody's boys is an excellend read with a lot of behind the scenes stories that define Woody Hayes from the players perspective. The artwork is awsome!
Trustpilot
Copyright © 2022 Thriftbooks.com Terms of Use | Privacy Policy | Do Not Sell or Share My Personal Information | Accessibility Statement
ThriftBooks® and the ThriftBooks® logo are registered trademarks of Thrift Books Global, LLC