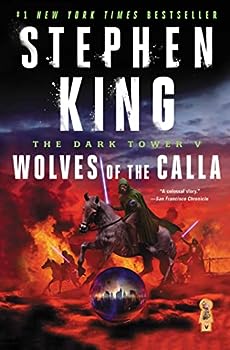 The Dark Tower V: Wolves of the Calla (5) (Packaging may vary)

(Book #5 in the The Dark Tower Series)

Now a major motion picture starring Matthew McConaughey and Idris Elba Wolves of the Calla is the highly anticipated fifth book in Stephen King's Dark Tower series--a unique bestselling epic fantasy... This description may be from another edition of this product.

You're missing out if you aren't reading this series!

Published by Thriftbooks.com User , 18 years ago
Stephen King's fans who don't read the Dark Tower series are really missing out. The "Wolves of Calla" is an impressive, well-written, story that raises questions King has been giving us in other works and ties in one of his very first stories in a unique way. The suspense and drama of the books are fantastic, but I think it's the characters that really set this series apart. In "Wolves of the Calla", each member of the ka-tet has agonizing personal choices to make and their decisions, sometimes flawed, sometimes heroic, make this series something beyond classification. This isn't a drawn-out epic fantasy or a gimmicky tie in of other novels. Like "Wizard and the Glass" this novel is memorable both in itself and in what is does for the series storyline. Jake is growing up. The Gunslinger is growing a heart (has been for some time). He's also losing some of his physical abilities, but he's a much more interesting character than when he started out. Susannah's latest personality would defy belief if written by any other writer, but Stephen King handles her masterfully. And Eddie the former junkie is now the one that's desperate to hold the group together. The battle to project a town's children against seemingly unstoppable "wolves" is just one part of the story. The stakes are raised at the conclusion of this installment by a new character with his own stunning background added to mix and Stephen King tantalizes us with the first real glimpse of how this serious might conclude. I hate the spoilers, so that's all I'll say. Don't miss it.

True to the spirit of this series

Published by Thriftbooks.com User , 18 years ago
Maybe not the best in the series...I still think the fourth book holds that place, but well worth the wait.It is in this book we see the characters finally work together as trained Gunslingers. Each of the characters has a pressing problem and hardship in their lives, and yet they must put them aside to help the children of the Calla . How these characters deal with their own monumental problems and act as true heroes at the same time is a reflection of the fact they have become true gunslingers, following Roland.King also takes the opportunity to let this book show us more of Roland's world and culture. I found the dance Roland did at the start of the book fascinating, and the society of goddess worshiping disk throwing women seemed like they might have walked out of the pages of Roman Mythology. King does a great job rounding the culture, and giving us views of the world just as if we were reading a historical fiction, instead of high fantasy.Wolves of the Calla, at 736 pages, is the longest yet of the series. But the length is justified as King takes time to create characters and places so real, you feel as if you might have been there before in some odd and half forgotten dream. He builds suspense to the final battle with the Wolves, and then makes that battle as fast, and horrible as any real war skirmish. Many complained about the references to pop culture, Kings other works, and aspects of the "real" world, but I thought they only served to make the idea of the Tower as an axis of reality more believable. Making himself a real, yet invisible character in the book gave me a little shiver, after all...if King is real in that world so am I and all his readers. Heh heh heh. It only served to make the sense of so many realities tied in one moment of fate more grand. King also makes the themes of choices and payment for those choices central. Lives are altered forever by the Calla's choice to go along with the Wolves so long. Susannah's brave choice of using her sexuality as a weapon against the portal demon in book 3 is now coming due for payment as the birth of her monstrous child approaches. The choice the Father makes in forcing Roland's hand to not offer Susannah an abortion is about to be paid. Yet, King doesn't moralize these choices. He shows each character as someone who simply made the best choice they could. There is a great tragedy in this, and also a great beauty. I recommend this to anyone who has found their hearts tied to the fate of the brave little Ka-Tet. To anyone who has not read the others, go back to book one first and take the journey to this one. Only then will you truly understand the path that these brave gunslingers have walked so far, to save the tower and all realities. And you will understand how far the along the path they really have still to go.Hold on to your horses, kids. Its going to be a hell of a ride.

Best in the series?

Published by Thriftbooks.com User , 18 years ago
I received a Donald M. Grant Artist Edition of this book a couple of weeks ago and threw aside my life for the next couple of days. I was a little weary because while I enjoyed "Wizard and Glass", I was afraid that maybe Stephen King may have lost his Dark Tower touch from the earlier novels (namely "Drawing of the Three" and "The Waste Lands"). My fears were assuaged and as it now stands, this may be the best book in the series to date. Past characters that readers of the series may have forgotten about resurface and King entwines them into the narrative magnificently. Favorite characters from the series also mature and the climax of this installment literally had me trembling with anticipation. Anyone who may have doubted King's ability in recent years to reel off an excellent "yarn" can rest still as this book reinstills the notion that SK is our master storyteller. Fans of the series will not be disappointed and I encourage anyone who has not yet picked up the DT books to start at the beginning as this is not a series to pick up right in the middle. The only minor gripe is one that I have with most of SK books (don't get me wrong, SK is without doubt my favorite author) in that the book can seem a bit bloated at times, but not nearly as bad as Wizard and Glass (or the dreadful Tommyknockers). I am so excited for this series and I hope that for a wonder, the next book, Song of Susannah gets pushed to next spring instead of next summer, as King pulls a bit of a Blaine the Mono on the reader and we are left with quite a cliffhanger. "Wolves of the Calla" gets my highest recommendation!!!

Published by Thriftbooks.com User , 18 years ago
First of all I'll start by saying that this book is the best in the series so far. I loved the character development. I do have to say that some parts of this book won't make much sense unless you are a well read King fan. However, I believe, this will only make folks all the more curious to learn of the all encompassing world that is the Dark Tower series. I just wish it was summer of 2004 so I can see what happens. Oh well, I waited over five years for this volume, I'm sure I can stand to wait 7 or 8 monthsfor the next one. I'll end by saying that while I am a very quick reader, I was surprised by the fact I finished all 719 pages in under 8 hours. I guess I was ready for this one!
Trustpilot
Copyright © 2022 Thriftbooks.com Terms of Use | Privacy Policy | Do Not Sell or Share My Personal Information | Accessibility Statement
ThriftBooks® and the ThriftBooks® logo are registered trademarks of Thrift Books Global, LLC