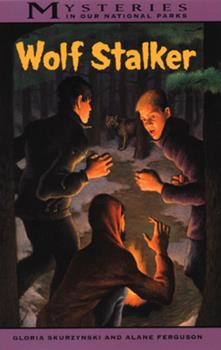 (Book #1 in the Mysteries in Our National Parks Series)

This description may be from another edition of this product. In this fast-paced adventure, the Landons trail a wounded wolf in Yellowstone National Park. The park is abuzz with rumors of a wolf attack. Meanwhile, a killer stalks the woods. Unaware of the...

Published by Thriftbooks.com User , 15 years ago
Wolf Stalker I thought Wolf Stalker was an amazing book it made me want to keep reading and reading and it made me want to keep guessing what was going to happen next. Wolf Stalker is about a boy named jack and his sister ashley and their mom and dad Steven and Olivia. Their mom is a vet and when strabge things happen in national parks they call her to investigate. Their dad is a photogropher and he goes will Olivia to the parks and takes pictuers of the wildlife. Both their parents are foster care parents and they usually take the foster kid on trips with them. In this story Olivia gets called to Yellowstone National Park to investigate on a wolf attack that killed a dog. The aslo bing a foster kid named Troy.When their parents leave to looks and the scene where the dead dog was. Troy runs of to look for a wolf and then Jack and Ashly follow him but then they see two wolfs chase a group of deer and then ashley saw a man shoot one of the wolfs. Then the wounded wolf gets up and limps away. Then Troy runs off after it and Jack and Ashley follow him. Next thing they no they are in the middle of Yellowstone with Troy and the wounded wolf. I would recomen this book to a 10-13 yr old or a person who loves mystery books.

Wolf Stalker: Who will it get next?

Published by Thriftbooks.com User , 17 years ago
Review of the Wolf stalker Have you ever read a book and liked it so much, you wanted to critique it? Well I have, and I want to share a book with you. The title of my book is Wolf Stalker by Gloria Skurzynski. She is a great author and has written ten of these great mysteries. They all go together in order, but each series has different settings. Wolf Stalker was very good and I would like to talk about this first mystery. The author did a good job of making you feel like you were apart of the story. She was very descriptive and made you want to read on! The tension in the story builds with each suspenseful scene!! I would recommend this book for grades five and six. This book was so good that I didn't think it had any weaknesses. This book starts out with two kids (twelve year old Jack Landon and his younger sister Ashley). Yellowstone National Park buzzes with rumors about a wolf attack. A stalker runs through the trees. It's dark, and he is ready to kill, but who is the stalker? At this time, Troy Haverson, a teenage foster child who is a troublemaker, came to live with the Landon family. This is because he lost his mother and his father died. This is a great book if you like suspense and mystery. You will have to read and find out what happens in the Wolf Stalker. Remember, this is only the first out of ten mysteries!

Exciting and Real - A great series for boys or girls

Published by Thriftbooks.com User , 18 years ago
This series is wonderful! It has everything a mystery/adventure story should PLUS more.We picked up Wolf Stalker in Yellowstone and have been buying the series ever since. Listen parents, my son is devouring them, he normally is instructed to read but not with these. The books are factual yet fun. Each book is set in a beautiful park that inspire your imagination and makes you want to visit them. I could tell you the valuable lessons they will learn but I just have to say get this series and watch your kid get obsorbed.

A great adventure in Yellowstone Park

Published by Thriftbooks.com User , 22 years ago
I am a 3rd grade student and thought this book was great! There were some scary parts with children lost in the woods, I learned a lot about what to do when you are lost in the woods. There were great descriptions of wolves and how they behave.
Copyright © 2020 Thriftbooks.com Terms of Use | Privacy Policy | Do Not Sell My Personal Information | Accessibility Statement
ThriftBooks® and the ThriftBooks® logo are registered trademarks of Thrift Books Global, LLC