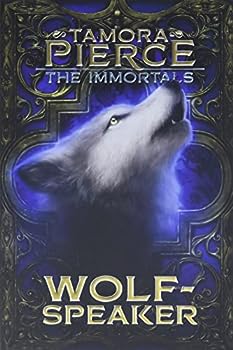 (Part of the Tortall Series and The Immortals (#2) Series)

Daine's magic must save her friends--both wolf and human--in this second book of the Immortals series, featuring an updated cover for longtime fans and fresh converts alike, and including an all-new afterword from Tamora Pierce. When Daine is summoned to help a pack of wolves--dear friends from her old village--she and Numair travel to Dunlath Valley to answer the call. But when they arrive, Daine is shocked to learn that it's not only animals whose...

Published by Thriftbooks.com User , 17 years ago
Pam Ernst The book I read was Wolf Speaker by Tamora Pearce. The genre for this book is science fiction. Wolf Speaker is the second book in the series the Immortals Quartet. To better understand this book, I would strongly suggest that you read the first book, Wild Magic. In Wolf Speaker, a girl has to master her skills in magic while trying to save the kingdom she has grown so attached to. Daine's ability to talk with animals leads her on a quest mush greater than she expected. Her wolf pack originally wanted her to help them save their home from destruction. When she arrives, Daine finds that the people in the land are committing treason against the king. Daine and her friends, Numair and Kit, her dragon, must stop them before the forest is ruined and the kingdom is under new rule. Daine is the only one who can save them all. This book keeps you reading on. The theme is so catching and entertaining, and there is great suspense, that you get caught up in the book. There are so many creatures, and so much description, you can picture what's going on perfectly. I think the way the author portrays Daine, a girl who just arrived in a new place and who just discovered her power, is amazing. Pearce's way of doing this shows a girl with much courage and strength. I agree with this style of writing, because it gives the reader a role model. The reader can be shown that you can do anything you set your mind to, even if you are in a strange surrounding. The book has love for animals and nature that shows that you must respect the environment. I can think that after reading this, I have taken on a better idea of how wild life is being affected by humans, and the disadvantages that come from this. I really liked this book. It has a good idea, and shows what you can do when you set your mind to it. If you like adventure, mystery, and action, I would suggest Wolf Speaker.

Published by Thriftbooks.com User , 17 years ago
The second book in The Immortals series, Wolf-Speaker, is mysterious and brilliantly crafted. A wonderful tale of deep, dark magic, nature, and suspense. Still learning the limits of her wild magic, Daine travels with her teacher, Numair to Dunlath Valley, where they were called by the wolf pack Daine used to run with. The wolves sense trouble, and indeed, when Daine and Numair arrive, they find that not only is the forest being torn up and mined, but that foul magic is stirring up in a rebellion against the Crown-and in alliance with Carthak, the nation, it has been rumored, that is preparing for war against Tortall. During the story Daine makes friends with the young Maura of Dunlath, who has a strong sense of justice, and a basilisk called Tkaa. Separated from Numair by a magical barrier and cut off from the world, Daine must learn even more about herself and her magic alone to help overthrow this rebellion... Another amazing, intense book from Pierce.

"They Have a Different Idea of Whose the Monster Here..."

Published by Thriftbooks.com User , 18 years ago
"Wolf Speaker" is the second of Tamora Pierce's "Immortals Quartet" concerning fourteen-year-old Daine, a young woman who possesses "Wild Magic", giving her the ability to communicate with animals, heal any animal wound, and in this book, to gradually change her form into any animal she wishes. Pierce jumps straight into the story without hardly any background information, so if you are unfamiliar with the fantasy realm of Tortall, I very highly recommend that you don't begin your journey with this book: start with "Wild Magic", or even better "The Lioness Quartet", Pierce's first books concerning Tortall.Daine and her mentor Numair have been sent abroad in order to investigate the disappearance of several of the Queen's Riders, and in doing so Daine receives contact from the Long Lake wolf pack - the animals that she once ran wild with when they helped her avenge her murdered family. Their call to her is for help: their home is under threat from humankind's mining and construction that is destroying the natural habitat, and desperate to help her friends, Daine convinces Numair to help them.But by helping the wolves, the two of them uncover even more secrets: the rulers of Dunlath, Lady Yolane and her consort - and Numair's old classmate - Tristan, are plotting to usurp the thrones of King Jonathon and Queen Thayet, by bribing the war-mongering empire of Charthak with the black diamonds they are acquiring through the mining that cause the animals so much trouble. As you may have already guessed, it's up to Daine, her powers, and the animals to put a stop to all of this, resulting in a plan that is sure to excite all readers once they hear of it.In the overall context of the "Immortals Quartet", "Wolf Speaker" is the least important - in fact you might be able to get away with not reading it with only minor confusion. But it is a great adventure, despite the somewhat cliched environmental issue at the heart of the book, and it drops little hints throughout as to Daine's parentage, her growing magical powers, her relationship with Numair and the growing threat of Charthak.Pierce's range of characters is huge, from the animal kingdom (Flicker, Scrap, Sunclaw, Blueness, Rebel, Brokefang and the Long Lake pack) to the humans (Tait, Maura, Gissa, Belden) to the immortals (Tkaa, Iakoju, Rikash, and of course the Badger-god and Kitten the dragonet, that Daine rescued at the conclusion of the previous book). Each character is well drawn and realistic in their actions and motivations (though I dearly missed the absent Onua), and Pierce is clever enough to mix in shades of grey to her growing war, with the inclusion of Rikash the Stormwing who holds a brotherly affection for the young lady Maura.The "Immortals Quartet" are the best books that Tamora Pierce has to offer, so make sure "The Emperor Mage" is on hand to continue Daine's journey.

Published by Thriftbooks.com User , 20 years ago
I just finished this book about two hours ago-I Just LOVE IT!!!!! I totally do not understnad why people think that this book is not very good. I love it so much-it's wonderful. Tamora Pierce is an extrordinary writer she develops her characters so well!!! (At the end I was sad to let them go, especially Tkaa and Scrap.) I really think that this book is better than the first-and I'm going to read the third book right away. But really I think this will be at least ONE of my favorites-this is the only series I've ever read by her-But I'm going to get all of her books, definatly. I still am really baffled by how many people think that this book is not very good-it's so wonderful! (I know I keep repeating myself, but I can't help it-It's Wonderful!) I remember all of the times I was on the edge of my seat while I was reading it-and I know I was constantly turning pages, even more than the first book. These have the perfect elements-action, adventure-and I'm not totally sure, but I believe there will be a little romance even. Though I am falling in love with Numair myself! Wonderful, wonderful.

Published by Thriftbooks.com User , 21 years ago
I loved this book. It was so fun to read. I think more people should read this book.
Trustpilot
Copyright © 2022 Thriftbooks.com Terms of Use | Privacy Policy | Do Not Sell or Share My Personal Information | Accessibility Statement
ThriftBooks® and the ThriftBooks® logo are registered trademarks of Thrift Books Global, LLC