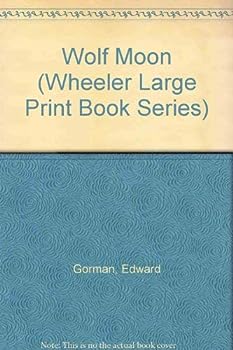 REVENGE WAS HIS ONLY REASON FOR LIVING-- EVEN IF IT MEANT DYING. It wasn't just the memories of his murdered brothers or the ten years in prison that reminded Chase how much he hated Reeves for double-crossing him after the bank robbery. Chase's face was carved with hideous scars from the bloody night when Reeves's killer wolf had attacked & left him for dead. Now he was out of jail & in the same town where Reeves was setting up his next bank heist...

Published by Thriftbooks.com User , 12 years ago
As a professional writer it is a rare occurrence when I come across a book which envelops me so completely I'm able to doff my critical/authorial/editorial/writer cap and just ENJOY the story within. Wolf Moon by Ed Gorman enabled me to do that. This is Western Noir at its very best. Everything clicks here. The writing is as good as anything I've ever seen, particularly when you're talking about an overall genre that is known for its embarrassing hackery, stiff characterization and hoary themes. Not so Wolf Moon. This is a literate and terse novel that hits you hard. Gorman presents the West as it was and not as Hollywood wishes. No riding off into the rosy-hued sunset here. There is violence, and love and duty and honor among all the characters, even the more repellent ones in this story. Even better, Gorman knows the West and presents it, warts and all. He is unapologetic when we learn through the protagonist, Chase, that we will not see a happy ending to his life. But even amid all the raw humanity that Gorman writes about in Wolf Moon there is still room for tenderness and love and human passion. Gorman weaves it all together and makes this one of the most memorable novels I have read this year. I highly recommend this book. Seriously, it's that good. Give it a peek.

Published by Thriftbooks.com User , 15 years ago
I devoured the book in one sitting. I really enjoyed it. The book came out a few years ago and it's unlike any western I've read before. Think of it as western noir, with an emphasis on noir, though you wouldn't know that from the standard "western" cover and "frontier" font. Sure, it takes place in the west and has all the expected genre trappings...but it's the kind of tale Charles Williams, Harry Whittington, Dan J. Marlowe, Wade Miller, Vin Packer and Charles Willeford like to tell. Dark and violent. Grim and doomed. It's about a bank robber who gets double-crossed, goes to prison, and seeks revenge. Sounds pretty standard but trust me, it isn't. The hero of this book is an original...a guy who is literally rabid with revenge. I can't help but wonder how the book would have fared, and the attention it might have garnered, if it was marketed as a weird twist on a dark crime tale instead of western.

For fans of suspense thriller fiction

Published by Thriftbooks.com User , 19 years ago
Wolf Moon by Edward Gorman is a 215 minute, 3 cassette audiobook and the story of a double-crossed ex-convict determined to get vicious revenge on the man who murdered his brother, sent him to prison for ten years, and permanently scarred his face by siccing a killer wolf on him. Highly recommended listening for fans of suspense thriller fiction, Wolf Moon is dramatically narrated by Alan Zimmerman who is impressively skilled at bringing Gorman's dark, compelling tale of determination and brutal ruthlessness.
Copyright © 2020 Thriftbooks.com Terms of Use | Privacy Policy | Do Not Sell My Personal Information | Accessibility Statement
ThriftBooks® and the ThriftBooks® logo are registered trademarks of Thrift Books Global, LLC