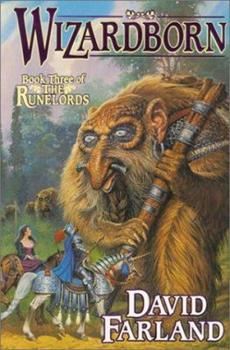 (Book #3 in the The Runelords Series)

Book Three of "The Runelords" Certain works of fantasy are immediately recognizable as monuments, towering above the rest of the category. Authors of those works, such as Stephen R. Donaldson, J.R.R. Tolkien, Robert Jordan and Terry Goodkind, come immediately to mind. Now add David Farland to that list, whose epic fantasy series began with "The Runelords." "Wizardborn "continues the story of the struggle of Gaborn, now the Earth King, who has lost...

Published by Thriftbooks.com User , 18 years ago
I own all of the books in the Runelords series. I have become addicted and just need more! I originally picked up the first book in the series based strictly on the art work on the cover. The art work was done by the same artists that did the covers for the Wheel of Time series by Robert Jordan. My only complaint about the third book in the series is that it cuts off rather abruptly. With no known release date on the next book it left me hanging wanting/needing the next installment but alas it was not to be or at least anytime soon. I highly recommend this series as it is awesome.

The tension mounts and the peril deepens...

Published by Thriftbooks.com User , 18 years ago
"Wizardborn" continues David Farland's Runelords saga, the third of a projected five books. Events in this remarkable fantasy world are rapidly nearing a climax, and in this volume we begin to understand the true dimensions of the many grave threats facing its characters.The first half of "Wizardborn" moves a little more slowly than we're used to, but this is not a bad thing. We get more time to understand the characters a little better, and when events pick up in the later parts of the book, the action doesn't stop until the very last page. Rarely has a fantasy novel left me with less patience for the sequel! I think it was originally supposed to come out earlier, but current information puts Book 4, "The Lair of Bones," on shelves sometime around October 2003.If the book has any weak points, it's that the few side plots Farland introduces don't go very far, and we're left wanting more information. As such, while they do add interesting complications to the main storyline, they seem more distracting than anything else. Still, this is first-rate fantasy, the likes of which is rarely seen. Not to be missed.

Published by Thriftbooks.com User , 20 years ago
While searching desperately for a fun and exciting new fantasy series to begin a few years back, I ran into 'The Runelords' and it was everything I wanted out of High Fantasy, and more. While there are a few who found it did not live up to expectations, I personally found it to be VERY fulfilling. I am extremely picky when it comes to fantasy. Jordan is nothing more than an extended bore-fest for me, however, I found David Farland's storytelling style to *click* with me just right.Book two picked up where 'The Sum Of All Men' left off, and kept me spellbound. I anxiously awaited 'Wizardborn' with anticipation while wondering if Farland could sustain this story so well after 2 well-written stories. The answer to that is YES. Rarely have I read a series of novels that taught me as much as I have learned while reading this series. Very thought provoking as well as entertaining. The characters have been well thought out, and even the Reavers, who at first seemed to be a background annoyance, have turned into very serious characters who think and feel...NOTHING at ALL like what you'd expect from monster-like characters in your average (or even above-average) Fantasy novels. Even the reigning bad guy (Raj) is more than 2-dimensional. Farland is continuously surprising me with this series, something that is almost unheard of in this genre (aside from the explosively unpredictable Song of Ice & Fire series by George R. R. Martin). As entertaining as it isoriginal, the 'Runelords' novels rank up there with some of the best I have ever found. If you are open to a new and thrilling experience in the field of fantasy, get to know David Farland's world...it is an adventure well worth taking, and one I will be sad to see end.

Great Characteriztions in this fantasy novel

Published by Thriftbooks.com User , 20 years ago
Gaborn leads his forces in an attempt to cleanse his nation from the odious Reavers. However, the horde retreats heading back to its underground lair. Reluctantly, Gaborn knows he must follow if he is to ever end the Reavers threat to his by finding the proper path. Dreams of world conquest are long over. At about the same time that Gaborn chases the retreating enemy, the powerful Raj Ahtan realizes that the Reavers threaten his kingdom. However, he deals with a smarter breed that has learned how to more effectively and efficiently fights the humans. Averan, a warden, becomes an apprentice, but her ability to eat Reaver brains becomes more important to humanity. She is able to understand what the Reavers intent is in a collective way and that may enable the fight to finally go underground to the lair of the Reavers. WIZARDBORN, Book Three of the Runelords, is an exciting fantasy adventure that is quite different from the two previous novels as action takes a back seat to understanding of the principla characters. The story line overall is fast-paced, but at times slows down to provide more insight into the key cast members especially Raj. For those who read the first novel (see THE RUNELORDS) this is a bit of a disappointment, as Raj seems more human and less like a killing machine in a sort of evolution similar to Darth Vader from universal villain into a sacrificing father. Still, David Farland has written an entertaining tale that his fans will enjoy once they adjust to something that is a bit different.Harriet Klausner

Published by Thriftbooks.com User , 20 years ago
The first thing I said when I finished was "Wow". Wizardborn is that good. Farland surprised me with his first book. The magic and the issues it raised were all so new and interesting. The second book was good, not as good as the first, but it did delight me on many levels. I didn't know what to expect with Wizardborn, but I can honestly say that it is the best of the three. It's one of the top fantasy books I've read. I stayed up until 1:30 AM three nights in a row. I couldn't put it down.Wizardborn is not just a repeat of the cool fantasy adventure in the other two books. Farland keeps revealing more and more layers to the characters, plot, fascinating creatures, and the magic. The plot takes a wild turn in this book. The reavers have become more than a just some evil horde--they've become real and complex. It almost reminds me of what Orson Card did in his Speaker for the Dead for the piggies. Farland also added more humor in this one and more heft, mixing in powerful issues with all the adventure.Wizardborn was a wonderful read. I highly recommend it.
Copyright © 2020 Thriftbooks.com Terms of Use | Privacy Policy | Do Not Sell My Personal Information | Accessibility Statement
ThriftBooks® and the ThriftBooks® logo are registered trademarks of Thrift Books Global, LLC