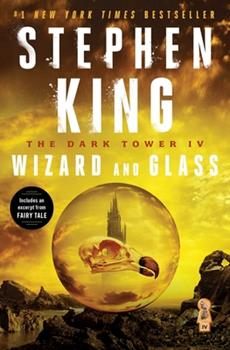 (Book #4 in the The Dark Tower Series)

The fourth volume in the brilliant Dark Tower Series is "splendidly tense...rip-roaring" (Publishers Weekly)--a #1 national bestseller about an epic quest to save the universe. In Wizard and Glass, Stephen King is "at his most ebullient...sweeping readers up in...swells of passion" (Publishers Weekly) as Roland the Gunslinger, Eddie, Susannah, and Jake survive Blaine the Mono's final crash, only to find themselves stranded in an alternate version...

Exceptional story that is hard to put down. Full of Anticipation!!

Published by Andrew , 1 year ago
An amazing read, storytelling at its finest.

The FOURTH time is the charm!

Published by Horror crazy , 1 year ago
I loved the first three books in Stephen King’s phenomenal Dark Tower series, especially the last two volumes, The Drawing of the Three and The Waste Lands. I didn’t think the series could get any better, but I was wrong! The Dark Tower IV: Wizard and Glass tells of one of Roland’s past adventures, and what an exciting adventure it is! Shortly after wrapping up the dilemma with which The Waste Lands kept us hanging, Roland recounts how he and two other men, his previous ka-tet, wandered into a town where a deadly secret deception among a small group of evil men threatened the lives of not only Roland and his friends, but also an entire town and, quite possibly, Roland’s entire world! That sounds like a bizarre way to phrase it—“Roland’s entire world”—but, considering that Roland seems to live an another universe that somehow exists right next to our own, I don’t know how else to put it. Anyway, it’s in this small town that Roland meets the love of his life, Susan Delgado. What unfolds is a love story, but also much more: Although this book is not as fast moving as the others, this is ultimately a suspenseful, action-packed story that delivers masterful storytelling with every page! Because it also delivers a lot of romance, that makes it even better, a tale that will appeal to an even broader host of readers! Since this is not a stand-alone book, it won’t win Stephen King any new fans the way a book like Misery or Cujo might. But fans who have traveled this far with Roland on his incredible quest will be recommending the series to more readers than ever! I know I will!

Published by Thriftbooks.com User , 17 years ago
"Wizard and Glass," Volume IV of Stephen King's fantasy/western "Dark Tower" series is even better than the three books which preceded it. I didn't think it would be possible to top "The Wastelands," Book III, but King has accomplished the task with great elan. The author's tremendous talents and consistency as a writer are evident here. I can only advise the reader not to begin this novel during a busy period in your life, as it will cause you to miss all sorts of deadlines. I really found it difficult to put this page-turner down. The novel opens with a wrap-up of the cliffhanger which began in Book Three, where bizarre Blaine, the psychotic, riddle-loving monorail tries to take the stoic Gunslinger and his companions on a suicide trip to a terminal destination. Given the dark humor, it's a really fun ride. The band of four...and a half, the Gunslinger, Eddie, Susannah, Jake and their talking dog-like pet, Oy the Bumbler, disengage from the wreckage of Blaine, and continue along the path of the Beam toward the Dark Tower. They finally take a rest, around a campfire, while Roland narrates the details of his quest, the whys and wherefores behind his decision to take this particular course. He tells the tragic tale of his lost love, Susan, and his beloved friends and companions Cuthbert and Alain, who all formed a magnificent Ka-tet, (King's word for a group of people drawn together by fate). These characters have been brought up in prior novels and all played a formidable role in Roland's past life...one which will haunt him to the ends of the changing world. "Wizard and Glass" is more a traditional fantasy novel than the other, more darkly fantastic books in the series. The forces of magic aren't often on the side of Roland and his friends, so they must rely on their wits or their weapons instead. Roland's father, the best Gunslinger who ever lived, sent him away from the Inner Baronies and looming danger, with his closest friends Cuthbert and Alain. All were disguised and took aliases. They arrived at their destination, the small seaside town of Hambry, in Mejis, on the outskirts of Mid-World, ostensibly to count the taxable goods for the Affiliation. The trio discovered that there was trouble brewing here also, worse than that in Gilead. They were in much more danger in the Barony of Mejis than they would have been staying at home. The town's officials had secretly defected to the side of John Farson, "The Good Man," whose armed revolution was gradually destroying the world. Farson's group planned to use oil wells and refineries, built during the long-ago Age of the Old Ones, to create gasoline to power weapons of war. These relics of the past, and other resources, lay right outside Hambry. Cut off from communications and support, Roland, Cuthbert and Alain were up against powerful adversaries, men of evil and ill will, as they attempted to foil the plot. On their first night in Hambry, Roland met beautiful Susan Delgado, just sixteen, a

Published by Thriftbooks.com User , 20 years ago
This story rips at every emotion a man could ever have. Love, devotion to his friends, honoring ("remembering the face") of one's father, addiction, coming of age, etc. This story answered so many questions I've had ever since I picked up "The Gunslinger" on a whim. I've heard King called the equivalent of a "Big Mac" when it comes to literature, and almost believed it. After reading the first three books, I was doubtful of this label, after reading "Wizard and Glass", I'm sure it's a misnomer. This book is truly original, and reguardless of how many other people love or hate him, he ranks high in my estimation.

Published by Thriftbooks.com User , 23 years ago
Wizard and Glass is mainline heroin for Dark Tower junkies. Be warned: do not undertake this novel during finals week or if you have housecleaning to do. By the time I was finished, my apartment resembled that of Tommy from "Trainspotting". If you happen to be a serious reader, the length of this novel is a boon. King writes with such fluidity, his characters' dialogue is so real, that the length is a necessity. If you're hungry, you eat a big plate of lasagne; you don't pick a French restaurant where they serve you a thin slice of pate garnished with a little radish rosette. King may not agree with the critics, but he's damn satisfying, and the Dark Tower series is his piece de resistance. Roland lives how we'd all like to live-- doing the right thing, no matter how difficult. He's a hero, but he's accessible. He's so good, he doesn't have to swagger. What's so real about him is that he doesn't have a grand plan; he lives each day as it comes and doesn't worry about ka.Wizard and Glass is not just a great book-- it stands as a fortress against the cynicism and apathy that pervades so much of modern literature. King has the gall to say that some things really matter, and for that his critics will crucify him.

Published by Thriftbooks.com User , 25 years ago
This unbelievably complex and broad tale that Stephen King has been spinning for over the past decade is the most unique world I have ever visited. I refer to the "Dark Tower" saga not as a story but as a world because of King's ability to bring such depth and realism to storytelling that I literally forget that I'm reading and feel that I'm observing. King started his tale not at the beginning, but in the middle, leaving limitless possibilities in what direction the story will take. I have one thing to say to Mr. King. "I hope that it takes you a very long time to get this tale under control." So far in this tale's life, King hasn't taken a single shortcut. It's for that reason that it has taken on such monstrous proportions. For what it's worth, if the story continues for forty more years and fills eighty volumes, I'll continue to look forward to thelatest release of each installment. I would recommend before starting to read any book in the "Dark Tower" series, approach your decision to do so with the utmost of caution. You will be unable to resist reading the rest of the series, the conclusion of which is as unpredictable as it's yet untold beginning. Thank you
Trustpilot
Copyright © 2022 Thriftbooks.com Terms of Use | Privacy Policy | Do Not Sell or Share My Personal Information | Accessibility Statement
ThriftBooks® and the ThriftBooks® logo are registered trademarks of Thrift Books Global, LLC